The comic capers began with Donizetti’s Il pazzi per progetto
(literally Lunatics by Design), a one-act farce first heard at the Teatro
di San Carlo in Naples in 1830. Although the opera held the stage for several
successful seasons in the city, appearing 62 times in 5 different theatres
between 1830 and 1845, it later languished, until 1977 when a revised score was
once again performed in Naples. This GSMD production is the first staged
performance in the UK.

The libretto, by Domenico Gilardoni, is based upon a play by Giovanni Carlo
di Cosenza which was an adaptation of a French farce by Eugene Scribe and
Delestre Poirson, Une visite ‡ Bedlam (the latter had itself been
given operatic treatment by Auguste Bertini in 1824). Gilardoni’s text
certainly has its fair share of miscomprehension and mayhem, and an attempt to
make ‘sense’ of it would undoubtedly result in much head-banging on the
padded walls of designer Yannis Thavoris’s amusing set. But, here goes … 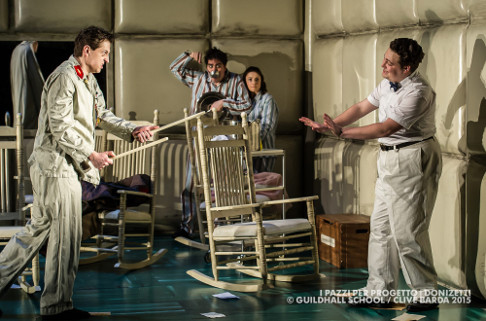 Scene from I Pazzi per Progetto

Set in an asylum in early nineteenth-century Paris, here the
L’Institut de Psychiatrie Experimentale, the plot is almost
impossible to follow but revolves around the attempt by the jealous Norina —
niece of the Institute’s director, Darlemont — and her equally possessive
yet philandering husband, Colonel Blinval, to test each other’s love by
pretending to be insane. Other inmates and orderlies include the eccentric
Cristina, who has been admitted to the madhouse by her avaricious ward
Venanzio, and Don Eustachio, a ‘psychiatrist’ who is actually a trumpeter
who has absconded from Blinval’s regiment. Cristina believes her ability to
recite bleeding chunks of MoliËre, Alfieri and Tasso from memory will
‘prove’ her sanity; the deserter Eustachio reels off his
‘accomplishments’ in an aria which foreshadows the fraudulent fancies of
Dulcamara’s ‘Udite, udite’. Such are the follies and fancies of the
incarcerated. The conflict arises because Blinval has promised to marry
Cristina — just as soon, that is, as his decrepit ‘old ’wife drops dead;
the arrival of the young, evidently full-of-life Norina, throws this plan
off-kilter and the comedy plays out until they all abandon their facades of
lunacy and ‘order’ is restored.

At a time when those suffering from mental disorder were beginning to
benefit from more sympathetic medical treatments and attitudes, Donizetti stuck
with the previous century’s less compassionate approach to the mad, and
designer Martin Lloyd-Evans does not let a single opportunity for ridicule and
hilarity go unfulfilled — including (fittingly for a score which itself
delights in musical parody with Rossini’s Semiramide a particular
target) mockery of Donizetti’s own more ‘serious’ mad-scenes. So, we have
distressed heroines setting light to chairs, an ‘air’ double-bass
obbligato from the increasingly senseless Blinval during Norina’s
aria, ‘Tirsi Lontan da Clori’, and a ‘seduction’ aria — why
does Cristina launch an amorous attack on the timid Eustachio in order
to get him to serve as her messenger?? — which is relished by two voyeur
patients, thrilled by the unexpected titillating interruption to the mundane
routines of the madhouse. 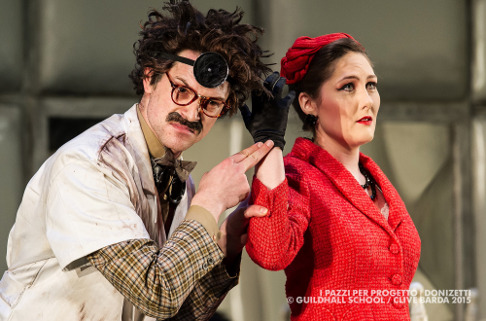 Scene from I Pazzi per Progetto

And, who knew that rest and recuperation for the mad included not just quiet
reading and gentle chair-rocking but also repetiteur-ing? It was an ingenious
move to have a pyjama-clad pianist among the patients, providing on-stage
accompaniment to the recitatives. And, pianist Ben-San Lau’s keyboard
histrionics and dissonant disgruntlement when the singers refused to sing in
the appropriate style were an oblique reminder that rather than the opera is
unusual for a farce in having recitatives rather than spoken dialogue.

Scored for the unusual combination of soprano, mezzo-soprano and five
basses, the dominant contribution is that of Norina, and Laura Ruhl-Vidal
proved well-equipped to meet the not inconsiderable technical demands of the
role. Norina has two big arias, both requiring considerable stamina, and
Ruhl-Vidal’s efforts revealed a sure technique and personable stage presence.
Her elaborations remained crisp and clear throughout the aria de
sortie and rondo-finale; and, she has a fresh, appealing sound,
although she was occasionally under the note.

As Blinval, Szymon Wach began with a full tone, well-shaped phrasing and
characterful charm. His first duet with Norina was engaging but towards the
close he rather ran out of steam vocally, though the comic japes were deftly
executed.Rick Zwart demonstrated similar comic nous as the hapless
Eustachio, and he was the most proficient in the cast in dealing with tripping
Italian. As the blue-stocking, Cristina, Ailsa Mainwaring revealed a
voice of lovely colour and richness, especially in the lower register. David
Shipley (Darlemont), David Ireland (the orderly, Frank), and Milan Siljanov
(Venanzio) were similarly accomplished and well characterised.

The episodes of the introduzione which follows the brief
instrumental prelude are brisk and conductor Dominic Wheeler got things going
at a slick pace, building effectively to the first ensemble, a lively quintet.
But thereafter the momentum sometimes flagged — there is rather a lot of
secco recitative which however enthusiastically delivered did drag
things back. While generally secure, the orchestral playing lacked a certain
breeziness and spontaneity; and, there were some unfortunate intonation
problems in the horns which at one point might have unsettled a singer less
self-composed than Ruhl-Vidal. Together, though, the theatrical and music parts
added up to an enjoyable and stylish whole. 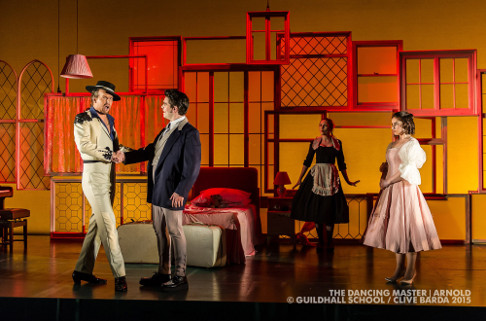 Scene from The Dancing Master

Though composed in 1951, Sir Malcolm Arnold’s The Dancing Master
had to wait until the 2012 ‘Malcolm Arnold Festival’ for its first
performance — at the Royal and Derngate in Northampton (the composer’s
birthplace) by the Ealing Symphony Orchestra under John Gibbons (when it was
paired with Strauss’s Die Fledermaus). This GSMD production was
billed as the first fully staged performance.

Malcolm Arnold’s success as a composer for the screen was considerable. He
composed almost 70 film scores including music for David Lean’s The Sound
Barrier, Hobson’s Choice among them, and he won an Oscar for
The Bridge on the River Kwai. Yet, despite his popular appeal Arnold,
the critics did not — and perhaps still don’t — know quite how to respond
to Arnold’s work, which so blatantly rejected the musical experimentations of
the 1950s and 60s. And, the feeling has lingered among some that the
composer’s music is not worthy of serious listening and acknowledgement. So,
this was a welcome opportunity to hear a score which, as one might expect of a
gifted film composer, is rich of melody and full of wit and impulsiveness.
Wheeler drew very fine performances from stage and pit.

Based on William Wycherley’s 1671 Restoration comedy, The Gentleman
Dancing Master, the opera had in fact begun its life as a screenplay.
Arnold’s friend, the writer Joe Mendoza, had originally written a film for
the actress Margaret Lockwood, but Arnold saw its operatic potential and worked
with Mendoza to fabric a libretto from the screenplay. A satire of contemporary
manners, the national stereotyping in the text may jar with more modern
sensibilities but things dance along frivolously enough.

Miranda, closely watched by her puritanical aunt, Mrs Caution, has been
forced into a lamentable betrothal with her cousin — a Francophile dandy who
prefers to go by the name ‘Monsieur’. Her preferred suitor is Gerard who,
having scaled a ladder to climb into Miranda’s room, is discovered by the
young girl’s over-excited father, ‘Don’ Diego, who has just returned from
his adored Spain. Gerard professes to be a dancing master whose services are
required to bring Miranda’s dancing skills up to Monsieur’s exacting
standards. Diego is duped but Mrs Caution demands to see evidence of Gerard’s
fancy footwork. There are plans for elopement, machinations by Monsieur and Mrs
Caution to prevent the beloveds’ escape, and frequent amorous
‘offensives’ — most startling by Prue, Miranda’s maid, who tries to
seduce the reluctant Monsieur! Tempers rise, deceits deepen, and a secret
marriage ensues; but, confessing all, Miranda and Gerard beg her father’s
forgiveness and seeing the sincerity of their love, he blesses their marriage.
After all, as a ‘Spaniard’ he knew the truth all along. 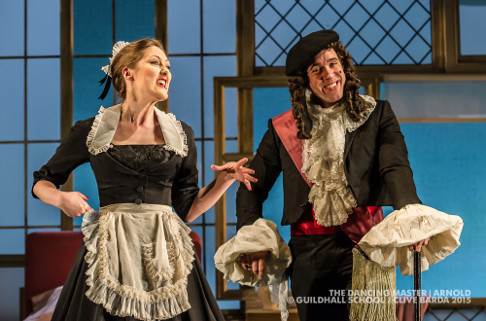 Scene from The Dancing Master

Sets and costumes in both productions were terrific. Just as the padded
walls which restrained those incarcerated in the asylum were replaced now by a
glittering array of assorted window frames — through which the
‘imprisoned’ Miranda attempts escape and Gerard makes his gallant entrance
— so the white lab coats and strait-jackets of the Institute were now
replaced by more flamboyant attire. Miranda’s dresses hung from a rail,
forming a colour chart of luxury from salmon pink to ebony black. The
Hispanophile Diego donned a dashing matador’s regalia while
‘Monsieur’s’ cuffs and curls became ever more extravagant. Richard
Howell’s lighting — unusual juxtapositions of complementary tones —
considerably enhanced the drama, the movements of colour, sometimes sudden,
elsewhere gradual, serving to underscore the alternation of comedy and tender
pathos.

Ranging through a medley of styles — Arnold equals Britten as a master of
musical pastiche— the woodwind-dominated score was a showcase for
some wonderful playing from the young musicians of the Guildhall School of
Music, and there were particularly impressive contributions from bassoon,
clarinet and horn — perhaps the whooping horn brays were the double
entendres that the BBC found too ‘bawdy’ when they rejected the score
in 1952? Wheeler crafted a sufficiently transparent texture to allow the voices
to come through readily. Though full of good tunes, this is certainly not an
‘easy’ sing, and the precision and focus of their entire cast was
admirable, especially in the sextet towards the close.

Alison Rose was excellent as the ill-used heroine Miranda, revealing a
flexible, appealing voice which was capable of comic sparkle as well as sorrow
and sensitivity. Robin Bailey flounced with Gallic immoderation as the foppish
Monsieur, while David Shipley was once again an imposing ‘patriarch’ —and
executed a persuasive fandango. Lawrence Thackeray revealed a gleaming, smooth
tenor as Gerard, but could do with tempering his full voice with more varied
dynamics. Ailsa Mainwaring demonstrated a lovely bloom to her mezzo as the
puritanical Mrs Caution and Emma Kerr was convincing as the conniving, cunning
Prue.

There were some shared motifs which united the evening’s two-some:
on-stage musical charades, characters with a penchant for ‘eloquent’ French
interpolations. With all the conflict resolved, and the chaos — at least for
the time being — unravelled, the window-walls of Miranda’s bed chamber were
raised and the twirling newlyweds were joined by Donizetti’s cast of crazies
for a final champagne-fuelled caper. This may have been a light-hearted evening
but it was a serious musical undertaking — and delightfully sung and played.