Author and playwright Pierre-Augustin Caron de Beaumarchais wrote a trilogy about the Almaviva family: Le Barbier de SÈville (The Barber of Seville), Le Mariage de Figaro (The Marriage of Figaro), and La MËre Coupable (The Guilty Mother). Los Angeles Opera presented operas based on the Beaumarchais trilogy during its 2014-2015 season, but not in the order of their composition. 1786 saw the premiere of Le Nozze di Figaro, (The Marriage of Figaro) by Wolfgang Amadeus Mozart. Gioachino Rossini wrote his opera, originally entitled Almaviva, o sia L’inutile precauzione (Almaviva or the Useless Precaution), on the play Le Barbier de SÈville in 1816, and it was not until 1991 that John Corigliano’s The Ghosts of Versailles, inspired by La MËre Coupable, saw the light of day.
In January, Los Angeles Opera gave us Figaro 90210, an opera that uses Mozart’s music but has an updated take on the libretto. Angelinos saw the premieres of The Ghosts of Versailles and The Barber of Seville in February and will see performances of The Marriage of Figaro in March and April. 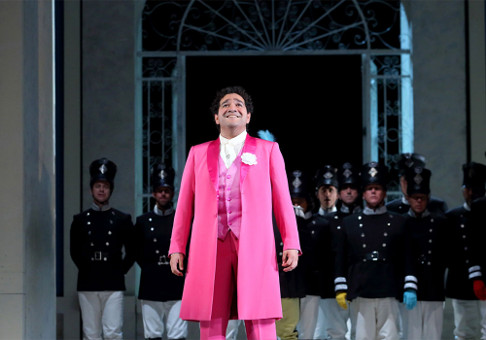 RenÈ Barbera as Count Almaviva
Saturday, February 28, 2015, was the first night for Los Angeles Opera’s revival of its 2009 presentation of The Barber of Seville, a production by Emilio Sagi, which comes originally from Teatro Real in Madrid in cooperation with Lisbon’s Teatro San Carlos. Sagi and onsite director, Trevor Ross, made comedy the focus of their production and provided myriad sight gags which kept the audience laughing.
Dancers and supers pulled LlorenÁ Corbella’s lightweight, light colored scenery around the stage as part of Nuria CastejÛn’s inventive choreography. Numerous dancers who served as townspeople and servants were part of every scene, which gave this Spanish production a particular Flamenco ambiance. As was true of the rest of the visual aspects of the show, Renata Schussheim’s costumes were black and white for all but the colorful finale in which Count Almaviva and Rosina wear bright pink for their departure in a magnificent hot air balloon.
Tenor RenÈ Barbera was a lighthearted Count who sang with the utmost in precise coloratura. Elizabeth DeShong is new to Los Angeles, but she has already sung major mezzo-soprano coloratura roles at Covent Garden, the Metropolitan and the Vienna State Operas. The possessor of a distinctive timbre, her waves of vocal color filled the hall with beauty. Baritone Rodion Pogossov, who was the Papageno in Los Angeles Opera’s 2013 presentation of The Magic Flute, was a robust Figaro who convinced the audience that his presence was irreplaceable. 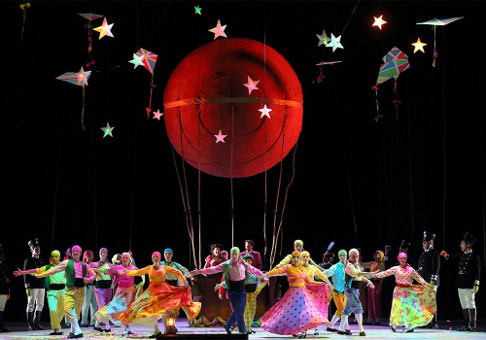 Finale: Elizabeth DeShong as Rosina, and RenÈ Barbera as Count Almaviva, are about to take off in the balloon
Alessandro Corbelli was a blustering Doctor Bartolo while Kristinn Sigmundsson was a conniving Don Basilio whose “La calunnia Ë un venticello” showed the dark toned resonance of his huge bass voice. Lucy Schaufer was a most amusing Berta, Jonathan Michie an energetic Fiorello, and Frederick Ballentine an enormously nervous sergeant. Chorus Director Grant Gershon’s men sang with alacrity and moved so well that it was hard to tell them from the dancers.
Tamara Sanikidze, who played the accompaniment for the recitatives on the fortepiano, shaped every phrase with taste. Conductor James Conlon mentioned in his pre performance lecture that the production of this Rossini opera he saw as a young boy influenced his decision to spend his life in music. On this evening he imbued the instrumental surfaces of the music with luminous subtleties while holding stage and pit together with bonds of pure musicality. Los Angeles Opera’s Barber of Seville was a treat for both eye and ear.
Maria Nockin