Director Peter Sellars first suggested the idea for the opera to Adams and eventually convinced him that the piece would be viable despite a lack of action. Alice Goodman then did considerable research into United States President Richard Nixon’s 1972 visit to China. Adams, interested in myths and their origins, thought that the opera could show the original history behind Nixon’s mythic visit. He and Sellars wanted a heroic baritone to play the role of Nixon. For this, his first opera, Adams’ usual minimalist music also shows the influence of Wagner and Stravinsky along with jazz and big band sounds. It’s a fascinating mix that we don’t always hear in his later works. 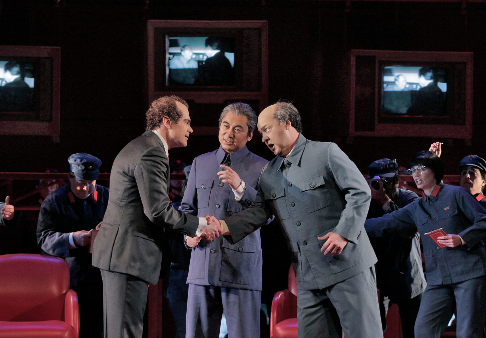 Franco Pomponi as Richard Nixon, Chen-ye Yuan as Chou En-Lai, and Chad Shelton as Mao Tse-Tung
San Diego Opera staged Nixon in China on March 17, 2015, in a production by James Robinson with interesting sets by Allen Moyer suggesting 1970s television. James Schuette added authentic costuming from the era. Adams has chosen to have the singing amplified in his operas so there was a sound designer, Brian Mohr. There was considerable ballet in this opera and choreographer Se·n Curran, along with principal dancers Julio Cantano-Yee and Khamla Somphanh, made it a most welcome and integral part of the show. Loved the dancers as whirling waiters at the banquet.
Franco Pomponi was a more than life sized Richard Nixon who sang his lines with the robust heroic sound Adams originally envisioned. Chen-ye Yuan was an officious Chou En-Lai and Chad Shelton was an elderly but still mentally capable Mao Tse-Tung. Sarah Castle, Buffy Baggott and Jennifer DeDominici comprised the trio of dissonant secretaries who always surrounded Mao. Although women had lesser roles in the actual visit, they had major parts in the opera. Kathleen Kim was a fabulous Madame Mao who sang one of the most difficult coloratura arias ever written as though it was an easy tune. With the simple costume of a Chinese working woman, she showed her artistry with filigrees of sound. As Pat Nixon, lustrous voiced Maria Kanyova was the girl next door who dearly loved the husband with whom she was swept up into history. Always a wonderful character actor, Patrick Carfizzi made Henry Kissinger as interesting and cantankerous as he was during the seventies. 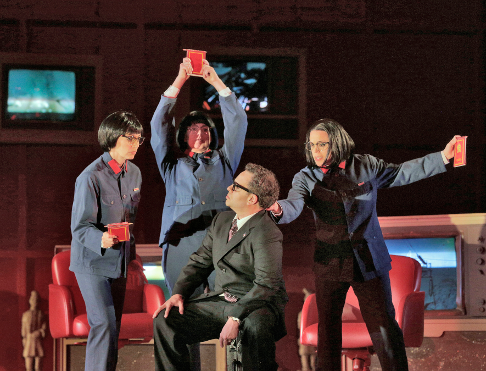 (L-R) Sarah Castle as the 1st Secretary to Mao, Buffy Baggott as the 2nd Secretary to Mao, Jennifer DeDominici as the 3rd Secretary to Mao, and Patrick Carfizzi as Henry Kissinger
Charles Prestinari’s San Diego Opera Chorus provided an excellent rhythmic and harmonic background for the historic scenes found in Adams’ mythic piece. It was the excellent work of conductor Joseph Mechavich that held stage and pit together and made this piece come alive for the San Diego audience. I hope the new San Diego Opera will give us more contemporary opera and allow us to see new pieces as they begin to enter the repertoire.
Maria Nockin