A co-production with
The Martha Graham Dance Company, the evening’s program was directed and
choreographed by Luca Veggetti. The narrative of The Tempest is so
deliberately surrealistic that I found the resistance of narrative in the
program engaging, rather than the reverse. To this Shakespeare aficionado, the
interpolations by Dryden sounded strange, but it was these interpolations that
much of the 1712 incidental music, attributed to Henry Purcell, was designed to
set. The Purcell and Kaija Saariaho‘s
2004 Tempest Songbook for soprano, baritone and period instrument
ensemble intertwined in fascinating ways. In this version, it was receiving its
world premiere, and I loved the textures of harpsichord, recorder, and archlute
(archlute!) in Saariaho’s unconventional harmonies. It was at Saariaho’s
suggestion that the two pieces appeared thus interwoven, and the dialogue
between them was musically rich and intellectually stimulating. 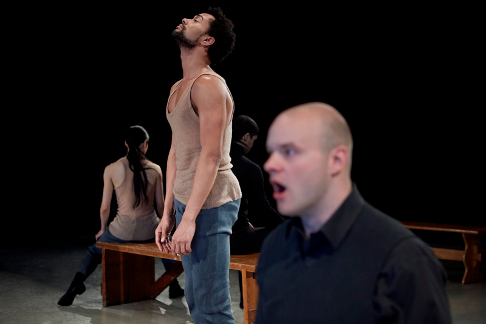 The creative set design was by Jean-Baptiste BarriËre. It seems almost a
misnomer to call it minimalist, so richly multivalent was the globe that hung
elegantly suspended by ropes reminiscent of the fated ship’s rigging. Light
projections onto it were skillfully used to evoke globes of the kind so beloved
at the courts of early modern Europe, with seas and continents shifting under
maps of the zodiac, charts of the stars. Images of the singers and dancers also
often appeared there, mirroring and amplifying the action on the stage. The
music of Purcell and Saariaho appeared in alternate sections throughout most of
the evening, with a suite of Saariaho’s songs in the second half of the
hour-long program, which was performed without intermission. From a fairly
straightforward presentation of the initial scenes of The Tempest,
with the panic and anger of the Bosun, and the terror and sorrow of Miranda,
the structure became increasingly impressionistic, with Saariaho’s music
allowing Ariel and Caliban (for instance) much more time than the source
material gives them.

Eight musicians of the Gotham Chamber Opera orchestra played with admirable
verve and versatility under the leadership of Neal Goren. Transitions between
the baroque and the contemporary never felt rough or forced. I enjoyed not only
the brio with which they handled the moods of the Purcell, from ceremonial to
cheerful, but the skill with which they explored the rich and varied textures
of the Saariaho. This was especially notable in the Bosun’s Lament, where the
orchestra musicians echoed the “Roaring, shrieking, howling” of the spirits
described by the increasingly desperate seaman. As we moved to Prospero’s
isle, the dancers began to take turns in center stage, sometimes mirroring the
movements of the singers, sometimes giving bodily expression (with skill that
took my breath away) to the emotions they voiced. In acting for Ariel and
Caliban, respectively, Peiju Chien-Pott and Abdiel Jacobsen gave performances
of extraordinary intensity. 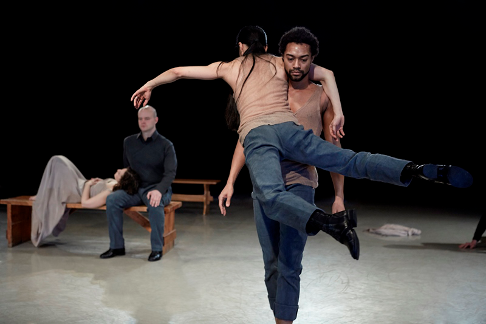 Soprano Jennifer Zetlan and
bass-baritone Thomas
Richards faced the challenges not only of singing music in two very
different styles, but of voicing a diverse array of characters: Prospero and
Miranda; Ariel and Caliban; the bosun and the god of the sea. Zetlan handled
the vocal lines and the emotional arc of Miranda’s Lament (Saariaho) well,
but it was as the sprite Ariel that she really shone, both in the magnificent
self-declaration (combining several of the speeches to Prospero) and the
exquisite “Full fathom five…”, which was the penultimate section of the
program. This was my first time hearing Thomas Richards, and I was very
favorably impressed both by his stage presence and by his full-voiced, plangent
singing. He sang both the Saariaho and the Purcell with great expressivity. My
Musicologist Roommate, who accompanied me, wanted more ornamentation, but
Richards made very fine use of vocal coloring. Saariaho’s setting of
Caliban’s Dream I thought especially lovely. In a traditional production of
Shakespeare’s play, the optimistic concluding ensemble (recording here) would seem strangely inopportune,
but here, it seemed only fitting. The program will be given two
more performances in this run, and could provide an interesting addition to
the repertoire of small companies.

This review first appeared at Opera Obsession. It is reprinted with permission of the author.