This is committed programming, but characteristic of a company
which in 2014 won an Outstanding Achievement in Opera Olivier Award for their
‘brave and challenging’ productions of Michael Tippett’s King Priam and Benjamin Britten’s Paul Bunyan that year.

The Siege of Calais was premiered at the Teatro San Carlo in Naples
in 1836, the forty-ninth of Donizetti’s operas to be performed during his
lifetime. After its initial run of thirty-six performances it was unheard until
Opera Rara’s acclaimed 1990 recording under David Parry, with Della Jones,
Nuccio Focile and Christian du Plessis in the leading roles.

Salvatore’s Cammarano’s libretto is unusual in that it is idealistic
heroism rather than passionate romance which is at the heart of the drama. The
opera presents an account of the 1346 Siege of Calais mainly from the
perspective of the city’s Mayor, Eustachio, and his son Aurelio. Eustachio
defies his besiegers, quells unrest among the French citizens, and uncovers and
overcomes a rebellion led by an English spy. Word arrives that the English King
will spare the town if six of its finest citizens are offered up for the
humiliation of a public execution. Donizetti was not fully satisfied with the
dramatic construction of his opera. There is also a third act, often omitted
even during the original run, in which the focus shifts to the English camp
where King Edward III entertains Isabella, his queen. (Presumably the
incorporated dances were intended to entertain French audiences.) In this
longer version, the English monarchs, though initially unrelenting, are
ultimately swayed by the honour and selflessness of the French victims and free
them, to general rejoicing.

Director James Conway follows the convention of omitting this final act
(although he assimilates some of the Act 3 music into the earlier scenes —
King Edward’s aria to rally the troops, for example). However, even without
this last-act switch from tragedy to celebration, Cammarano’s libretto
doesn’t quite come off. There is a basic tension — will the
burghers of Calais resist or submit to the pitiless English blockaders? Yet,
within this general narrative, the ups and downs flip repeatedly from melodrama
to anti-climax, with little forward movement. So, for example, we move from the
initial scene outside the city wall, to a powerful duet for Eustachio, the
Calais Mayor, and his daughter-in-law Eleonora, who despair the loss of Aurelio
whom they fear has selflessly sacrificed himself in an attempt to gain food for
his new-born son (his daring deeds are depicted by Conway during the overture).
But, their lamentations are unexpectedly interrupted by the jolly arrival of
Giovanni D’Aire with news that Aurelio has survived after all, a rapid change
of tone which makes their grief seem superfluous and excessive, and their joy
at Aurelio’s endurance somewhat trite.

The inadequacies of the drama are exacerbated by Conway’s very restrained
direction. The protagonists do little more than stand and deliver, and the
choreography of the choruses is particularly unanimated. Eustachio —
evidently suffering from a damaged ankle — sings several of his key
proclamations seated on an upturned bucket. The characters play ‘parcel the
parcel’ with the ‘baby’, rather indifferent to the grey bundle which they
unceremoniously pass between them. And, the suffering French burghers seem
occasionally to forget the severity of their injuries, throwing sticks and
supports aside to leap and gambol at moments of excitement and elation. A
bandage and bruise do not an invalid make.

Things are not helped by the fact that Donizetti’s score occasionally
reverts to ‘rum-ti-tum’ banality at moments of emotional catharsis. That
said, there are also places, particularly in the act-ending ensembles, where
the music does express powerful human feelings and psychological depth. And,
Samal Blak’s designs, though fairly minimal (just a broken sewage pipe and
some mangled hanging bundles) certainly convey the bleakness and misery of war.
Conway and Blak choose not to offer a realistic presentation of the historic
events of the Hundred Years War. Instead we have an unspecified time and place;
perhaps the siege of St Petersburg, or even more topical conflicts in Bosnia,
Serbia, former Soviet states and Syria, are suggested. The lighting design of
Mark Howard is effective too: particularly expressive was the gradual move from
the deep blue of midnight to the vibrant red of the dawn executions.

What makes this production come alive is the consistently strong singing of
the cast who are unswerving in their commitment to the score, and none more so
than baritone Craig Smith as Eustachio. His opening solo, a well-developed
recitative-arioso, had a Verdian intensity and Smith demonstrated stamina and
accuracy — and a lovely smooth lower register — throughout his honest
depiction of man wracked by personal love and public responsibility. Soprano
Paula Sides sang the rather undeveloped role of Eleonora, Aurelia’s wife,
with beautiful tone and shining vibrancy at the emotional climaxes. She
inspired genuine pathos, especially in her prayer over the sleeping Aurelio,
which opens Act 2. Her heartfelt invocation awoke the dreaming Aurelio,
triggering a sumptuous duet with the voices soaring and dipping in adjacent
thirds and sixths; this was plush and thrilling singing.

The trouser-role of Aurelio was magnificently performed by mezzo-soprano
Catherine Carby. She made an exceptional impact across a wide range, leaping
athletically between registers, and her low voice was stirring and firm, of
penetrating richness. Donizetti’s score is, for once, virtuosity-lite, but in
its more florid passages Carby used the flamboyant gestures to make a striking
dramatic impression: Aurelio’s account of his terrifying dream was especially
moving. Sincerity and passion were the touch-words here; and Carby blended as
effortlessly with Sides’ Eleonora in their Act 2 duet as she did with the
five French victims in the ensemble which ends the act.

As Edoardo, the English King, Grant Doyle demonstrated fine bel canto
characteristics, although Edmondo (a strong, bright Ronan Busfield) looked
somewhat disconcerted to find himself first dragged into a blithe dance by his
King, as the latter anticipates overcoming the obstacles to his glory, then
menacingly threatened with a sharp tweak of the ear.

Unusually, Donizetti’s emphasis is on the ensembles — which may have
accounted for the opera’s lack of popularity following the first Naples’
performances — and the whole cast and chorus obliged with invigorating
singing. In the minor roles Andrew Glover (Giovanni D’Aire), Matthew Stiff
(Pietro de Wisants), Matt R J Ward (Giacomo de Wisants), Jan Capi?ski
(Armando) and Peter Braithwaite (a Stranger) all acquitted themselves
admirably. The Octet at the close of Act 1 was superb; similarly moving was Act
2 close as the citizens fought for the honour to die to spare their fellow men.
The orchestral score is interesting and Jeremy Silver conducted with energy,
whipping the action along; if there was occasionally some waywardness in the
choral numbers it was quickly remedied. The overture was notable for some
lovely horn and woodwind solos.

Donizetti’s Il furioso all’isola di San Domingo, retitled by ETO as
the more ‘catchy’ The Wild Man of the West Indies, is even more of
a rarity. First heard in Rome in 1833, the opera has a libretto by Jacopo
Ferretti which is based upon an episode from Part 1 of Cervante’s Don
Quixote. The action centres on the mad ravings of a Spanish gentleman,
Cardenio, who has sought refuge on a Caribbean island following his wife’s
infidelities with own brother, Fernando. The plantation manager, Bartolomeo,
orders Cardenio to be detained but Marcello, Bartolomeo’s daughter, urges her
father to show compassion. A monstrous storm wrecks a ship and washes up both
Eleonora, the unfaithful wife, and Fernando; both are seeking forgiveness and
reconciliation. 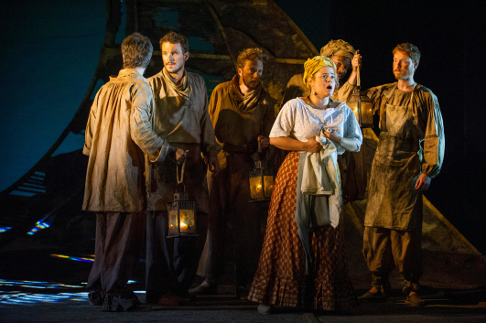 Act 1 is promising and establishes a compelling dramatic direction, but the
second act does little but eke out a prolonged reunion, offering copious
backstory, a ludicrous suicide attempt, a momentary blindness, and some
unconvincing volte-face. The result is that the characters largely
fail to engage our sympathy: moreover, Ferdinand, Bartolomeo and the latter’s
slave, Kaidam‡, have little to do in Act 2 exacerbating the dramatic
imbalance. Again, high seriousness and comedy sit rather uncomfortably side by
side. Donizetti had completed L’elisir d’amore in the previous
year and there are several suggestions of recycling in this score, not least in
Eleonora’s final cavatina and cabaletta ‘ Che dalla gioia’ (What
extreme happiness) which, as the joy bursts from the heart of the pardoned
wife, has more than a touch of Adina about it.

FlorenÁe de MarÈ’s set is beguiling, though. A huge curve — arching
wood encrusted with shimmering greens and blues — evokes both Hokusai’s
‘Great Wave off Kanagawa’ and a ship’s bow; enclosing a trapdoor through
which madman and slave can surface and be banished, after the storm it becomes
a visual emblem of the damage done by the sea tempest. Chained buoys suggest
the quayside setting and remind us of other chains and enslavements. All is
beautifully lit by Mark Howland: glowing emeralds and aquamarines evoke the
rainbow glints of sun on sea, while the moonlit scenes are etiolated and eerie.
The cirrus clouds beyond metamorphose magically from calm sky-blue wisps to
blood-red inflected sweeps.

As the Wild Man, Craig Smith once again put in a sterling performance:
aggrieved and wronged, he prowled and lurched around the isle, while retaining
a core of noble dignity. If Smith lacked a little stamina in the second act,
this was understandable given his efforts of the previous evening. His madman
is part-Prospero, without Shakespeare’s magic, part-Robinson Crusoe, without
his Man Friday. As Kaidam‡, Barotolomeo’s slave, Peter Braithwaite does a
good job of suggesting the latter though. Braithwaite impressed with his alert
acting as the ‘English spy’ in The Siege of Calais, and here he
married an appreciation of the slave’s essential worthiness with an
appropriate dash of comic levity. He also articulated the Italian text well
too, among two casts where serviceable pronunciation was more common.

Sally Silver sang with lustrous tone as Eleonora, negotiating the runs
fluently, although she was occasionally a little constrained at the very top.
She and Smith have to carry the dramatic and emotional burdens of Act 2, and
Silver acted convincingly. Once an overly rapid vibrato had settled down, tenor
Nicholas Sharratt was a confident Fernando with forceful projection: he hit the
high notes too, but the tightness and thin tone suggested that he was pushing
quite a way beyond his comfort zone. Njabulo Madlala had considerable poise as
Bartolomeo, and mezzo-soprano Emma Watkinson (standing in for the indisposed
Donna Bateman) sparkled as Marcella.

The chorus were once again in fine voice, but there was some silly prancing
around at the start of Act 2 which made a rather jarring preface to the grand
reconciliation scene. Jeremy Silver led another sure performance in the pit.

In what seems almost an ‘apologia’ in the programme booklet, Conway
argues for the opera’s affinity with Shakespeare’s The Winter’s
Tale and Cymbeline, while Khan — in discussion with Aidan
McQuade, Director of Anti-Slavery International — suggests that slavery is,
if indirectly, the driving force of the plot. But, Donizetti was no William
Wilberforce. More convincing is Conway’s explanation that the repertoire
presented on this tour was selected because the operas were works which ETO
could ‘have a good chance of doing well, and which might move people who are
open to feeling and thinking’. On the basis of the musical successes evident
in these two performances, which show us that there is more to Donizetti that
we might imagine, I’d agree with that.