Add to that Romani’s
profusion of mad-cap motion and Rossini’s tuneful, if largely indistinctive,
musical fun and what’s not to like?

So, why did I find myself yawning rather than guffawing during this first
night of the run? Things certainly unfolded efficiently enough, from
Fenouillat’s sliding flats to Alessandro Corbelli’s wry patter. Yet, some
of the paint’s brilliance has faded and Corbelli, while still the master
buffo caricato, was not always focused of voice and at times seemed to
be going through the theatrical motions. The ensemble was good and the farce
fluent: three of the cast — Corbelli, Thomas Allen and Ildebrando
D’Arcangelo have sung in every performance of this production, while Barry
Banks was the original Don Narciso and Aleksandra Kurzak sang Fiorilli for the
first revival in 2010, so one would expect the slapstick to be slick.
Indeed, Don Geronio (Corbelli) and Selim (D’Arcangelo) conclude
their tussle by trapping a waiter between two chairs with the grace and
precision of Royal Ballet principals (Movement Director, Leah Hausman).

Conductor Evelino PidÚ draw some charming playing from the ROH orchestra
and created a good balance between stage and pit. There was strong singing too
from the ROH chorus: the women were a sharp band of pick-pockets and the men
looked glitzy in their blue wigs and ball-gowns. But, despite the incessant
on-stage commotion, it all felt rather perfunctory and dramatically sluggish.
There was plenty of laughter around me but, unfathomably, that seemed to be
prompted by the unembellished surtitles rather than anything happening on
stage. 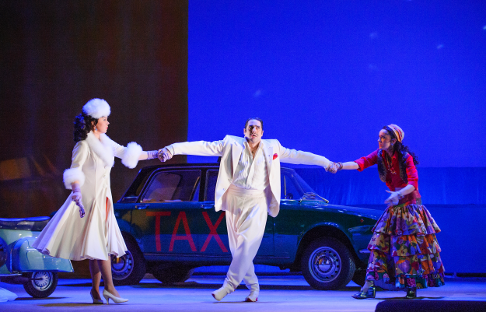 Aleksandra Kurzak as Fiorilla, Ildebrando D’Arcangelo as Selim, and Rachel Kelly as Zaida

The 1950s and 60s have been fertile decades of late for opera directors
seeking a piquant period-update. And, it seems appropriate for Caurier and
Leiser to recreate an era which saw a revival of interest in Il Turco,
starting with Maria Callas’s 1950 performance in Rome at the Teatro
Eliseo and the 1955 La Scala production of the opera, which had been absent
from that house’s stage for 130 years.

The directors give us every clichÈ in the book, from Narciso’s greased
Elvis-quiff to a superfluity of vintage vehicles: one scene assembles a taxi, a
Fiat 500 and a Vespa. This is a simple, carefree world where everyone
is rich and happy, and the sun always shines. No wonder that the arrival of a
Turk — atop the prow of his luxury yacht — creates such excitement amongst
these urbane Italians. If one were tempted to detect a touch of xenophobia in
Romani’s libretto, Caurier and Leiser certainly don’t cast even the
slightest glance in the direction of UKIP.

It’s probably not the directors’ fault if things feel rather
insubstantial — the text and score are frivolous froth. But, during
the evening’s longeurs — particularly in Act 2 — I found myself
musing on tangential matters. Last year, an exhibition at the Estorick
Collection in London presented photographs of the era of Italy’s ‘economic
miracle’; of Brigitte Bardot indolently sipping champagne, and Richard Burton
and Elizabeth Taylor idling on the deck of their yacht. But, Fellini’s film,
which is repeatedly referenced in the programme, was not a celebration of a
hedonistic golden age, rather a critique of it: the title is highly ironic.
And, the parallels with post-Berlusconi Italy are not particularly heartening.
Those living in the Roma camps of southern Italy face bitter discrimination; a
few years ago, the Guardian reported that photographs had emerged of
a beach in Naples where two young Roma gypsy girls had drowned, while just feet
away from them a carefree couple enjoy a leisurely picnic.

If I’m straying from the point, it’s because I spent much of the evening
struggling to find the ‘point’ of this production; but this was undoubtedly
futile, for there isn’t one … and, indeed, why should there be more to
Rossini’s opera than harmless fun under an azure sky? Those around me
evidently enjoyed themselves. 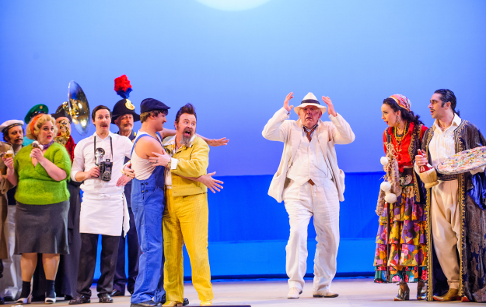 One of Rossini’s earliest comic farces, Il Turco in Italia was
first performed in 1814 at La Scala. The score is busy and bustling, but
largely unmemorable; Rossini makes little attempt to use his music to
characterise and it often feels oddly disconnected from the text. But, then,
the ‘text’ is ‘made up’ as it goes along … for the Poet, Prosdocimo,
struggling in the mires of writer’s block, has arrived at a gypsy encampment
hoping to find inspiration for his new opera libretto among the everyday
happenings of the common folk. As so, our opera unfolds before us … except
that the common folk prove more unpredictable that the Poet anticipated and
re-write the scenes that he has penned for them. The result is an intrigue that
would be a serious contender for the ‘most confusing plot in opera’ prize.

But, here goes … we are in Naples. A Turkish prince, Pasha Selim, wanders
into a beach-side gypsy camping ground, irritated because his favourite amour
has escaped from the harem and confused because he finds that on this foreign
soil he cannot simply buy himself another wife if he wants one. But, things
soon look up: Fiorilla — the flighty, flirtatious wife of put-upon Don
Geronio — is happy to take Selim’s mind off his troubles … if she can
squeeze him in between assignations with her lover Narciso. Prosdocimo is
relieved to find the elusive plot for his new opera buffa
among these tangles of romantic philandering and marital suffering. The action
occasionally veers in tragic directions, but the Poet successfully engineers a
happy ending. At the close repentance is sworn, forgiveness is dispensed, and
the various couples are reunited, leaving a lonesome Narciso to nurse his
wounded pride and heart.

As the abused Geronio, Corbelli once again showed us how buffo
should blend buffoonery and pathos, whether tangling with the fronds of a palm
tree or fighting strands of spaghetti. This was a theatrical masterclass even
if at times Corbelli’s singing was rather unfocussed, particularly in the
more florid passages. The influence of CosÏ fan tutte on Rossini’s
opera can be strongly felt (Mozart’s opera had been staged at La Scala
shortly before Il Turco was premiered) and as the stylishly
white-suited Prosdocimo, Thomas Allen essentially reprised his inimitable Don
Alfonso, confidently manipulating the action with suavity and wit. There
isn’t much of a voice left, but Allen can still effortlessly command the
stage.

Barry Banks, attired in garish yellow denim and sporting an unattractive
beard, sounded a bit strained in Narciso’s show-piece aria but established a
good rapport with Corbelli, the two rivals brought together by Fiorilla’s
perfidies. Polish soprano Aleksandra Kurzakreturned to the role of
Fiorilla and perted, pouted and strutted with aplomb. She showed vocal
athleticism, although some of the coloratura was ragged at the top, and I
didn’t always find her tone attractive — it was rather too ‘edgy’ when
in the stratosphere and Kurzak didn’t capture the vulnerability with should
show through Fiorilla’s narcissism in her soul-searching aria of repentance,
‘Squallida veste, e bruna d’affanno e pentimento’, as she reflects on her
love for the three men and her anguish at being torn between them. There was
more warmth, however, in her final reconciliation duet with Geronio.

There were no doubts about Ildebrando d’Arcangelo, though; he was as
sumptuous of voice as he was alluring of appearance. His bass was velvety and
dark, wonderfully conveying the exoticism of the strange and foreign.
D’Arcangelo’s virtuosic arias were technically precise but also full of
colour and character, and his duets with Corbelli and Fiorilla were the
highlights of the evening.

Two Jette Parker Young Artists were given their chance to shine. As Zaida,
Irish mezzo-soprano Rachel Kelly impressed, competing feistily with Fiorilla
for Selim’s attention and affection. When I heard Kelly last year, in the
role of Mirinda in the ROH’s production of L’Ormindo at the Globe
Theatre, I remarked the ‘rich sensuality’ of her voice, and this glowing
warmth was much in evidence again. Portuguese tenor Luis Gomes had little to do
as Albazar but acquitted himself well.

This was a good ensemble performance. If you like a dash of Pirandello
spiced with Goldoni, then you’ll enjoy.

Apollo of the Arts: Lost Lamentations – a concert for connoisseurs at Winchester College Chapel