Performers in the Passion were Nicholas Phan as the Evangelist, Stephen Morscheck as Jesus, and remaining roles sung by soprano Lisette Oropesa, countertenor Lawrence Zazzo, tenor John Tessier, and bass-baritone Matthew Brook. The Chicago Bach Choir was prepared and led by Donald Nally, John Nelson conducted the Chicago Bach Orchestra. Preceding the Passion was a performance by the Chicago Bach Choir of James Macmillan’s Alpha and Omega [2011], thereby initiating a tradition of “opening each Chicago Bach Project program with a work commissioned by Soli Deo Gloria.” For the present work Macmillan draws on motifs and text from the Book of Revelation, making it an especially appropriate companion piece to the St. John Passion. Under Nally’s direction the music alternately swelled and grew softer in waves of choral involvement. After a pronounced effect on “And the sea,” the women first, followed by the men, sang with increasingly measured embellishment. The tension thus established concluded with a final summary declaration of “I am the Alpha and Omega.” 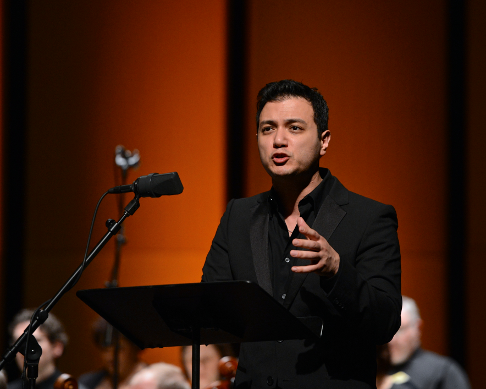 The work by Macmillan served as a prelude to the main part of the program, the St. John Passion. The first two divisions of the Passion cover New Testament scenes detailing the betrayal of Christ up through the point of Peter’s denial. From the start Nelson brought out noticeably involved playing by the lower strings. The introductory choral number, “Herr, unser Herrscher, dessen Ruhm” (“Lord, our Ruler, whose praise”), sets the tone through its repetition and variation of an invitation to reflect on the sufferings of Christ as an ultimate path to glorification. The emphasis here on the last verbal element of the unit “verherrlicht worden bist” ([you] “have been glorified”) functioned as an emphatic signal in the chorus’s presentation of these lines. The balance of the first section culminating in the arrest of Christ is carried by the Evangelist’s narration and the words spoken by Jesus, both punctuated by choral outbursts signifying the soldiers or by participation in the prayer-like chorale passages. As the Evangelist Mr. Phan used his tenor voice to produce individualized, emphatic declamation. In this first section he pursued an expected narrative tone with occasional variation, such as the high pitch on “Hohenpriester” (“Highpriest”) and an elaborated rendering of “Waffen” (“weapons”), to describe the threat of Judas before the garden. Mr. Morscheck’s focused, staid responses in the role of Christ (“Wen suchet ihr?” … “Ich bin’s” [“Whom do you seek?” … “I am he”)] have the opposite aural effect yet provide equivalent characterization with sober delivery. As the drama intensifies, Phan’s frenetically appropriate decoration on “abermal” (“once again”) is followed by a full-voiced “Sie aber sprachen” (“They said again”). At times Phan’s embellishment does not suit the text directly, as in the rendition of “Ich habe der keine verloren, die du mir gegeben hast” (“I have not lost one of those, whom you have given to me”), a line which could profit from less ornate delivery. Morscheck’s subsequent command as Christ to Peter, “Stecke dein Schwert in die Scheide!” (“Put your sword in its sheath!”) concluded, after an arresting bass note on “Scheide,” with unwavering, extended emphasis on “mein Vater mir gegeben hat” (“that my Father has given me”), indicating divine will in the whole. At the close of this section of the Passion Mr. Zazzo sang the alto aria “Von den Stricken meiner S¸nden” (“From the bonds of my sins”) with carefully wrought embellishment on significant parts of the text highlighting the sacrifice of Christ and its theological understanding. Zazzo’s intonation on “Stricken” and the accompanying decoration on “meiner,” enhanced in the repeat, identifies the responsibility of the individual sinner whose fetters must be released. His subsequent melisma on “allen Lasterbeulen” (“all the boils of vice”) effectively vivifies the ugliness of sin to be cured by Christ’s sacrifice.

In the second segment of the Passion the remaining singers are introduced in both sung and declaimed parts. The focus remains Peter’s denial in fulfillment of Christ’s prophecy. As such, the spoken exchanges between the Evangelist, Peter, Jesus, and a servant dramatize Peter’s actions while solo arias at either end of the segment reflect on the merit of devotion and the remorse of denial. Mr. Brook’s brief lines as Peter, “Ich bin’s nicht” (“I am not so”), were uttered with force sufficient to prompt the Evangelist’s report that the disciple “weinete bitterlich” (“wept bitterly”) with Phan’s manifold decorations on the repeat of “bitterlich.” The arias sung at the start and close of this part introduce the soprano and tenor voices. Ms. Oropesa’s introductory piece, “Ich folge dir gleichfalls mit freudigen Schritten” (“I shall follow you likewise with joyful steps”), was sung with a nice sense of melodic evenness, emphasizing especially the central line, “mein Leben, mein Licht” (“my life, my light”). Her voice blended well with the double flute accompaniment. After the denial of Peter, Mr. Tessier’s aria, “Ach, mein Sinn” (“O, my senses”), depicts the apostle plagued by self-recrimination, sung here with heartfelt top notes and subtle decoration performed on “die Schmerzen meiner Missetat” (“the agonies of my misdeed”).

The remaining scenes of the St. John Passion, performed after a brief intermission, begin with the interrogation before Pilate and proceed through the condemnation and crucifixion, death, and burial of Christ. As in the first parts of the Passion, the Chorus has an integral role in both informing through narrative summary and assuring stability in its commentary. The chorale, “Christus, der uns selig macht” (“Christ, who makes us blessed”) at the start of the next section, was performed here with precisely such goals. In a sober delivery of the accusations against Christ as well as their functions, the Chorus related its information and comment in arching lines bearing neither decoration nor repeat. By contrast, when the Chorus declaimed as the mob opposing Christ, a sense of drama sprang from individual bands of voices throughout the group. Between these parts the soloists extended their previous involvement. When speaking of the fulfillment of Christ’s words, Phan’s Evangelist heightened the expected tension with a broad melisma on “welches Todes er sterben w¸rde” (“the manner in which he would die”). Brook intoned the words of Pilate with authority and with the detachment of a ruler who refuses to assume guilt in yielding to the mob. In his aria “Betrachte, meine Seel” (“Consider, my soul”), communicated from the standpoint of an observer, Brook’s voice encouraged the individual soul to perceive the good bound up with this suffering. His graceful sense of line flowed over the theological concept of “aus Dornen … Himmelsschl¸sselblumen” (“primroses blooming from a crown of thorns”), uniting the verses in anguished imagery. As a conclusion to the interrogation and flagellation before Pilate, Mr. Tessier performed “Erw‰ge” (“Consider”) accompanied by two solo violins. This piece was one of the most memorable scenes of the evening, as Tessier commenced with high pitches and variation on the title word of the aria. In his equation of Christ’s wounded back with the sky and its rainbow after the deluge of human sin Tessier placed a bridge of trilled decoration on the comparison “gleiche.” His enunciation of the waves in “Wasserwogen” (“floodwaves”) captured the undulating movement of water, just as “Der allerschˆnste Regenbogen” (“the most exceedingly beautiful rainbow”) was sung to evoke the theological beauty of God’s grace.

As the dramatic scenes of the condemnation and crucifixion approach, Phan’s projected volume emphasized the insistence of the soldiers’ and the priests’ demands. The subsequent arias for bass at the point of the crucifixion and the following death of Christ were especially moving and well executed. In “Eilt, ihr angefochtnen Seelen” (“Hasten, you tormented souls”) Brook’s singing on this opening line mimicked the rapid movements of those called to witness. Later in the same aria his embellishments on the alliterative “Fl¸gel” and “flieht” (“wings” / “fly”) enhanced this quickened pace even further. In his final aria, “Mein teurer Heiland” (“My precious Savior”), sung after Phan’s softly announced “und verschied” (“and he died”), Brook declared that the world has now been made free. The constant questioning of those who would know, “Ist aller Welt Erlˆsung da?” (“Is the redemption of the world here?”) was enhanced by Brook’s rendering of this and similar lines with distinct, rising intonation. Most telling was the lingering emphasis on the oppositional line “Und sprichst stillschweigend” (“And you speak while yet maintaining silence”). This verse, addressed to Christ’s bowed head, highlighted the very mysteries and prophecies on which the Passion draws.

The choral passages performed in the final scenes revert to the stability of the opening parts of the text. Yet now rather than narrative progression the choral focus is one of prayer and entreaty to appreciate the sacrifice. The respectful moderation maintained by the Chicago Bach Choir through to the final call to praise God “ewiglich” (“in eternity”) was a fitting close to this year’s Lenten performance of Bach’s St. John Passion.