Commissioned by Glyndebourne Opera and premiered in September 1998 by
Glyndebourne Touring Opera, Richard Jones’ original production of Flight
was subsequently staged twice in the main house, in 1999 and 2005. The
opera was televised by Channel 4 in 1999, and there have since been more than
80 productions across Europe and in the US. The critical response has been
near-universally euphoric.

Flight is a rarity in more ways than one. Modern-day operatic
comedies are few and far between, and there can’t be many new comic operas
that have received such universal acclaim since the days of Rossini and
Donizetti. Moreover, how many operas are there set in an airport lounge or
which feature on-stage childbirth? Yet, airports are places of transit through
which pass representatives of all walks of life and in which relationships
develop and unravel, and the libretto, by British playwright April de Angelis,
presents an ensemble cast of 10 which serves as a microcosm of the human
condition.

Glyndebourne’s General Director, Anthony Whitworth-Jones, wondered when
commissioning the work whether Dove could create ‘A Marriage of
Figaro for the 1990s’. Flight certainly shares
Figaro’s integration of the serious and the comic. While there is
much to raise a belly laugh, the Refugee’s own narrative is profoundly
moving, his ‘imprisonment’ poignantly juxtaposed with the freedom of those
inside the aircraft which we see take off, his life ‘on pause’ while those
around him quite literally move forward.

Dove’s score is eclectic: by turns extravagantly ‘Romantic’ and
restrictively ‘minimalist’, one can detect echoes from Shostakovich to
Britten (not least in the word setting) to Sondheim.

Funny yet provocative, topical but also indebted to the past, Flight
has become one of the most popular and oft-performed British operas of
recent decades. As Fiona Maddocks, writing in the Observer commented:
‘One reason Jonathan Dove’s Flight was such a triumph at
Glyndebourne is that he understands the marriage of theatre and music. He knows
how to rouse passions and raise smiles. Tunes flow in abundance, and for him,
creating a mood, capturing a feeling for an instant, are second nature.’

Click
here for an exclusive interview with Jonathan Dove . 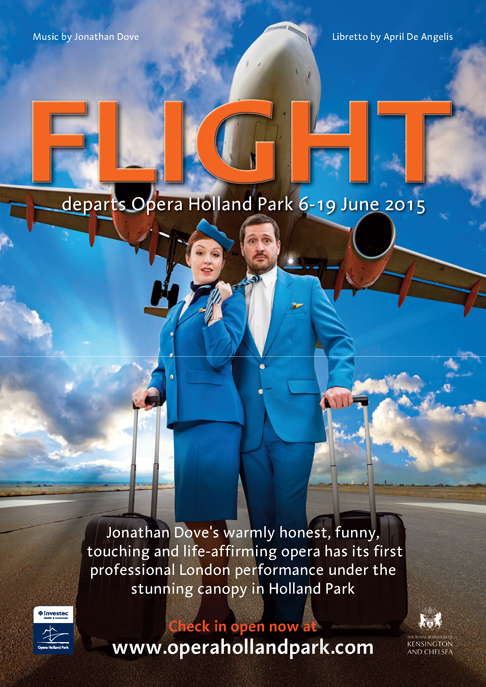