Richard Strauss’s opera, Ariadne auf Naxos, is always a bit complicated. On May 14, 2015, Pacific Opera Project portrayed the opera’s setting as the actual opening of the Ebell Club in Highland Park, CA, in 1913. There were two contenders for the opening night’s entertainment: a newly commissioned opera, Ariadne auf Naxos, by an important new composer, and a very popular vaudeville show starring the well known entertainer, Zerbinetta. H.H. Meyer, husband of one of the club members, suggested having both shows run simultaneously. Members passed his motion so that all the indoor entertainment could conclude by 10:30 PM when technicians would set off a display of fireworks.
Pacific Opera Project, a small Los Angeles company, presented the production of the Strauss opera with an excellent group of young singers at the beginning of what should be good careers. Although the setting was 1913, the Ebell Club audience heard the 1916 edition of the opera rather than the far more difficult original version. The auditorium was set up so that the audience of two hundred sat at tables with refreshments while they watched the opera. 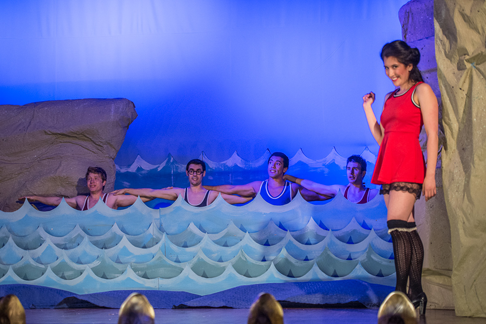 Sara Duchovnay as Zerbinetta with her troupe
The main character in the first act was The Composer. Played by Claire Shackleton, she moved extremely well and had exemplary diction but her voice tended to be unsteady on longer notes. Dialoguing with her, Music Teacher Ryan Thorn sang with burnished bronze tones. After the intermission he and Timothy Campbell sang an amusing version of Cole Porter’s Brush Up Your Shakespeare to advertise the company’s next production: Falstaff.
Tracy Cox, the Ariadne, had a huge dramatic voice that seemed ready for a much larger space. Her sound was opulent and her top notes radiant. She did not have a great deal to sing in the first act but her glorious Act II aria, Es gibt ein Reich, was definitely worth waiting for. Her accompanying trio consisted of Maria Elena Altany, Kelci Hahn, and Sarah Beaty. Altany, the Susanna in Los Angeles Opera’s Figaro 90210, sang Naiad with honeyed tones. Hahn was an attractive Echo, and Beaty handled the low notes gracefully as Dryad. Dramatic tenor Brendan Sliger sang Bacchus, the god of wine and lover of Princess Ariadne. With powerful resonant tones and firm stagecraft, he took her from dark lamentation over the loss of Theseus into the light of new love and an eternal place in the heavens. 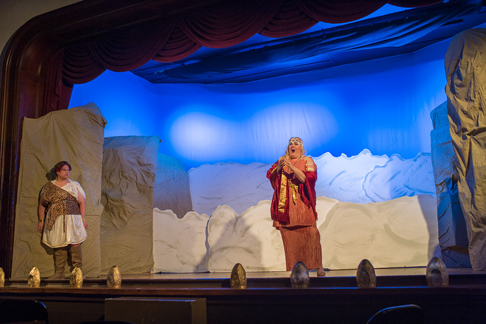 Brendan Sliger as Bacchus and Tracy Cox as Ariadne
Sara Duchovnay sang Zerbinetta, the leading lady of the vaudeville company who finds herself onstage at the same time as the operatic tragedy. Duchovnay is a charismatic stage creature. Although she does not have a trill and she tossed some of the coloratura runs off rather lightly, she was a fascinating Zerbinetta. When she was onstage all eyes were upon her. Her troupe included Nicholas LaGesse as Harlequin, Jon Lee Keenan as Scaramuccio, Robert Norman as Brighella and Keith Colclough as Truffaldino. All were capable vaudevillians with the most interesting voices coming from Norman and LaGesse.
This production did not need a full sized orchestra because of the size of the hall. Christopher Fechteau’s reduction of each group to a single instrument was adequate accompaniment. Conductor Stephen Karr led his players in smart, brisk tempi while giving the singers enough leeway to create believable characters and bring out emotional expression. This production of Ariadne auf Naxos introduced an interesting young company and allowed the Los Angeles audience to hear some fine new singers.
Maria Nockin