Concert performances are nothing new at the Royal Opera House. Pappano’s been doing them for years. In his capacity as Music Director at the Accdemica Nazionale di Santa Cecilia, he conducts orchestral repertoire most of the time. So it makes total sense that the Royal Opera (and Royal Ballet) should inaugurate a new series of concert performances to showcase their orchestra.
Even more significantly, though, the experience of opera, or ballet, is much enhanced by an understanding of the musical background and context.
Orchestral concerts can be a richly rewarding extension of the opera and ballet experience. People go out for many different reasons, and combinations thereof. Some go for megastar singers, or dancers, or for colourful costumes (whatever the actual nature of the work being performed. Some may even go for the pleasure of being outraged Before this concert, Pappano specifically mentioned Karol Szymanowski KrÛl Roger, the sensation of the season. The opera is so unusual that it’s more productive to approach it, not as a stand-alone opera, but through the perspective of the composer’s music as a whole. Its themes run throughout Szymanowski’s output. It’s very closely related to his “The Song of the Night”, Szymanowski’s Third Symphony in particular. No Szymanowski song symphonies or orchestral songs this time, though, but works by Ravel, Chausson and Skryabin, his contemporaries and influences.
Opera orchestras, unlike symphony orchestras, play the same piece repeatedly through a run, and don’t usually venture far from the basic canon, so it must be refreshing to tackle new repertoire. Yet their experience with drama and dance give them an edge. As soon as they launched into Maurice Ravel’s “Une barque sur l’ocÈan”, from Miroirs, we could hear the surge of giant waves, as vividly played ass if the music were illustrating some grand piece of theatre. The piece was originally written for solo piano, but orchestrated by Ravel himself. One could almost see the ocean swell, and imagine the tidal surge animating the waters. In the imagination, one could envisage the barque sailing towards unknown adventures. ShÈhÈrazade immediately came to mind, an “opera” without words or voices, telling a glorious, dramatic story. “Alborada del gracioso”, also based on Miroirs revealed another mood. A guitarist, possibly Spanish, is playing.. Exuberant pizzicato suggest the plucking of strings, and the fast moving feet of dancers. The ROH orchestra is, of course a “dance band” as Pappano has said. Instinctively, they understand the relationship between music and physical movement. 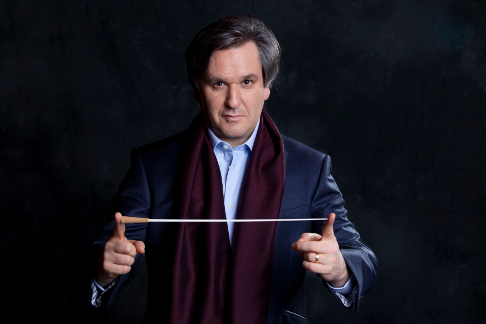 Anna Caterina Antonacci brought diva glamour to Ernest Chausson’s PoËme de l’amour et de la mer. Yet again, the orchestra’s flair for dramatic colour revealed itself. Although Antonnaci is a star, and sang expressively, this time, I, at least, was paying attention to the interplay between instruments, the abstract “voices” over which the solo voice wafts. Again, we heard the surge of the seas, reflecting the passion of the love song, The orchestra describes meaning so vividly that the meaning oif the text is amplified without obscuring the main vocal line.
Perhaps Pappano wanted to inject a bit of comic relief between the florid intensity of Chausson and Skyriabin. Hence Leonard Bernstein’s Fancy Free. There’s a Royal Ballet connection, since the piece was conducted by Bernstein himself at Covent Garden in 1946. It’s a chance for the orchestra to demonstrate different styles , eg jazz, big band music and so on, with some lively parts for solo players to “dance”, as dancers might, in front of the ensemble. It’s clever and cheerful the occasion, but one wonders if West Side Story, which I love, might be the closest Bernstein got to the emotional depths of opera.
And thus to Alexander Skryabin’s Le PoËme de l’extase, with which the concert reached its heady climax. Wave after wave of extravagant, impressionistic chromaticism : perhaps such ecstasy is too extreme to be confined within the parameters of text. In many ways, this, too is a song symphony though the singers are invisible, sublimated into instrumentation. Skryabin simply supplies titles : “His Soul, in an orgy of love” and “The realization of a fantastic dream”.. The listener interprets meaning through imagination. A hundred years after its premiere, Le PoËme de l’extase, is still so shockingly avant garde that the concept of words abstracted into music still unsettles some.The Szymanowski connection is very strong indeed. King Roger dreams, tantalized by fantasies of sensual discovery. ends with a cataclysmic blast of aural light,. Has King Roger found apotheosis Has he, too, discovered that his god is as beautiful as himself ? Skryabin’s Le PoËme de l’extase, also ends in a blaze of dazzling light, so powerful that I had to cover my ears so as not to be overwhelmed. The opera and tone poem are very different but very much connected. Skryabin’s title for his third movement is “The glory of his own art”, a Nietzschean triumph of will, perhaps, or a statement of faith in the transformative power of art. Entirely in tune with the values of KrÛl Roger.
Anne Ozorio