Before and after the performance there were numerous groups of Mariachi musicians, playing on the plaza while vendors offered Mexican food to the listeners. Whenever Mariachi opera comes to San Diego the whole town seems to turn out to celebrate.
The new opera is based on some of the same themes that graced Cruzar la Cara de la Luna (To Cross the Face of the Moon), which we saw last year. The text underscored the importance of family and blood relationships in Mexican culture. The opera was performed without intermission in Spanish and much of its story was not written in the program. That would not have been a problem had the supertitles worked for even a part of the show, but they never appeared and English speakers were left to their own translation of the words as they enjoyed the beautifully rendered music. 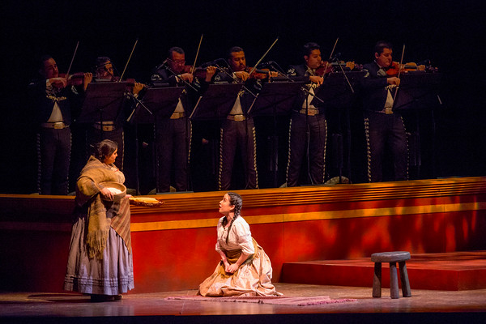 Vanessa Alonzo as Juana and Abigail Santos Villalobos as Amorita
The story begins at a Morelos, Mexico, hacienda in 1910. When the owner’s son, Luis, returns home from school abroad, he falls in love with a beautiful indigenous Mexican girl named Amorita whose family lives and works on the estate, so their relationship has to be kept secret. Set against the background of the Mexican revolution, the lovers’ passion influences the destinies of their families for generations to come.
Puerto Rican soprano Abigail Santos Villalobos sang the leading role of eighteen-year-old Amorita with resonant, honey-sweet tones that told of her emotional involvement with her lover. Tenor Daniel Montenegro, like Santos Villalobos a product of San Francisco Opera’s Merola Program, sang the part of her lover, Luis, with sonorous, robust sounds that established his character as the esteemed family heir. One of the most striking characters in the story was the mysterious elderly Mexican man Xihuitl, played by Octavio Moreno who used his character to show the ongoing influence of centuries of indigenous Mexican culture. 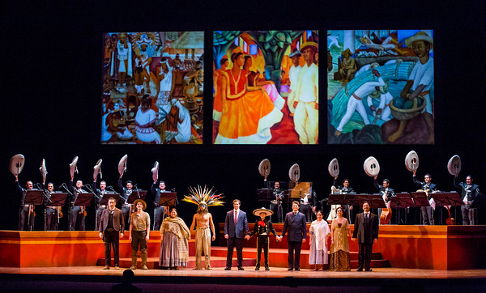 Cast of El Pasado Nunca se Termina in San Diego
Vanessa Alonzo, whom we remember from Cruzar la Cara de la Luna, was a warm-voiced Juana while Ricardo Rivera delivered his text with alacrity as Amorita’s brother, Acal·n. As Hacienda owner Augustino, whose ancestry is purely Spanish, well known operatic baritone Luis Ledesma sang with brooding elegance. Mezzo-soprano Cassandra ZoÈ Velasco, a recent graduate of the Domingo-Colburn-Stein Young Artist Program at Los Angeles Opera, captured the style and essence of his French-born trophy wife, Isabel. Paul La Rosa created an interesting character as Enrique, the Mexican-American Congressman, while young Sebastien De La Cruz, a 2012 semifinalist on NBC’s America’s Got Talent, made an auspicious debut as the Congressman’s son, Daniel.
Scott Marr’s costumes were always beautiful and appropriate. Elaine McCarthy’s projections set each scene so that the audience knew where the action was taking place. The violins, trumpets, harp, vihuela, guitar, and guitarron of the Mariachi Vargas Company were all on stage. Audience members could watch the instrumentalists play while other artists regaled onlookers with song and acted out their parts. It was a joy to have the orchestra on stage for a change. This Mariachi work will be seen at Arizona Opera as part of their 2015-2016 season and it will be interesting to see it for a second time.
Maria Nockin