But the Slovak National Theatre (SND),
based in Bratislava, has as its Music Director and Opera Director the Austrian
conductor Friedrich Haider who
has spent the last 12 years exploring, conducting and recording
Wolf-Ferrari’s music, and the opera company there has the sort of large
permanent ensemble which is necessary to bring off I gioielli della
Madonna, an opera with around two dozen named roles.

I was in Bratislava to attend the premiere of SND’s I gioielli della
Madonna and interviewed Friedrich Haider in his office in SND’s modern
offices in their new building. Performances of opera are split between the old
building (built in 1886 and last renovated in the 1970’s) and the new one
(designed originally in the 1980’s but not completed until 2006), which is
shared with the ballet company. The drama theatre uses another auditorium in
the same new building and there is also a studio theatre. 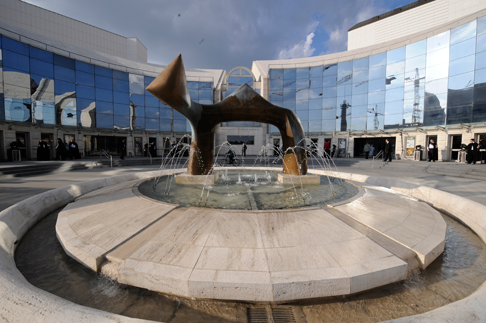 In person, Friedrich Haider is lively and affable, eager to communicate his
love for the music of Wolf-Ferrari and full of questions, so that our interview
was very much a dialogue and we concluded with a discussion of initiatives in
the UK to attract younger audiences, something that interests him keenly.

We started with Wolf-Ferrari, a composer about whom Friedrich Haider feels
very strongly. He first came across Wolf-Ferrari’s work in 2002. In London for
a recording with the London Symphony Orchestra, he found a score of
Wolf-Ferrari’s opera Il segreto di Susanna (Susanna’s Secret)
in a second hand book-shop. Reading the score through for the hour until the
shop closed, he fell in love with the work and bought the score. A performance
on the radio in Munich followed, with baritone Renato Bruson, and subsequently
Friedrich Haider made a recording live recording with the Oviedo Filarmonia.
After this first big step with Wolf-Ferrari, he looked at all the composer’s
scores that he could find, and was not disappointed. Friedrich Haider regards
over 70% of Wolf-Ferrari’s music to be good, and certainly above average for
many of the composers being discovered today.

Wolf-Ferrari was of mixed Italian and German heritage and trained in Munich.
Though he loved Wagner’s work he was against both Wagnerism and Verismo in his
own operatic style. His first comedy Le donne curiose (1903)
demonstrated his lighter touch, and made him an overnight success; Mahler heard
it and conducted it in Vienna. Though Wolf-Ferrari would write 9 comedies,
I gioielli della Madonna which SND is performing, is very different in
style, being darker, eclectic and more dramatic (and is often erroneously
regarded as an essay in Verismo). Friedrich Haider feels that you must know it
to truly appreciate it, but that the work has everything that an Italian opera
needs. 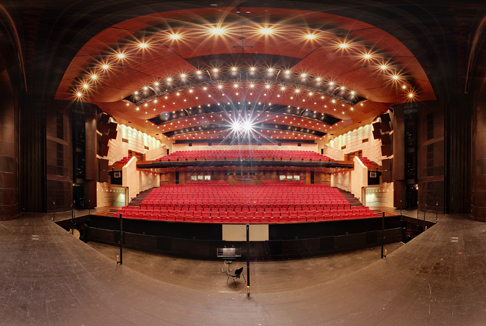 The interior of the new Slovak National Theatre

The plot is, on the surface, quite simple: two men Gennaro and Rafaele
compete for the same woman, Maliella, and Gennaro steals the jewels of the
Madonna to get her, with tragic results. Friedrich Haider sees the musical
style of the piece arising because the plot demands it. It is the only work in
which Wolf-Ferrari demonstrates that he can be a modernist, with passages at
the end of Act 3 which blast tonality with a sequence of chords which you can
no longer analyse. There are four bars which Friedrich Haider calls futuristic
and remind him of Shostakovich, demonstrating that Wolf-Ferrari had
post-Romantic harmony at his finger tips.

Friedrich Haider does not see Wolf-Ferrari’s eclectic style as conscious,
but rather it reflected the way the composer felt about the needs of the plot.
He quotes Wolf-Ferrari as saying that when you write in D major it is important
that it is a new D major, and he goes on to point out that Wagner followed the
harmonic complexity and daring of Tristan und Isolde with the opening
of Die Mestersinger which is in C major, which Friedrich Haider calls
a C major which has never been heard before.

Friedrich Haider, isn’t interested in the particular style of a piece, for
him if a work is good or not is expressed by the work itself and not its style,
and he emphasises that he does not believe in the linear development of music,
pointing to Richard Strauss’s development after the daring of Elektra.
Also a pianist, Friedrich Haider goes on to comment that having played many of
Richard Strauss’s songs he has realised that the C major which Richard Strauss
writes at the beginning of his career is very different to the C major at the
end.

I gioielli della Madonna can seem just a common criminal story But
Friedrich Haider finds a deep psychological meaning in the work which makes it
more rewarding to interpret. The society depicted in the piece is very much of
the South, with a strong connection to religion and a cult of the Madonna which
he calls much more than religion, being positively existential. The whole piece
rooted in this society and for a production to work it needs to have Southern
Italy (or perhaps Southern Spain) as its setting. For the people in this area,
Gennaro’s stealing of the jewels from the statue of the Madonna is the most
terrible thing that he could do.

Friedrich Haider is also keen to explore Wolf-Ferrari’s links with
analytical psychiatrist Carl Jung (1875-1961) whom he met in Vienna, citing the
way Gennaro’s obsessions with his mother, the Madonna and with his
step-sister Maliella link to Jung’s woman/Madonna/mother archetypes. He also
points out the way Wolf-Ferrari characterises Rafaele and the Camorra with
jolly music (including a waltz) rather than solemn, dangerous music. It shows
they are like you and me, and not always dangerous. 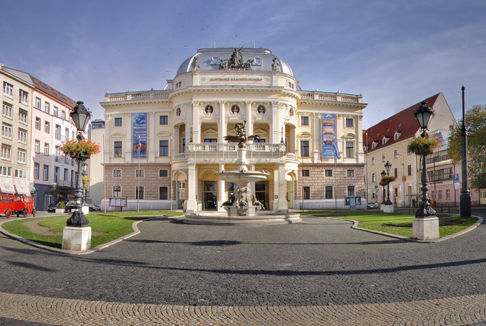 Perhaps the most interesting aspect is the way Friedrich Haider links the
jewels of the Madonna to Rafaele’s attitude to Maliella. She is his Madonna,
and when she loses her virginity (her Jewels) he is no longer interested.

During the rehearsal process they realised that the piece was still relevant
as papers were full of an event when in Southern Italy a procession of the
Madonna stopped and made a bow outside the house of a Mafia boss who was under
house arrest.

Wolf-Ferrari’s opera buffa works can be difficult to perform because of the
transparency of their orchestration, but Friedrich Haider sees the difficulties
of performing I gioielli della Madonna arise because of the work’s
complexity, both in terms of harmony and instrumentation. It is not simply
written and for a conductor it is not easy to manage. (I suspect that this and
the large number of small solos are perhaps also behind the work’s absence from
the opera stage).

The large chorus and number of soloists make the work logistically difficult
to stage though Friedrich Haider has benefited from the big SND ensemble and
the strong choral scene in Bratislava, thus making it easy to cast the many
smaller roles with quite a few being sung by members of the choir. The response
to the work of all the performers has been consistently enthusiastic and there
was a lot of positive energy in rehearsals. Rather intriguingly not only are
Wolf-Ferrari and Friedrich Haider of mixed Italian and German heritage, but so
is the stage director of the production Manfred Schweigkofler.

Friedrich Haider has recorded a number of Wolf-Ferrari’s works, including
the violin concerto which Wolf-Ferrari wrote in 1943 for the young violinist
Giulia Bustabo with whom he had fallen in love. When planning the recording,
the young violinist Benjamin Schmidt agreed to look at the score (it was a work
he did not know), but after reading the score through Schmidt was highly
enthusiastic. And the press were equal in their enthusiasm for the work, when
the recording was released. Friedrich Haider feels a strong connection with
Wolf-Ferrari, and regards such success as not so much his as for the composer.

Other recordings planned includea setting of a Biblical story,
Talitha Kumi (a sacred mystery for tenor, baritone, choir and
orchestra), all the overtures and intermezzos, an early serenade and the late
missa brevis. They will also be recording the performances of I gioielli
della Madonna and are currently seeking a record company.

I gioielli della Madonna is being performed in SND’s new building,
which Friedrich Haider regards as being acoustically too dry, but it has
excellent technical facilities. SND is a substantial organisation with 950
employees and they do 150 operas per year (reduced from 170 by Friedrich Haider
in order to facilitate more rehearsal time), along with ballet and drama.

There has been a 20% increase in ticket sales since he took over, and
Friedrich Haider comments that though they are never totally happy and always
find something to improve, their work is there to be judged by critics and
people and this increase shows that people appreciate the work. Friedrich
Haider has also tried to have a fresh, more modernist approach in the stage
direction, though he admits that the production of I gioielli della
Madonna is perhaps conservative.

Regarding modernist direction, Friedrich Haider takes a pragmatic approach
commenting that he does not want stupid things, but some modern direction can
be good and he cites as an example the Peter Konwitschny production of La
Boheme which the company premiered in January 2014. But an audience must
want to see a production, and there is the cost to consider, but Friedrich
Haider wants productions in a style which will speak to the audience of today.

He regards direction in Germany today as being in something of a corner.
Directors need to remember that an audience is coming to the work and it should
be appreciated by them, and understood by them and for Friedrich Haider too
many directors forget this. As with most other opera companies he is concerned
with the number of young people coming to see productions, and is pleased that
their numbers in Bratislava have increased, pointing out that this is not the
case in many companies in Italy and in Germany. SND is doing more young
people’s productions and these have been received fantastically.

Up until now Friedrich Haider has been both Music Director and Opera
Director, but he is stepping down as Opera Director feeling that combining the
two roles is too tiring and he wants to devote his energy to the music but will
feel that he can still comment. He also wants to continue his campaign to
attract young people, taking it out of the opera house and go to universities
and schools to speak about music and opera. He points out that though when you
talk to them people are interested, they need to know about opera first, to
know that it exists and what it is about.

Though we come to the end of our allotted time, our discussions continue as
Friedrich Haider escorts me out of his office, still full of alert energy
despite being interviewed by a series of journalists and highly interested in
what is going on in musical and operatic life in the UK.