At any rate, there is
now no more need, if ever indeed there were, to ‘make allowances’, and it
is difficult really to consider a company with such extensive programming as
Opera Holland Park to be in any meaningful sense ‘smaller’. This new
production — reusing its 2012 Gianni Schicchi — of Puccini’s
complete Trittico may well be the best thing I have yet seen and heard
at Holland Park.

Yet again, any reservations I might pre-emptively have held in
abstracto concerning a small-ish orchestra (the outstanding City of London
Sinfonia, strings 6:5:4:3:2) vanished within a few bars; the acoustic may sound
unpromising in an unpromising performance, but in one such as this, with truly
excellent conducting throughout from Stuart Stratford, there was no problem
whatsoever. Dynamic contrasts and continuities could hardly have been more
powerfully — and sensitively — communicated. Climaxes were shaped with
unfailing conviction, matched, one felt, with as true an understanding as
Puccini’s own of the dramatic ebb and flow. Indeed, the importance of rhythm,
and its inextricable alliance to increasingly adventurous harmony, was
projected in Il tabarro as almost a symphonic poem of the Seine itself
— were that not woefully to underplay the role played by Stratford’s
splendid cast. The post-verismo (if in fact we are post-) darkness of the
score, lit by shards one might relate to Stravinsky, Schoenberg, or Debussy,
but which one would be quite wrong to consider in any sense derivative, told of
a Paris both distinct from and yet related to La bohËme, Puccini’s
self-quotation playful acknowledgement rather than necessity, so deeply imbued
with style and meaning was the musical account. 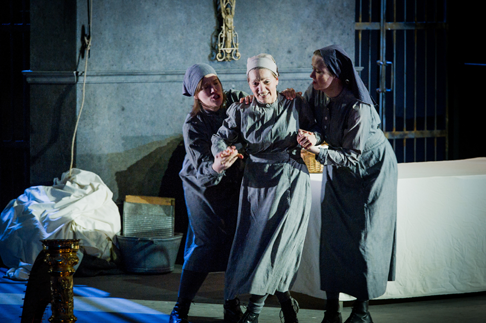 A scene from Suor Angelica

Different colours, different sound-worlds presented themselves in Suor
Angelica and Gianni Schicchi, the tragic noose tightening
inexorably in the former, all the more powerfully for its radiant feminity
(from which Poulenc surely learned so much in Dialogues des
CarmÈlites. I initially hardly felt like hearing the latter, immediately
following the tragic denouement of Suor Angelica. Performance put me
right, the revels now begun of a scherzo as full of zest and the comedic
complexities of commedia dell’arte as the Petrushka score
that more than once came to mind. Nothing was permitted to outstay its welcome,
‘O mio babbino caro’ for once a genuine moment of well-natured self-parody
rather than a would-be reversion, in which members of the audience may sit back
and ‘enjoy’. Indeed, Dante’s great comedy itself seemed to loom over the
enterprise as a whole — just as, in very different circumstances, it had over
Calixto
Bieito’s brilliant Berlin double-bill of Schicchi and
Bluebeard’s Castle earlier this year.

The casts were also as fine as I can recall from OHP, perhaps even finer
still. Even given a certain amount of duplication, the number of singers
involved is large, so as often put a strain upon one of those ‘larger’
houses. Here, no one disappointed, and the whole, as the well-worn clichÈ has
it, was considerably greater than the sum of its parts; indeed, there was a
real sense of company, such as one is more likely nowadays to find in
relatively ‘smaller’ circumstances. Anne Sophie Duprels convinced equally
in the conflicted roles of Giorgetta and Suor Angelica, her musical and
dramatic focus and shaping every inch the equal of Stratford’s. Stephen Gadd
and Jeff Gwaltney had one believe just as strongly in them and their plight in
Il tabarro; it may not be a lengthy opera, but these felt like fully
drawn characters, and the ‘smaller’ parts offered much of great interest
too. So did those in the other two operas. Other singers to stand out —
although it hardly seems fair to do anything but repeat the cast list — were
a vehement, Rosalind Plowright as La Zia Principessa, nobler than the convent
hierarchy, but possessed of similar, ruthless, yet perhaps ultimately more
conflicted coldness. Family lines exert their own pressure, as we should
shortly be reminded in Gianni Schicchi. Richard Burkhard’s protean
Schicchi, Sarah Pring’s slightly but not too outlandish Zita, and Anna
Patalong’s beautifully sung Lauretta headed a cast of true depth in that
final instalment. 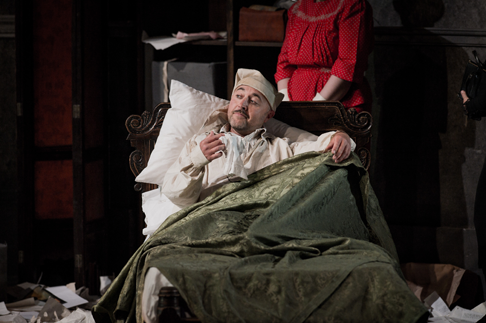 A scene from Gianni Schicchi

As night fell, the qualities of the three productions declared themselves in
different ways; that change in light — and temperature — proved especially
telling during the course of Suor Angelica. Neil Irish’s arched
backdrop for Il tabarro, commenting yet expanding upon the ruins of
Holland House, moved to the foreground for the laundry — inevitable thoughts
concerning convent repression there — in Suor Angelica and the
bedroom for Gianni Schicchi, laundered clothes serving dual purpose in
the two latter operas. There was, however, no attempt to force the three operas
closer together than that; they told their own stories, and we made connections
as we would. Martin Lloyd Evans ( Il tabarro and original director of
Gianni Schicchi) and Oliver Platt (Suor Angelica and revival
director of Schicchi) respected the works, which in turn seemed to
respect them for it. Movement and designs were in keeping with the dictates of
the action, scenic and musical alike, keenly observed without drawing undue
attention. The tragedy and comedy of human existence were the focus, from pit
and stage alike.