The protagonist, Hermann, is selfish, obsessive and remorseless: fixated on
the pursuit of love and riches, in his fanatical determination to learn the
secret of the three cards he threatens to shoot the Countess, who drops dead
from fright. Later, he abandons his beloved Lisa, who goes on to drown herself.
Tchaikovsky, however, gives us a more sympathetic hero: a mysterious, romantic
figure, wrought by passionate yearnings and suffering which are eloquently
conveyed.

One question which haunts both novel and opera is, ‘Is he bad or mad?’
Pushkin’s epilogue seems to leave no doubt: the novelist’s Hermann pays for
his self-regarding mania with his sanity. His mind torments him: he imagines
that he sees the dead Countess winking at him as she lays in her open coffin;
then, she comes to him in his room, an apparition promising the secret of the
three cards if Hermann marries Lisa and renounces gambling. In one final game,
believing he is playing an ace, he turns over the Queen of Spades — which
copies the Countess’s wink. Hermann loses both his money and his mind, and is
condemned to an asylum where, trapped in his neurosis, he mutters
unremittingly, ‘Three, seven, ace! Three, seven, queen!’ What is less
clear, though, is whether Hermann’s visions are just a drunken dream, have
sprung from his own paranoia and twisted passions, or whether he really has
communed with black spirits from ‘the other side’. 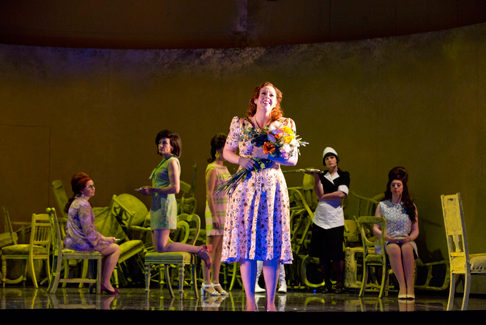 David Alden’s new production for ENO, with designs by Gideon Davey,
begins in the asylum: sitting alone on a sparse iron bed-stead, under
the unforgiving glare of a hanging lampshade and the passive gaze of an
unmoving clock-face stuck obstinately at five minutes to midnight, Hermann’s
mental and emotional distress are clear. Women and children ‘promenade’ in
the sunshine outside (or rather appear through a sliding hatch set into the
chilly green walls of the institution), but Hermann is as isolated from this
normality as he is from the uniformed aristocrats who swig champagne,
chain-smoke, and try to guess Hermann’s dark secret. The sickly light
(Lighting design, Wolfgang Goebbels) is broken by the flashes and shadows of
the coming storm, which disperses the crowds and foreshadows the trouble ahead.
A carved angel — which seems to have stepped out of one of Gustave DorÈ
illustrations for Paradise Lost — perches aloft.

In the second scene, the asylum wall is raised to reveal Lisa’s vast
‘chamber’. It’s hardly a boudoir, more of a ballroom — a sort of
Wonderland, where Tchaikovsky’s spinet has morphed into a grand piano, the
chairs have taken on a life of their own, leaping and landing in a byzantine
mound, and the fallen angels have multiplied. The time-scheme also becomes
somewhat ambiguous. Alongside the Red Army uniforms, Lisa is attired in a
rather un-fetching apricot 1940s frock, while Pauline and her friends sport the
minis, PVC and psychedelic print of the 60s.

And, if at this point Alden starts to blur time and place, in the Masquerade
Ball that follows things really get skewed. After the tableau of the
‘Faithful Shepherdess’ (the sliding hatch comes in useful, retreating to
provide a ready-made stage platform), the arrival of a bar-tender wearing a
blue anthropomorphic animal head signals that the masked ball is about to
become a plush party. For those not in the know, Alden provides a
helpful programme note: ‘A plushie is an individual who has a strong, usually
erotic, attraction to stuffed animals … Plush parties are adult lifestyle
events for which people dress up in life-size furry animal costumes often for
the purpose of anonymous sex’. So, served champagne by a periwigged, purple
frock-coated, outsize sun-glass donning Karl Lagerfield look-a-like, the
hippies and hipsters — elephants, bears, pandas, wolves — indulge in a
furry frenzy of orgiastic pleasures. The one moment of sanity is Prince
Yeletsky’s passionate aria to Lisa — sung with a lovely round tone and
impassioned sentiment by baritone Nicholas Pallesen. 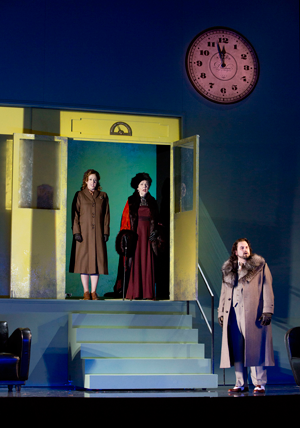 Giselle Allen as Lisa, Felicity Palmer as the Countess, and Nicholas Pallesen as Prince Yeletsky

Fortunately, after the interval the furry friends go back to the zoo, and
things get back on track. Indeed, the confrontation between Hermann and
Felicity Palmer’s Countess is the heart of production. Palmer, a frail figure
in a white nightgown — a cross between a Miss Havisham and a Bertha Mason —
emits an eerie Gothic pallor, but is still a terrifying force when she
interrupts the assignation of Hermann and Lisa in the second scene and demands
that Lisa close the window and go to bed. We see what Hermann is up against:
for the Countess is both a literal barrier between Hermann and his love, and an
embodiment of the secret knowledge which he desires. At the start of Act 2,
Palmer occupies a lone chair in the centre of the wide stage and her chillingly
quiet but penetrating rendition of ‘Je crains de lui parler la nuit’ seals
Hermann’s fate.

Tenor Peter Hoare takes on the title role. Although he seemed vocally
underpowered at the start, Hoare grew in dramatic and vocal stature as the
evening progressed, coping well with the demands that Tchaikovsky makes on the
singer’s stamina, strength and tessitura. Hoare shows us the disintegration
of Hermann’s mind, and his scene with Palmer’s Countess is terrific: by the
end of the opera we have witnessed the painful psychotic breakdown of
Hermann’s ‘mad aria’ and a delirious final scene of great power and
pathos. But, as he lurches from passion to despair, Hoare doesn’t have quite
enough lyric warmth to capture the devil-may-care heroism of Pushkin’s and
Tchaikovsky’s Byronic bad boy, or to fully win our sympathy. 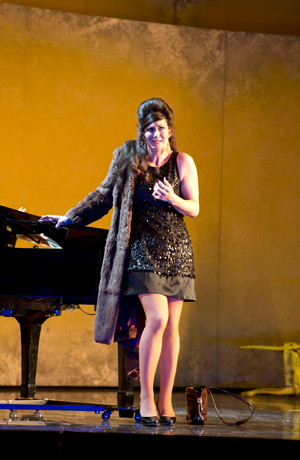 Moreover, it’s a big weakness of this production that there is almost no
spark of passion, even genuine interest, between Hoare and Giselle Allen’s
Lisa. Alden presents Hermann wandering in a hinterland between neurosis and
psychosis, which may be true to Pushkin’s tale, but Tchaikovsky gives us a
slightly different story — a love-triangle which ends with a double-suicide.
By inventing a new character, the worthy Prince Yeletsky, Tchaikovsky and his
librettist (his brother Modest) offer a foil to Hermann and a rival for
Lisa’s devotions — a human story alongside the Gothic equivocations. In
Alden’s production, there is no love, only sex and gambling. In the
penultimate scene, realising that Hermann revered the cards above her, Allen
sang with real vocal power and expressive impact, but it was rather too late in
the day for us to believe that there was genuine love between her and Hermann.
Lisa’s interactions with the vampish Pauline — the latter role was sung
with voluptuous richness and manner by Catherine Young, working her way through
an array of eye-catching lamÈ mini-dresses — and her maid Masha (Katie
Bird), were more convincing. The rest of the supporting cast were accomplished,
especially Gregory Dahl who, as Tomsky, exhibited a relaxed manner, robust tone
and superb diction.

The enlarged ENO Chorus were superb: stentorian in the rumbustious numbers,
wonderfully compassionate and restrained in their final muted pleading for
pardon and rest for Hermann’s raging spirit. Edward Gardner, in his last
production as Music Director, conducted the ENO Orchestra with the combination
of precision, clarity and dramatic sweep to which we have become accustomed. In
the orchestral prelude we had both the tenderness of Hermann’s love and the
turbulence of his fate motif. He both urged his singers on, and supported
sympathetically: in the Countess’s aria, the low vocal line was never
overwhelmed yet we could hear every nuance of the clarinet commentary, the
muted string lines and eerie viola gestures. The players gave their all,
through the gamut of the opera’s different styles: we had a vivacious
polonaise for arrival of Catherine the Great, and Classical grace for faux
Mozartian accompaniment to the tableau (a fitting parody, of course, for in Act
Two of Mozart’s The Magic Flute, the bird-catcher Papageno declares
he will hang himself because he fears he has lost his beloved Papagena — a
parodic foil to Hermann’s angst). 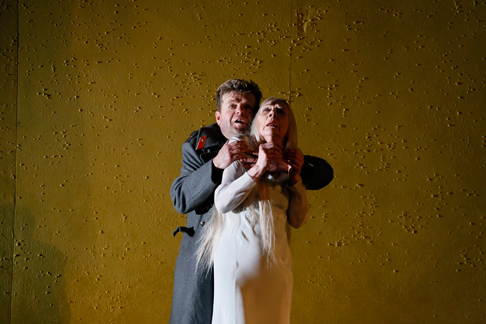 Peter Hoare as Hermann and Felicity Palmer as the Countess

ENO will be hoping that the trick of the cards will play its part in
assuaging their own financial problems. And, there are many dramatic and
musical treats that merit taking a gamble on a ticket. However, the final scene
in which, having witnessed Hermann’s demise, the aristocratic in-set
nonchalant drink, smoke and flick cards into the air, seems hard of heart.
Alden suggests: Hermann is gone and forgotten and let that be a lesson to you
all. But, given that Hermann has paid with his soul, he might have been offered
more compassion.