Well, only if you take as given the increasingly untenable assumptions some ‘major’ opera houses trumpet concerning their audiences – and
perhaps not even then. That Birmingham Opera can sell out Stockhausen immediately and that the Royal Opera House – by any standards, a different
animal – can sell out operas by Benjamin and Birtwistle puts paid to lazy talk and should put paid to lazy programming, though does so far less often
than should be the case. If one takes as one’s core lazy listeners, consequences will follow; if one leads, and especially if one acts upon
widespread thirst for modernist repertoire, broadly conceived, other, better consequences will do so. Strauss, it might be countered, is a different matter
again, and perhaps he is. But he is hardly unpopular, and if many people have not heard Intermezzo, despite a recent staging at Buxton, then grant
them an opportunity such as Garsington has. 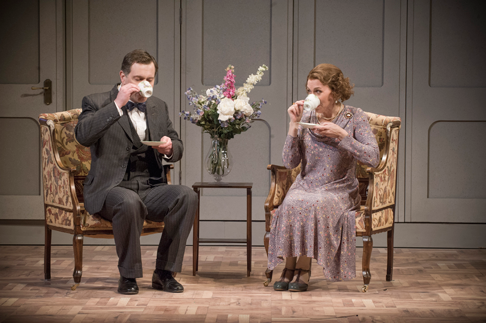 Mark Stone as Robert and Mary Dunleavy as Christine

An excellent performance was given by the Garsington Orchestra – only once, early in the second act, did I sense a little tiredness – under the
baton of Jac van Steen. The conductor’s deep knowledge and understanding of the score, of its post-Ariadne idiom, of its opportunities and
challenges had been displayed in my interview with him; it was displayed just
as clearly here. Everything was in its place, as it must be; Strauss at his most unsparing allows no room for error. The orchestral interludes put me a
little in mind of the ‘closed forms’ of Busoni and Berg, whilst very much retaining their own character. It was perhaps most of all, though,
Strauss’s economy, which yet never denies his love of musical proliferation, that shone through. Not a note is wasted; nor was it in performance.

The cast proved persuasive advocates too. Mary Dunleavy’s vocal security was matched to a subtle reading of Christine’s character that
extracted her from the realm of patronising, even misogynistic caricature: no mere ‘shrew’ here, but a credible woman of strengths, weaknesses,
above all agency. Mark Stone made a powerful impression as her husband, perhaps the closest of all Strauss came to a self-portrait. (The creator of the
role wore a mask so as to make him resemble the composer all the more closely. As Norman del Mar observed, this was a ‘striking volte-face
after Strauss’s anxieties over the Young Composer in Ariadne’.) One could have taken dictation, verbal as well as notational, from
most of his crystal-clear performance: Lied writ large in the best sense. Sam Furnes’’s Baron Lummer offered a well-judged mixture of
vocal allure and immaturity of character. Ailish Tynan’s perky Anna proved just the right sort of knowing, informed servant. In a fine company
performance, other singers to stand out included Oliver Johnston’s finely sung – and acted – Stroh, Gerald Collett’s equally
impressive Legal Counsellor, and Benjamin Bevan’s honourable Notary. Everyone, however, made a considerable contribution. 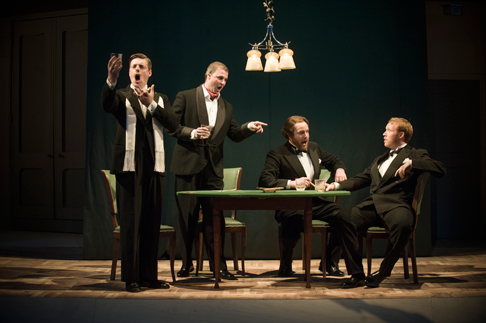 Bruno Ravella’s production takes the work seriously, on its own terms, and succeeds accordingly. Giles Cadle’s resourceful set moves us in and
out of a Garmisch-style villa, modern (to Strauss), without being avant garde. There is always a strong sense of who everyone is, and why he or she is
acting in the manner we observe. The card game is, as the conductor observed to me, wonderfully, knowingly realistic; such
understanding could hardly be feigned. The crucial element of communication and its speed – the telephone, the telegram, Strauss’s pace of
conversation delivery – offered an excellent example of musical performances and production acting as one.

One can speak of the plot being trivial, if one wishes. (I suppose one can speak about anything if one wishes, so that was an especially meaningless
claim!) But some of that seems to be snobbery; would we think differently, were these gods, or indeed from another class, ‘higher’ or
‘lower’. In his original Preface, replaced when the score was published, Strauss not unreasonably claimed to break genuine new ground in the
variety of everyday life he had brought to the stage; Hindemith and Schoenberg would follow suit in Neues vom Tage and Von heute auf morgen. Still more to the point, though, (high) bourgeois domesticity matters to those involved in it; it certainly matters to the
little boy caught at the centre of marital dispute and potentially breakdown, as countless children, sleepless with worry at raised voices downstairs, will
tell you. (Young Louis Hynes deserved great credit for his portrayal of that difficult role, here rendered more difficult still.) Now Intermezzo
is not essentially ‘about’ that, although I think it is more concerned with it than, say, Elektra is; but a subtle yet perceptible
shift in that direction from the production did no harm in opening up the work. 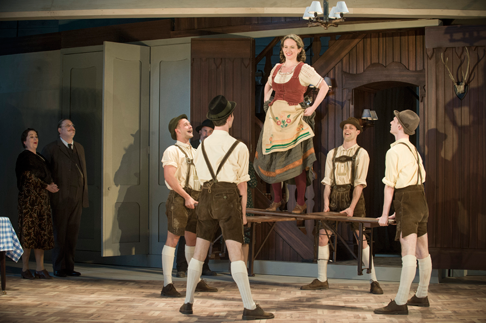 Only one gripe, really: it was a great pity that the opera was sung in English, and that Andrew Porter’s translation was the version used. Given
surtitles, there really is no need; Strauss really does not sound right in translation, still more so as here, when odd words remained in German, the
contrast jarring. Moreover, accents tended to slide – or at least to slide more noticeably to an English ear. But, as ever with Strauss, in the
battle of Wort with Ton, there was little doubt which would emerge victorious. This was a far from insignificant victory over
Strauss’s critics, Garsington’s latest estimable contribution to a hero’s after-life.