Recent years
have seen memorable performances of Britten’s Rape of Lucretia and
several operas by Hans Werner Henze, as well as the company’s new
American Repertoire Program, which has commissioned new works on American
themes, including Kevin Puts’ Silent Night.

As part of the latter program, Opera Philadelphia has recently presented the
world premiere of Daniel Schnyder’s Charlie Parker’s Yardbird.
This project could not go far wrong. The idea of jazz-classical fusion is
attractive to many people, and Parker is a jazz icon who remains popular and
influential today. All five performances were sold out well in advance. On June
12th, the night I attended, the audience was noticeably more diverse
than usual—and they rewarded the performance with a standing ovation. 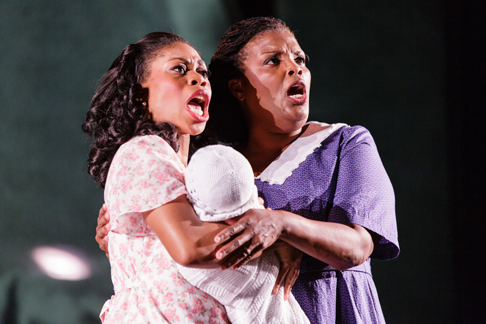 Each sang well in Yardbird. Brown’s large, warm voice easily
filled the hall. Mumford provided a consistent combination of elegant focus,
rich color and sensitive phrasing. And Brownlee, on stage almost all night,
sang with tireless elegance and passion, particularly at the top of his voice.
Two Virginians, mezzo Chrystal Williams and baritone Will Liverman, made
promising company debuts as Rebecca and Dizzy Gillespie respectively. All
seemed comfortable singing in the grey area between jazz and classical music.
The company’s music director Corrado Rovaris led a skilled pit band of 15
skillfully, if a bit cautiously. The sets were simple, yet effective.

Still, I believe—in contrast to what most critics have concluded—one
essential ingredient was clearly missing: a great opera. Neither the words nor
music of Yardbird matched the quality of the premise, the singers, the
production and the musical preparation.

Yardbird’s greatest weakness lies in its libretto, which lacks
narrative coherence and lyrical depth. The initial premise of the plot is
absurd: Parker languishes in quasi-limbo for two days after his own death,
trying to finish a large classical work, which he never writes. In fact this is
simply a plot device to permit flashbacks, focusing on Parker’s complex
relationships to women: his mother and two wives, plus his patron and hostess,
Nica de Koenigswarter.

But why should we care about Parker’s relationships? As a man, Bird was
charismatic and inconstant. Yet his personal life creates a static plotline. He
made a mess of his love life, but with nothing special is describing his
various wives and children, the drama lacks weight. Episodes follow one another
without any clear sense of direction. Feeble efforts to create links to civil
rights—a movement with which Parker never had anything to do—only serves to
highlight the central void.

This lack of content is reinforced by pop-style lyrics that range from the
banal to the unintelligible. One example must suffice. Just before Parker dies
(for real, this time), Nica sings:

I do not know what precisely this means, what deeper theme about Charlie
Parker it expresses, or why Nica is the appropriate character to sing it. 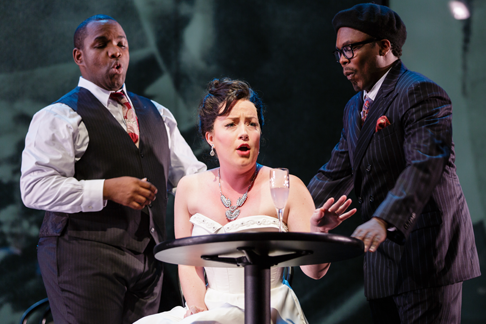 Will Liverman as Dizzy Gillespie, Lawrence Brownlee as Charlie
Parker, and Rachel Sterrenberg as Chan Parker

The truth this libretto evades is that we remember Charlie Parker for one
reason only: he revolutionized jazz. In Miles’ famous (if surely apocryphal)
quip: “You can tell the history of jazz in four words: Louis Armstrong,
Charlie Parker.” While it is difficult for an opera librettist to dramatize
musical creation, it is possible, as Wagner’s Die Meistersinger,
Rimsky-Korsakov’s Mozart and Salieri, Pfitzner’s
Palestrina, and even Frank Zappa’s Joe’s Garage
demonstrate. It is a pity this libretto, one number excepted, hardly tries
to do so.

So for depth and weight, we must look to Yardbird’s musical
score. The composer, Swiss-born and New York-based composer Daniel Schnyder, is
a remarkably prolific and multi-talented musician. He tours as a jazz
saxophonist and writes prolific so-called (“third stream”) music combining
jazz and classical elements. Some of his compositions, notably his concertos
(above all the one for bass trombone), chamber music, and arrangements of jazz
standards have become minor classics. He has also written pieces for
non-Western instruments, incidental music, and at least two previous operas:
Casanova and The Tempest.

With Yardbird, however, it is clear from the start that Schnyder is
shying away from the central challenge facing any third stream composer, namely
to find a way to integrate classical and jazz music, as Gershwin did 80 years
ago in Porgy and Bess, but in a way that takes account of the
subsequent evolution of jazz from swing to the modern style. Since the modern
style began with Charlie Parker’s be-bop, what could be a more appropriate
platform on which to do this than an opera on his life? Surely Schnyder is more
qualified than any other contemporary composer to take on this challenge. And
precisely because this innovation is very hard to achieve—it is difficult
even to imagine what it would mean—I would prefer to hear an opera that
really tries to achieve it, even if it fails.

Instead, Yardbird follows a cautious and tired formula already
employed by other post-serialist operas that seek to synthesize classical and
jazz genres, such as John Harbison’s The Great Gatsby. Let’s call
it a “classical-pop pastiche.” Number after number repeats the same scheme:
a modern quasi-atonal classical introduction morphs into to jazzy dance tune
with modern harmonies (diminished chords, prominent 9ths and
13ths), to which characters sing. The score is sprinkled with
many—sometimes quite humorous—musical references and quotations. Little
snatches of “Cherokee,” “Round Midnight,” “Moose the Mooche” and
other Parker tunes and licks, not to mention a bit of Beethoven’s Eroica,
float through the orchestra.

The result is a clever and well-crafted score that makes for modestly
entertaining listening minute by minute. A few moments, not coincidentally
notably those having to do with Parker’s music—Bird’s soliloquy to his
horn and his duet with Dizzy Gillespie—stand out as truly memorable. Yet most
of the individual arias and ensembles lack dramatic shape and, not being
coherently written through, fail to gather and maintain musical momentum across
longer spans of time. Ultimately the score becomes repetitive and tiresome,
just as similar operas by Harbison and other worthy and talented composers did.

Whatever Yardbird’s underlying merits, Opera Philadelphia should
be praised for taking risks on innovative new operas and has every reason to be
proud of this interesting musical experiment.