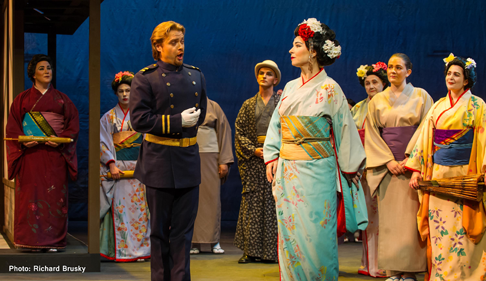 Following the tradition of Japanese theater, Director Henry Akina used graceful stagehands completely dressed in black with veiled faces to perform onstage tasks such as supplying lanterns for the love duet. Akina showed his audience both sides of the story, Butterfly’s desire to become an American wife and her life in the Japanese society that surrounded her. He enabled the singers to create memorable characters that will live on in the minds of onlookers long after the end of each performance.
General Director Luana DeVol chose large voiced singers and the performance was a golden age singfest. Russian tenor Viktor Antipenko had a bright burnished tone and the ability to connect with the audience’s emotions. In the first act he was a patient and devoted lover who never expected Butterfly to think of him as a long-term husband. Despite Sharpless’s warning, it was not until the last act that Pinkerton realized what he had done. His “Addio, fiorito asil di letizia e d’amor!” (“Farewell, flower-clad refuge of joy and love”) was heart rending as he realized that Cio Cio San’s face would always haunt his dreams.
Moldavian soprano Inna Los is a small woman with a huge voice, and that makes her a perfect choice for Madama Butterfly. Puccini accompanied Cio Cio San’s music with a relatively heavy orchestration, but the story tells us that she was only fifteen years old. At the end of Act I Pinkerton carried his young wife upstage toward their bedroom.
Los’s characterization matured over the space of the opera. A giddy young girl enjoying her wedding at the beginning, Butterfly later became a caring wife and mother who knew how to economize when times were difficult. She sang her aria “Un bel dÏ” (“One Fine Day”) with powerful tones and passionate involvement that brought tears to many eyes and won her a well deserved round of applause. At the end she had to realize that there was no longer a place for her in Pinkerton’s world. Like her father before her, Butterfly concluded that if she could no longer live with honor she would be strong enough to do what her culture demanded. When she tumbled out from behind the screen there was not a dry eye in the house.
As American Consul Sharpless, Daniel Sutin was a bureaucrat who paid more attention to form than he did to Butterfly’s emotional well-being. He sang with dark tones and his voice was a good contrast to that of Antipenko. Actually, the whole cast was well balanced. As Suzuki, Stephanie Weiss sang substantial harmonies with Los and their Flower Duet was enchanting.
Joseph Gaines was an amusing Matchmaker who added a bit of levity to a tragic story. The choice of Brian James Myer’s obviously shallow Yamadori as a suitor for Butterfly showed how little the men of the Nagasaki paid to serious matchmaking. Eugene (Trey) Richards was an impressive Bonze whose curse colored much of the rest of the opera. Valerie Sokolov Ore sang Kate Pinkerton’s few lines well and gave the audience the impression that she would be a good mother to little Dolore.
Megan Frank’s choristers sang their Humming Chorus with plangent harmonies presaging the tragedy to come. It is the conductor who holds the entire performance together and Gregory Buchalter’s attention to detail made this production memorable. His interpretation involved brisk pacing and increasing tension along with subtly nuanced expressivity as the gripping story drew ever nearer to its inevitable conclusion. Buchalter, the company’s artistic director, is a find for Opera Las Vegas. I wish they would present more than one opera a year with this fine conductor.
Maria Nockin