In fact, it was
Hofkapellmeister Salieri — teacher of Beethoven, Czerny, Schubert, Meyerbeer
and Liszt — who was the ‘celebrity’, enjoying elevated social standing
and the artistic esteem of his contemporaries, including, to judge from this
superb production of Salieri’s La grotta di
Trofonio by Bampton Classical Opera, Mozart himself. For, as scholars such
as John Rice have noted, the latter does not seem to have been averse to a
little musical and dramatic ‘borrowing’ from Salieri.

The plot of La grotta di Trofonio blends conventional buffo
merriment and entanglements with darker supernatural currents. The
aristocratic Aristone has two daughters: Ofelia is serious and solemn with a
penchant for philosophy; Dori is frivolous and fun-loving, with — in this
production — a partiality for amateur dramatics. They are due to wed their
beaux, having chosen suitors whose personalities perfectly match their own: the
pensive Artemidoro and the playful Plistene respectively. However, an encounter
in a magical wood with a meddling ‘master-of-ceremonies’, who tempts first
the men and then the girls into his enchanted cave, results in radical
transformations of personality which lead the lovers to question the very
nature of love itself. 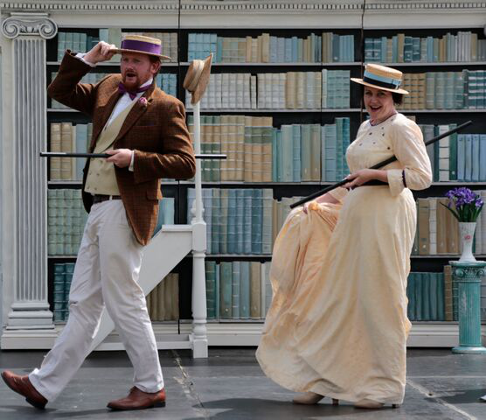 Nicholas Merryweather as Plistene and Aoife O’Sullivan as Dori

As well as an echo of Shakespeare’s A Midsummer Night’s Dream
there is also obvious foreshadowing of Mozart’s CosÏ fan tutte
and, in its mixture of comic mundanityand the blackly macabre, Don
Giovanni. Research by Rice suggests that the network of
cross-fertilisation and derivation was complex. In his somewhat unreliable
Memoirs, Da Ponte described Salieri as ‘a most cultivated and
intelligent man […] whom I loved and esteemed both out of gratitude and by
inclination’; but their first collaboration, Il ricco d’un giorno,
flopped in 1784 and the composer wasted no time in blaming his literary
partner, declaring that he would sooner cut off his own fingers than accept
another libretto from Da Ponte. Salieri’s La grotta di Trofonio was
first staged at Vienna’s Burgtheater in 1785, shortly before Figaro
was premiered there, with a libretto by Da Ponte’s main rival, Giambattista
Casti. However, the success of Mozart’s Il nozze di Figaro in May
1786 seems to have encouraged Salieri to reconsider his assessment of Da
Ponte’s literary skills, for two extant trio drafts discovered by Rice in the
National Library in Vienna suggest that Salieri began work on a setting of the
CosÏ libretto in the late 1780s. The work was, for reasons we can
only speculate, abandoned, and it was Mozart who was to pick up the discarded
text. How ironic, then, that Salieri’s La Grotta di Trofonio seems
to anticipate the satirical artifice of Mozart’s comedy of 1790.

Both operas possess a meticulously wrought symmetry; moreover, there are
striking similarities between some of the ensembles. Even the casts overlapped:
having taken the role of Aristone in La Grotta, four years later the
veteran buffo bass Francesco Bussani stepped into Don Alfonso’s shoes, while
Francesco Benucci swapped the role of Salieri’s magician, Trofonio, for
Mozart’s Guglielmo. Cast as the contemplative Artemidoro by Salieri, tenor
Vincenzo Calvesi was Mozart’s first Ferrando; restored to his serious self,
Artemidoro sings a cavatina, ‘Sognai, o sogno ancor?’, which has much in
common with Ferrando’s ‘Un’aura amorosa’.

This first UK-staging in modern times by Bampton Classical Opera was first
presented in July, in the Deanery Gardens at Bampton, Oxfordshire. The outdoor
setting and summer sunshine lent the evening a light-hearted ebullience which
perfectly matched the directorial tone; the latter maintained an admirable
balance between irreverent wit and musical sincerity. I wondered how the
production would translate to the more sombre Baroque setting of St John’s
Smith Square with its monumental pediments and Corinthian columns. But, in the
event, with some slight tweaking of the set placement to fit the new
dimensions, Trofonio’s ‘cave’ seemed quite at home amid the lofty
spaciousness.

In this production, director Jeremy Gray once again demonstrates an
impressive ability to employ parallels and allusions which, as well as
providing visual wit and invention — both entertaining and erudite — offer
fresh, thought-provoking ideas about an opera’s essential ‘meaning’. The
opera opens in Aristone’s library, a post-Edwardian domain whose dusty
shelves of lofty tomes conceal the patriarch’s secret stash of gin: clearly
all is not what it seems, and the young lovers’ demure boaters and bodices
will soon give way to less sedate attire. For, with their father’s blessing
assured, the engaged couples make the mistake of wandering into the wood, and
into the conjuror’s clutches; and, it is not just their personalities which
will be translated but Time itself. The bookcases swivel to reveal a blue
1960’s Police Box from which materialises a Tom Baker look-a-like — long
stripy scarf, grubby blue frockcoat and a fondness for jelly babies: a slightly
down-at-heel Edwardian gent turned eccentric apothecary of the emotions. A spin
in the Tardis turns Artemidoro into a long-haired rocker, sporting bandana and
flares, flamboyantly strumming air-guitar; a dash through the decades
transfigures the demure Ofelia, a flash of a knee-high white boot anticipating
her metamorphosis to bopping 60s wild-child in thigh-high A-line shift dress
(costumes, Vikki Medhurst). 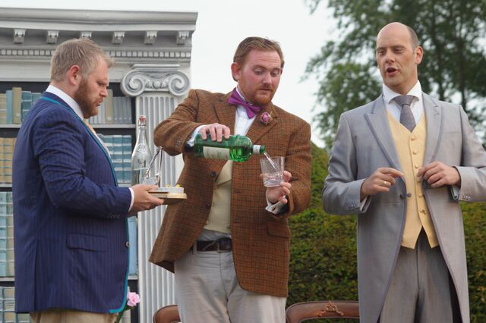 Christopher Turner as Artemidoro, Nicholas Merryweather as Plistene, and Matthew Harrison as Aristone

But, the absurdity and impudence of the staging never got in the way of high
musical values or dramatic authenticity. Salieri’s arias were treated with
respect, and sung and staged with refinement; similarly, the numerous inventive
duets and ensembles were crafted to create dramatic pace and variety.
Remarkably, the cast, apparently so suited to their primary manifestations,
were equally convincing when subject to Trofonio’s subversive spells,
demonstrating impressive diversity and range.

As the spirited Plistine, baritone Nicholas Merryweather was a strong vocal
and stage presence, using the text (an amusing and deft translation by Gilly
French) with characteristic discernment, and demonstrating a wide range of
vocal colours as Plistine’s temperament evolved and revolved. Swapping his
stylish blazer for a slightly-too-small, homely cardigan, on exiting The
Doctor’s Tardis Merryweather tempered the ardour in his voice to deliver a
gently lyrical reflective air, his new-found and utterly convincing gravity and
self-possession further reinforced by the rich, low woodwind accompaniment.

Tenor Christopher Turner had no difficulty with the considerable vocal
challenges of Artemidoro’s tenor arias: the evenness of tone and colour was
impressive during the expansive phrases of his long Act 1 aria; and, if his
boogying and grooving was a touch gauche post-transformation, it only added to
the charm, reminding us of Artemidoro’s former solemnity.

Irish soprano Aoife O’Sullivan was vivacious as the gregarious,
high-spirited Dori. O’Sullivan’s voice is pure and well-centred, and has a
lovely sheen which perfectly captured Dori’s joyful breeziness. She and
Merryweather were a beguiling comic duo, but the dull and dowdy Dori was just
as convincing.

Writing of Bampton’s July performance at the Deanery, I admired the
singing of Ukrainian mezzo-soprano Anna Starushkevych, in the role of Ofelia,
commenting that her voice seemed to be ‘growing in richness, depth and
allure’. It was disappointing to learn, therefore, that problems with a visa
meant that Strarushkevych was stranded in the Ukraine (evidently, having the
Prime Minister as one of your company’s patrons is no advantage in the face
of the administrative intractability of international bureaucracy). The role of
Ofelia was ‘split in two’, with Catherine Backhouse singing from the side
of the platform and French-born actress Marieke Bernard-Berkel acting the part.
Any misgivings were immediacy swept aside, however; and, oddly but somewhat
neatly, in an opera whose central trope is the ‘split-personality’, this
bipartite presentation was a piquant addition! Backhouse studied on the Opera
Studies course at the Guildhall School of Music, and her eloquent, engaging
vocal performance demonstrated why she has now been awarded a Fellowship at the
GSMD. Her bright, vibrant sound projected well, seeming to emanate from the
heart of the drama; she coped with the demands of the role — the rapid, large
leaps, for example, in the central section of Ofelia’s first aria — and had
the stamina and diversity of tone required in the long aria sung upon
Ofelia’s transformation in Act 2.

Bernard-Berkel had been the Assistant Stage Manager for the production
(which, in addition to performances at Bampton in July, was also presented at
Westonbirt, Gloucestershire, at the end of August). But, even so, given that
she had had only a single rehearsal in which to familiarise herself with the
details of the intricate stage choreography and timing, her self-assurance and
total credibility in the role were noteworthy and outstanding. Apparently,
Bernard-Berkel has some experience in silent movies, and
this evidently served her well; Ofelia’s shock, in the Act 1 Finale, when
confronted with an Artemidoro who has abandoned his bust of Plato for an
air-guitar was a perfect picture of disapprobation and distaste.

As the debonair Aristone, baritone James Harrison demonstrated a sharp eye
for potential drollery, and an attractive voice. The second Act, in which the
female characters’ personality-switch follows that of the men in the
preceding Act, might have been repetitive, but Harrison’s strong singing at
the start of the Act, when he tries to reassure his daughters, and Aristone’s
urgent, compelling appeal to Trofonio at the close, offered a neat dramatic
frame for the psychological merry-go-round on which the young lovers spin.
Trofonio’s richly scored aria of self-congratulation was also a highpoint of
the Act. In the outdoor setting at Bampton I found Matthew Stiff’s Trofonio a
tad underwhelming; the role was lyrically sung, and the diction in the
recitatives was excellent, but that touch of dark menace was missing. Here, at
St. John’s, Stiff made much more of an impact — he created a mysterious
amalgam of whimsy and brooding. Trofonio’s first aria, half-way through Act
1, was an alarming invocation; and the small male chorus successfully evoked
the ‘invisible spirits’ that the dark magician summons. Stiff’s baritone
carried well, and he used both text and voice effectively, countering the
parody of his time-travelling impersonation, to powerfully conjure a demonic
world of the black arts — indeed, at the end of the opera, Trofonio boasts
that he is judge and master of the Underworld and of the Devil!

St John’s is not an ideal venue for opera, and one problem that has to be
resolved is the matter of where to place the orchestra. Bampton have
experimented with various arrangements over the years; here, the musicians of
CHROMA, conducted by Paul Wingfield, were placed behind the set. Whatever
difficulties this might have presented, the singers dealt with them confidently
and Wingfield had an excellent command of both the overall dramatic pace and
the expressive shaping of particular numbers, allowing for moments of stillness
within the prevailing muddle and mayhem. Also, I found that Salieri’s
wonderful writing for the woodwind was even more immediate and characterful
than it had been at Bampton. The clarinets and bassoons introduced Ofelia’s
first cavatina, in which she sings of her devotion for Artemidoro, with a
delicious sweetness and sentimentality, worthy of the Countess’s Act 2 aria
in Figaro. As Artemidoro wandered through the forest, nearing the
sorcerer’s supernatural ‘cave’, oboes and flutes conveyed a bucolic
serenity which would soon be overturned by the magical machinations.

Assistant Director (movement) Triona Adams appeared as the non-singing,
put-upon maid who, having carried out endless chores — serving tea, arranging
wedding bunting — threw caution to the wind and, in the closing moments,
accepted Trofonio’s invitation into the Time-machine. The Tardis can
transport its occupants back or forth to any point in time, or to any place.
Bampton Classical Opera’s time-travels to the eighteenth-century have so
often led to valuable operatic discoveries and resurrections; this trip to
Trofonio’s Grotto unearthed some real magic.