Remarkable because it is not the Giuseppe Verdi of his masterpieces, but it is a transitional Verdi who was leaving behind the blood and thunder of political strife to embrace the social tensions brought about by the revolutions of 1848!
Luisa Miller is a play by Friedrich von Schiller premiered in 1784, as was, by the way, Beaumarchais’ Le Mariage de Figaro — speaking of social tensions. Note that only later Schiller’s play was renamed Kabale und Liebe (Intrigue and Love), the title under which it is now obsessively studied as a theatrical masterpiece.
Luisa Miller by Verdi is not a theatrical masterpiece, nor is it even competent theater. Schiller’s dense play was reduced by Verdi’s librettist Salvadore Cammarano (who returns later this SFO season as the librettist of Lucia di Lammermoor) to a series of commonplace operatic situations that are easy to sing about but very hard to construe into a comprehensible story much less constitute a Figaro-like social document.
You do hear the Verdi of Traviata and Rigoletto, even some Boccanegra but mostly you hear the thunder of Nabucco, Attila and Macbeth (or maybe just now it was the conducting). It is music that in itself is foreign to the Verdi’s emerging dramatic interests, enthusiasms hardly supported by this poor libretto. Nonetheless it is Verdi and this a priori makes it great music waiting for a production that might at least try to make it make dramatic sense.
It is an essentially bel canto libretto thus Luisa Miller is about singing. Unfortunately the San Francisco Opera bar was set very high back in 1974 when Luisa was sung by Katia Ricciarelli (a prompter from La Scala was brought in for these performances remarked “che scuola! “ or “what stylish singing” about la Ricciarelli). Furthermore the Rodolfo was the young Luciano Pavarotti. 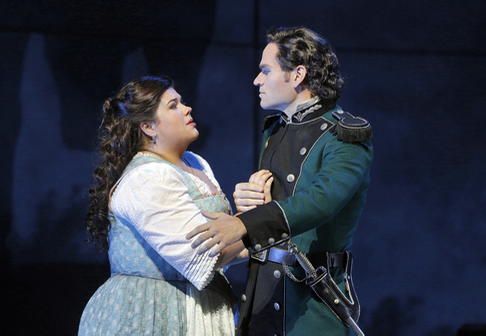 Leah Crocetto as Luisa, Michael Fabbiano as Rodolfo
For this Luisa Miller SFO cast its Verdi soprano prodigal daughter Leah Crocetto who acquitted herself very well and sang a quite beautiful “Tu puniscimi, o Signore.” Miss Crocetto has little spinto (push) therefore little drama in her voice, and I missed the soprano voice sailing over the top of the opera’s almost magnificent finales. Rodolfo aka Carlo was the Met’s prodigal tenor son Michael Fabbiano whose lighter lyric voice makes him choose his Verdi roles carefully. I would have wished for a somewhat larger and richer voice capable of more colors to relieve the vocal monotony of this long role.
Both Mr. Fabbiano and Miss Crocetto are fine, well prepared singers who embellish their performances with lots of acting. Here the acting seemed more like flailing as there was no apparent context. Ukrainian baritone Vitaliy Bilyy was Miller, Luisa’s father (in Schiller he is a musician, in Verdi an old soldier). Mr. Bilyy too is a quite fine singer who did only what he is supposed to do — sing! He offered little musical or dramatic personality, nor was any evidently expected or needed in this production.
Bass Andrea Silvestrelli sang Wurm who along with baritone Daniel Sumegi as Count Walter were the villains of the opera. Mr. Silvestrelli’s black colored voice and threatening presence have established him as the perfect Sparafucile (Rigoletto). As a bel canto villain I would have wished for a smoother, more beautiful voice. Russian mezzo-soprano Ekaterina Semechuk was the villainess Federica, the production itself made little demand of her and musically she was trounced by the conducting.
San Francisco Opera music director Nicola Luisotti was in the pit imposing his usual extreme tempos. He gave no freedom to his singers for stylistic expansion, thus he was free to drive his musical points, points that were in fact seldom singerly. As usual his finales were noisily magnificent, but by then it was hard to care. 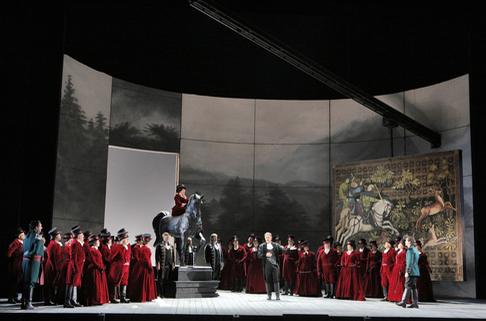 Production by Francesca Zambello, Set design by Michael Yeargan
San Francisco Opera revived the fifteen year old production (2000) created by Francesca Zambello and designer Michael Yeargan. Both Mme. Zambello and Mr. Yeargan have had long careers in which they have perused virtually every passing fashion to the degree that it is hard to identify an individual style for either of them.
In the case of this Luisa Miller designer Yeargan created a hard edged, highly artificial environment in which Verdi attempts to challenge long established social mores. It is hard to know if the long, thin aluminum truss thrust towards the audience was the rigid arm of an antiquated social structure, or what. It is hard to know if the vertical and horizontal separations effected from time to time in the cyclorama were fissures that portended change, or what. The horse? It was all lovely to look at, but Luisa Miller is hardly a lovely opera.
Michael Milenski