The other is a setting of an episode from the epic Indian poem, the
Mah?bh?rata, in which a wife defies Death and restores her husband
to life. At first glance, the two works which formed British Youth Opera’s
imaginative double bill of early-twentieth century one-act English operas
appear to be geographically and thematically disparate. However, as director
Rodula Gaitanou’s thoughtful productions elucidated, they are bound together
by their explorations of death and grief within specific cultural contexts.

Moreover, both operas possess little dramatic development and rely
considerably on setting, lighting, design, movement and stage-craft to
communicate their ‘message’ with power and clarity to the audience. Set
designer Simon Bejer and, especially, lighting designer David Howe made
significant and impressive contributions to each of these productions. 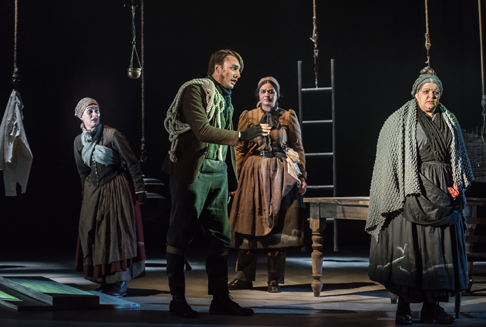 A scene from Riders to the Sea

Riders to the Sea — written in 1927 and first performed 10 years
later —is a sort of Irish predecessor to Peter Grimes: while
Britten’s ambiguous fisherman does not have a parallel in Synge’s depiction
of a west coast town which is simultaneously beholden to the fitful generosity
of the Atlantic and helplessly exposed to the ocean’s natural violence,
Britten’s desire (expressed in his written Introduction to Peter
Grimes) to, ‘express my awareness of the perpetual struggle of men and
women whose livelihood depends on the sea’ is embodied in the desperation,
desolation and melancholy — and ultimate resignation — of Synge’s
beleaguered characters.

It is no surprise that the composer of the Pastoral Symphony and
Sinfonia antartica was drawn to the tragic tale of man’s battle for
survival in the face of a hostile Nature; nor that, as a Christian humanist,
Vaughan Williams was struck by the resignation and faith of those who believe
that there can be, and should be, no resistance against a God who is ultimately
benevolent.

Riders to the Sea was based on stories that Synge had collected
when living in the Aran Islands, to whence he had ‘retreated’ in order to
nurture his commitment to an Irish regeneration based upon creativity and
culture, rather than politics and violent protest. Maurya, a fisherman’s widow,
is the central consciousness of the play, and of Vaughan Williams’ opera. It
is her tragedy: the sea has taken her father-in law, her husband and four sons
from her; now a fifth, Michael, is missing and her youngest son, Bartleby,
attracted by the appeal of the Connemara fair, wishes to travel to Galway by
boat. Maurya pleads with him, with harsh words, to remain; when he refuses,
Mauyra in convinced by her daughter Cathleen that she should ensure Bartleby
parts on good terms with his family, but before Maurya can now give her
blessing she is afflicted by a terrible dream in which Bartleby rides away
shadowed by Michael on a grey pony, and she is convinced that this is a portent
of tragedy. Sure enough, news soon comes of Michael’s drowning and of
Bartleby’s fatal fall. Now, she has nothing more to lose; she is safe from
the sea’s hunger and anger, and adopts a stoic resignation to her
heart-breaking misfortunes. 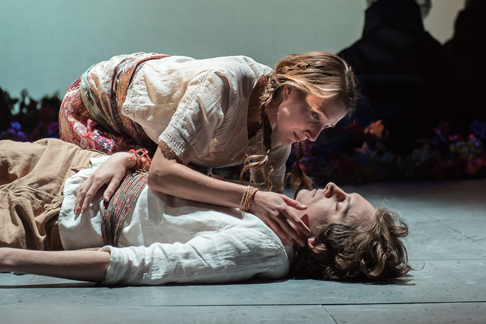 Simon Bejer’s set communicated much through economical means, giving us
both a naturalistic domestic world — a sparse home, equipped with spinning
wheel, wooden table and, hanging from ropes which intimated the coastal locale,
a stove, bucket, shirt, muslin bag — and a dream-like vision of the sea’s
dark depths, with Maurya’s lost men-folk seated, facing outwards, around a
circular bench, bound by the nets that they are mending. David Howe illuminated
the dual world from above, shining spots — like search-lights — down into
the blue-green deep, creating eerie dapples and shadows, and suggesting the
exposure of the community to higher ‘powers’.

Claire Barnett-Jones was terrific as Maurya. With her first entry, the
contrast between her focused yet soulful contralto and the soprano voices of
her daughters, Cathleen and Nora, was telling. Vaughan Williams sets Synge’s
words in declamatory fashion, following the intonation and inflections of the
playwright’s Hiberno-English meticulously (Synge employed the English dialect
of Ireland, to reinforce its literary potential) but this can result in limited
melodic character and monotony, and make it difficult (particularly so in the
absence of sur-titles to discern the details of the text).

However, Barnett-Jones’ declamation was grave and transfixing, taking us
compellingly through the inexorable journey, and submission, to death; she
sustained the vocal and dramatic intensity through her long monologues, and her
words upon the death of Bartleby —‘May the Almighty God have mercy on
Bartley’s soul … and on the soul of everyone left living in the world’ —
were shocking in their candid acceptance of fate and passive forbearing.
Barnett-Jones makes her Wigmore Hall debut next year, and is clearly a young
singer to watch. As her daughters, Josephine Goddard (Cathleen) and Harriet
Eyley (Nora) completed the household of feminine suffering; Eyley in particular
demonstrated an appealing brightness and vigour. These soloists were
complemented by a strong female chorus whose wordless prayer of mourning was
moving. Huw Montague Rendall was the sole male soloist and though his baritone
was a little ‘raw’ this was perhaps not dramatically inappropriate and his
Bartleby was a haunting presence. 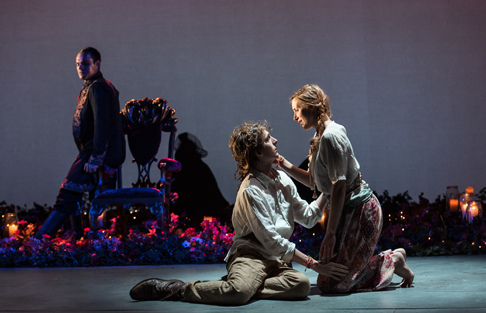 The trouble with Riders to the Sea, though is that Vaughan
Williams’ respectful — overly reverential? — approach to Synge’s text
means that it is not the music that defines the ‘meaning’ of the opera.
Synge’s text calls the tune, and the music further applies the brakes: the
melodic lines can seem as lacking in life as Maurya’s deceased menfolk.
Musically, only Maurya is ‘three-dimensional’, and powerful stagecraft is
need if the drama, rather than the emotions felt by Maurya, is to be credibly
recreated. (One can, however, imagine Riders working well on the
radio.) Alongside Howe’s captivating lighting there was some
absorbing stagecraft: the ‘resurrection’ of Michael from the kitchen table
over which his mother and sisters mourn, and his slow walk to take his place
among the circle of drowned kinsmen, were arresting and affecting. But, rather
than create drama from within, Gaitanou often imposed it from without, through
an overly intrusive ‘Sea Machine’ (which the composer did include in the
orchestral forces), for example, and through invasive sobbing at the close.
Silence would surely have been more ‘truthful’.

Conductor Geoffrey Paterson worked hard at the start to communicate the
violent force of the composer’s clashing dissonances, the polyphonic voices
of the instrumentalists of the Southbank Sinfonia speaking penetratingly. But,
Paterson was less successful in the latter stages of the score, where it is the
‘vertical’ shifts and surges of harmony (recalling the Tallis
Fantasia)which should communicate the emotional unrest and agony
of the bereaved, as well as the merciless welling of the sea. 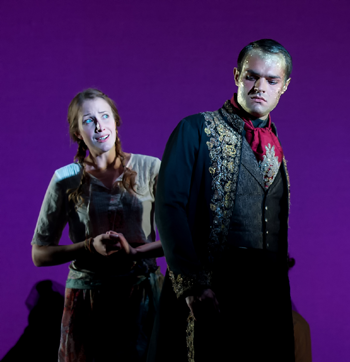 Written between 1908 and 1909, and first performed in 1916, Holst’s
S?vitri lasts just 30 minutes and is written for three singers
supported by a small ensemble of two flutes, cor anglais, double string
quartet, and double-bass. The original Mah?bh?rata tale upon which the opera
is based, effectively reverses Synge’s portrayal of feminine resignation: the
Indian myth tells of the beautiful princess S?vitri’s refusal to accept that
Death should be permitted to take her husband, Satyav?n — a woodcutter and
son of a dispossessed king, whom she has married despite being informed by the
sage Narada that Satyav?n, who is unaware of his fate, has just one year to
live. When the fateful day arrives, Satyav?n falls dead while out cutting
wood: S?vitri challenges Death (Yama), and the latter, recognising her
extraordinary lack of fear of him, grants her five boons, and she tricks Death
thereby enabling her husband to return to life.

Holst set only the central episode, the confrontation with Death. And, at
heart his opera is not really about Death, but rather concerned with Life.
Replying to one of Death’s questions, S?vitri explains that ‘life is
communion, each one that liveth, liveth for all’, continuing ‘life is
eternal’ and ‘urges us on till time and space are forgot and joy and sorrow
are one’ — sentiments which remind us of Holst’s interest in ideologies
of William Morris and of Walt Whitman.

Holst also excised all references to Hinduism, making the story more
universal. Gaitanou and Bejer, however, to some extent restore the specific
cultural and religious context, with warm lighting painting the stage in
swathes of yellow, ochre, orange and maroon — penetrated by dark silhouettes
and shadows — and a carpet of flickering candles placed amid festive flowers,
upon which rests Death’s throne, evoking Diwali, the Festival of Lights.

Holst’s melodic writing is more distinctive and expressive than Vaughan
Williams’ undemonstrative declamation but S?vitri suffers from a
similar absence of sustained dramatic action and momentum. Mezzo soprano Sofia
Larsson sang accurately and cleanly, but lacked the weight and variety of hue
to carry the drama forward. Her confrontations with Matt Buswell’s Death were
engaging however, and she captured S?vitri’s fortitude in the face of
exposure to supra-human forces. Buswell’s control of line and intonation was
a little wayward at times (Death’s music is more harmonically unstable than
the essentially modal clarity of the lovers’ melodies), but he communicated
with directness. Adam Temple-Smith’s appealing tenor emphasised Satyav?n’s
sincerity and vulnerability, and he coped admirably with the high lying
passages, although his diction was not always clear. Geoffrey Paterson again
drew fine playing from the players of the Southbank Sinfonia; solos by the
viola and cello were especially touching.

Hats off to British Youth Opera for these adventurous and brave productions;
they illuminated surprising relationships between the two seldom performed
works and showcased some fine young talent.

Vaughan Williams: Riders to the Sea