To the Camden Roundhouse in Michael Boyd’s staging of Monteverdi’s Orfeo; north of the border for Scottish
Opera’s production of Gluck’s Orfeo ed Euridice; then to the Albert Hall during the Proms season, for more Monteverdi with the
Monteverdi Choir and English Baroque Soloists conducted by Sir John Eliot Gardiner. Orpheus might have made it to the west of England too, had not
ENO’s planned co-production of Orfeo with the Bristol Old Vic in April been withdrawn.

Back in London this autumn, the Little Bulb Theatre bring their take on the Orpheus myth, mingling opera with jazz, to the ROH’s Linbury Theatre; and
in October the ROH will present a co-production of Luigi Rossi’s Orpheus (1647) at Shakespeare’s Globe in the Sam Wanamaker Theatre,
directed by Keith Warner with the Early Opera Company under their director Christian Curnyn. But, from 14th September until 3rd
October, ‘home’ for the archetypal musical charmer is the main stage at the Royal Opera House, where Gardiner returns with his ‘early
music’ ensembles and three internationally renowned soloists to perform Gluck’s Orphée et Eurydice (the 1774 French adaptation of
his 1762 Vienna-premiered Orfeo ed Euridice), in a production directed by John Fulljames, Assistant Director of the ROH, and Israeli choreographer
Hofesh Shechter — the latter dancing his first steps into operatic realms.

Summing up his ‘reform’ ideology in the Preface to Alceste (published in 1769), Gluck made clear his primary concern: ‘I
believed that my greatest labour should be devoted to seeking a beautiful simplicity.’ I’m not sure that ‘simplicity’ is the word
that best encapsulates the result of Fulljames’ and Shechter’s collaboration; there may only be three principals but the stage is populated
with a large cast of singers, dancers and instrumentalists, and movement — up and down, back and forth, ritualistic and riotous — is incessant,
although there is much that communicates with directness and candour. Nor is the composer’s wish ‘to restrict music to its true office of
serving poetry by means of expression and by following the situations of the story’ particularly observed by a stage-mechanism — admittedly an
admirable slick piece of hydraulic engineering and an impressive visual device — which hoists and lowers the players of the English Baroque Soloists,
suggesting heavenly, mortal and Stygian strata (Designs, Conor Murphy), and places the orchestra at the centre of the action, with soloists, chorus and
dancers emerging from above, below and between the supporting pillars of the gliding platform. 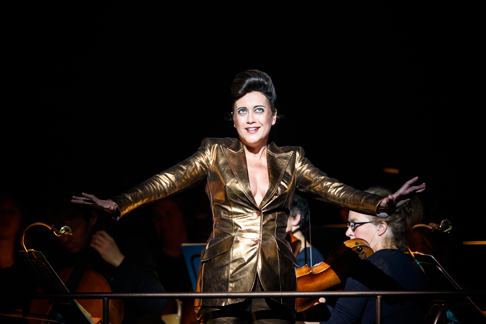 But, if there are surprises and idiosyncrasies — and some anomalous juxtapositions — in this production, there is also much that is compelling,
and nothing that lacks imagination or interest.

In a letter written in February 1773 to the Mercure de France, Gluck declared an ‘intention is to produce a music fit for all nations, and
to let the ridiculous distinctions of national music disappear’ but in adapting, rearranging and re-composing his 1762 version of the Orpheus myth
for the Parisian stage, the composer had a sharp eye on contemporary and traditional French taste. Hence, the incorporation of a substantial number of new
dances and airs, the majority of which were self-borrowings from other, earlier operas.

As Hadean and Elysian Spirits, the dancers of Hofesh Shechter’s company thus have frequent opportunity to enter the story-telling, and they do so
with vigour and astonishing stamina. The choreography blends ritual and poise with wild liberation and feverish anarchy. Thus in the opening scene,
positioned in front of the forces of the Monteverdi Choir, the dancers form a semi-circle of mourners around the wicker, mannequin-effigy of Eurydice,
jerking spasmodically like night-club revellers, in stylised gestures of grief and despair. The mannequin ignites and crumbles, but subsequently
Eurydice’s ‘resurrection’ is celebrated in similar formation, the movements now lyrical and elevating. Elsewhere, the Furies are a mad,
writhing mass of flailing arms and legs, unrestrained head-banging and hysterical leaping — it is difficult to tell if this frenzy is intricately
choreographed or spontaneous. Yet, in both ritual and riot, traditional balletic gestures are recognisable, sufficient to communicate a continuity
stretching from the 18th-century French opera ballet to modern-day choreographic revolutions and radicalism.

The dance element in engaging and only becomes problematic in Act 3. With the swift resolution of the action — a happy ending, of which Gluck himself
remarked, ‘To adapt the fable to the usage of our theatres, I was forced to alter the climax’ — there remains the composer’s
extended ballet-finale which might have pleased Parisians in the late eighteenth-century but which, as presented here, seems superfluous,
dramatically confusing and, in the latter stages, choreographically monotonous. Even the most spasmodic agitation and impulsive thrashing is wearying when
repeated ad infinitum; and, why does a dishevelled solo dancer through himself about the stage, as if in existential agony, like a bedraggled Man Friday on
amphetamines, when ‘Love has triumphed’? No wonder Orphée retreats to the side-lines and rear of the stage, lounging bemusedly. And, why,
since the mortals are re-united, does the effigy reappear and flare up once more. Is Amour only playing games with the lovers’ hearts and hopes? And,
how does this ambiguity sit alongside Gluck’s avowal that, ‘to adapt this fable to our stage, it has been necessary to change the catastrophe
and to add the episode in which Love reunites husband and wife’? 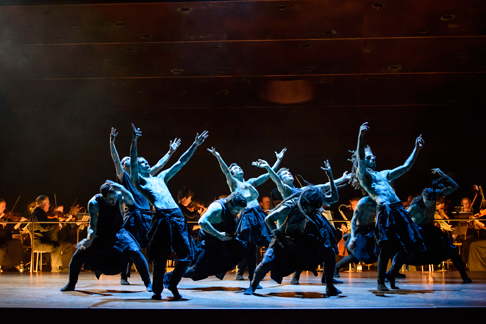 Sung by a castrato in 1762 (or, these days, a mezzo-soprano or contralto), for the Parisian adaptation the role of Orphée was given to a haute-contre tenor. Juan Diego Flórez certainly has the strength and accuracy in the upper register to carry this off, but the unwavering
heroic tone and intense ardency of Flórez’ delivery transform this Orphée from grief-stricken melodist to defiant warrior. To some extent,
this is not entirely the tenor’s fault, as the transference of Orphée’s music to the top of the tenor voice inevitably has a significant
effect on characterisation. But, though his ability to ‘hit the high notes’ is typical and impressive, Flórez seems ‘out of
place’ amid the ‘period’ voices and forces around him. His opening cries, ‘Eurydice!’ rise powerfully above the choral lament
but lack expressive nuance, and as the evening wore on I found Flórez’ tenor increasingly unyielding and somewhat ‘tired’.

Orphée’s bravura da capo aria at the end of act 1, ‘L’espoir renaît dans mon âme’, was indeed a technical tour de force, but to my ears it seemed far from Gluck’s ideal that virtuosity should serve the sentiment of the text and not exist for its
own sake. Overly emphatic and unduly ‘driven’, Flórez sounded more like Werther than Orphée; perhaps it was just a matter of
expectations being challenged, but I found myself longing for the effortless expressive facility demonstrated by countertenor Iestyn Davies in his concert
of Handel arias at the Wigmore Hall the preceding Saturday evening. Similarly, while ‘Che faro?’ has been criticised because of the apparent
disjuncture between the jauntiness of Gluck’s music and the melancholy of the text (‘I have lost my Eurydice/ Nothing equals my sorry’),
in this case it was the sense of vocal triumph and heroism at the close that was disconcerting. Flórez’s acting was also not always convincing,
but in this regard he was not alone: oddly, in a production comprising so much dancing, and in which the Monteverdi Chorus are choreographed to make
imaginative use of the whole stage space, there principals seem to have been given little movement direction and, for the most part, just drift somewhat
aimlessly.

Flórez was, not surprisingly, greeted with adulatory applause at the close, yet I thought that without conventions bel canto gestures to
captivate the listener, the tenor’s tone was too rigid, tense and unadaptable. High and loud, yes; human and lucid, no.

In her role debut, Lucy Crowe used her voice more expressively, conveying Eurydice’s agonizing despair, emotional confusion and, at times, feisty
anger. But, in the duets with Flórez, her light, flexible soprano did not blend well with the tenor’s bold timbre. I thought that it was a
mistake to place Crowe behind the raised orchestra platform, for our first tantalising glimpse of Eurydice, for her voice did not carry; but, subsequently
she characteristically revealed exquisite vocal phrasing and colours. Only her sudden ‘second death’ — a flash of glaring white light
triggers an immediate demise, reminiscent of childhood games, ‘Bang, bang, you’re dead!’ — was less than moving.

Amanda Forsythe (also making a role debut) sang attractively as Amour — full of brightness and character. Dressed in a gold lamé trouser suit
this Love is an insouciant cross between Star Wars’ C-3PO and Linda Carter’s problem-fixing Wonder Woman. Light of heart, irreverent and witty,
this is not quite what Gluck envisaged perhaps, but it is amusingly waggish, carried off with style, and complements the wit of the choreography.

The English Baroque soloists were stirred to surprising forthrightness, rhythmic heft and incisive vigour by John Eliot Gardiner. Gluck’s notion that
the orchestra should be subservient to the needs of the text — ‘the concerted instruments should be introduced in proportion to the interest
and the intensity of the words, and not leave that sharp contrast between the aria and the recitative in the dialogue, so as not … wantonly [to] disturb
the force and heat of the action’ — seemed far from Gardiner’s mind. This orchestra really is at the heart of things. Placed onstage,
seated on a moving platform which is raised and lowered, beneath a tilted ceiling through which Lighting Designer Lee Curran shone angled evocative beams
of white, blue and golden light upon the protagonists, they play a central part in the action. (Stepping into the orchestral pit each night are up to 80
audience members taking advantage of £10 tickets.) The descent into Hades, with its terrors and horrors was marvellously coloured; the three trombones
were elevated behind the orchestra emitting rasping snarls which evoked a terrifying demonic presence. The flute playing, by contrast, in the ‘Dance
of the Blessed Spirits’ was the epitome of celestial grace.

I would suggest that, vocally, the Monteverdi Choir are the stars of the show. The voices blend as one; the tone is full, rounded and dramatically
expressive; their collective movements are both well-rehearsed and naturalistic. They need no gimmicks. For all its unusual and thought-provoking notions
and ‘big-name draws’, the chorus alone make this a show worth seeing.