Director Woody Allen has devised a wonderfully dark comedic point of view
for the Puccini that began the night. Mr. Allen gets us in a laughing mood by
preceding the opera proper with a film clip, rolling production credits for a
50’s black and white movie, which playfully (and shamelessly) incorporate
well-known Italian foods and phrases.

When the curtain rises, it reveals a marvel of a design that carries on the
film noir theme, with all elements in shades of black, white, and gray, mixed
with a few earth colors. Santo Loquasto’s imposing, sprawling set design
features a wrought iron spiral staircase to a balcony level, a kitchen, a
sitting room, and of course, as well as the requisite bed-with-a-corpse. Mr.
Loquasto’s equally effective costumes were by turns characterful, sleek,
sexy, and all perfectly designed to enhance the personality of the character.
York Kennedy’s moody lighting design completed a “look” that could be
somewhat sinister one moment and wittily playful the next.

The show has been expertly staged by Kathleen Smith Belcher with some
contemporary inventions that play against expectations. Lauretta is not the
usual dutiful daughter but rather a sexed up vamp who brandishes a knife before
daddy forcibly disarms her. The knife shows up in another surprise moment that
was perhaps not Puccini’s intention, but it sure created a memorably
different ending. 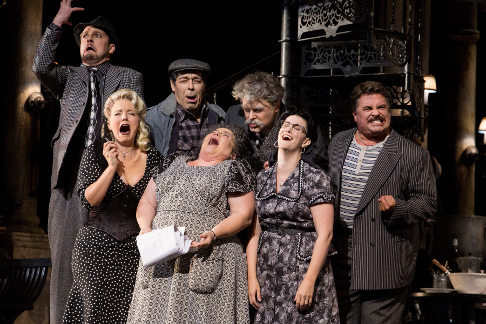 The bickering, calculating relatives were all well drawn, tightly focused,
and commendably specific. Blocking was neatly motivated, character
relationships were clear, and fluid stage pictures provided a satisfying visual
realization. The invention of propping up dead Buoso outside the door as a
sleeping beggar (into whose cup visitors plunked coins) was fresh and clever. I
was less sure about Lauretta and Rinuccio’s overt sexual behavior, especially
their going up to the balcony to disappear on the floor (shagging?) at the end.
It was not only untrue to the parameters of 1950’s film concept, but deprived
the pair of the sweetness that balances the others’ comic malice. Still,
Woody’s concept pleased the capacity audience, and was (mostly) consistent in
its commitment.

The strong cast was evenly matched and completely immersed in effective
ensemble playing. Each took focus when it was their moment, and deferred when
it was not. Meredith Arwady seems to get better and better with my every
encounter, which is to say, her solid contralto is as good as it gets. Her
steely, imperious Zita ruled the roost, and she had many amusing moments as she
cooked in the kitchen almost throughout. Andriana Chuchman was a striking
Lauretta, although her poised, limpid singing of “O mio babbino caro” was
so lovely it seemed a bit at odds with the she-devil impersonation the director
gave her. Sweet-voiced tenor Arturo ChacÛn-Cruz was boyishly appealing and
wonderfully secure. When he started Mr. ChacÛn-Cruz was a mite underpowered
but he grew in stature as the evening progressed, morphing into a heartfelt
performance that was marked by warmth of tone and fine musicality. Liam Bonner
and Peabody Southwell made for an unusually frisky Marco and La Ciesca,
respectively, he singing with burnished tone and she zinging her lines out
there with a ripe, round soprano. Greg Fedderly has developed into a fine
character tenor, and he lavished Gherardo with pointed, ringing phrases. Stacy
Tappan’s delightful Nella was clear-voiced and distinctive. Craig
Colclough’s blustery Simone was sung with great gusto, and Philip Cokorinos
made every moment count as he put his rolling bass to full effect as a hang-dog
Betto di Signa. Young Isaiah Morgan was an audience favorite as the lad
Gherardino, whether belting his lines securely, or getting belted around by his
rather ‘old school’ Italian parents. 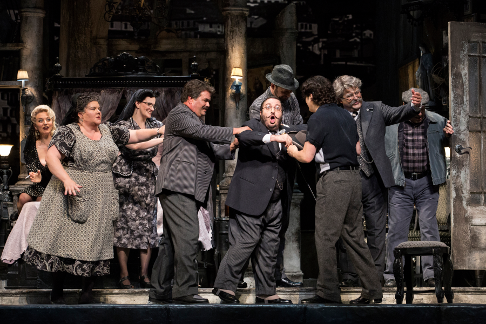 E. Scott Levin was a daffily doddering Maestro Spinelloccio, sporting a
lively baritone deployed with sharp comic timing. Former Young Artists Daniel
Armstrong was entertaining as a blind “witness” Pinellino, and intoned his
few lines with a smooth baritone. Gabriel Varmvulescu chimed in effectively as
Guccio, and best of all, firm-voiced bass (and Young Artist) Kihun Yoon was an
inspired Notary. In the pit, Grant Gershon kept the evening percolating with a
reading that found just the right balance of forward motion, comic accents, and
veristic elasticity. The orchestra played with an assured panache.

One common denominator between the evening’s two one-act operas is the
decidedly “uncommon” Pl·cido Domingo. Mr. Domingo is a remarkable
phenomenon, like no one else in the entire history of the operatic art form. In
addition to his celebrated career as one of the greatest tenors in history,
with countless “firsts” and “mosts” and “bests” in its footnotes,
the impresario heads LA Opera itself, conducts performances with regularity,
operates one of the world’s most prestigious singing contests, and oh yes, is
still singing opera at 74 years young in the baritone “Fach.” 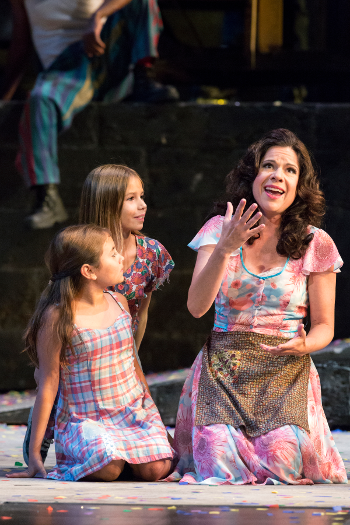 Small wonder that the adoring public cheers his every appearance — first
as the title role in Schicchi and then as the Maestro in the pit for
Pagliacci. Pl·cido Domingo is an unparalleled factotum, the likes of
which has never been seen before and will surely never be seen again. His local
public knows that he IS Los Angeles Opera, and they rightly celebrate him
accordingly. His is a remarkable package of achievements including a remarkable
career as one of the finest singers of his generation.

As Schicchi, he sang intelligently, musically, and with good comic delivery.
He did the bass-baritone role very competently, but . . .as a tenor with a
decent baritonal tint to his core voice. Did he eclipse (or even challenge) the
likes of a Bryn or Sherrill or Cornell in the part? No. On the podium, Maestro
Domingo was clean and well organized, and he kept things moving along with good
rhythmic pulse. But there were subtle occasions when he seemed out of touch
with his Canio, perhaps helming certain phrases as he used to sing them rather
than as a collaborative effort with the artist on stage. Did he challenge the
conducting accomplishments of a Jimmy or Riccardo or Lenny? No.

And therein lies a conundrum. While his other achievements are uniquely
remarkable, his “baritone” and his conducting, while pleasantly agreeable,
are not in the same league as the rest of his legend. But only he can decide
when being a living legend is simply enough, especially when his public keeps
coming back for more. 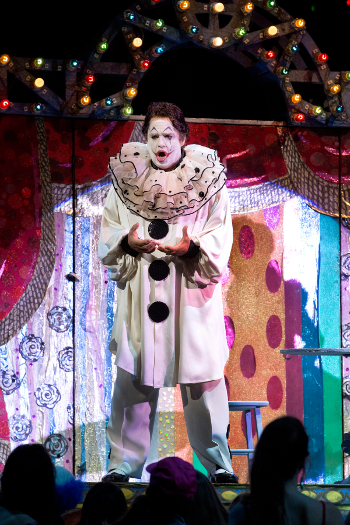 Pagliacci was an over-the-top, eye-filling Franco Zeffirelli
production that rivaled Cecil B. DeMille for its Hollywood overstatement. It
was nothing if not colorful, bustling, and crowded with mini-dramas and
character details that extended down to the last chorister. The trouble is,
while Mr. DeMille could focus in on the key characters and isolate important
moments with a close-up, stage director Stefano Trespidi could not figure out
how to direct our attention to the important players at key exchanges. His
creed seems to be: “Nothing exceeds like excess.”

Even with the “performance stage” erected stage right, and the thrice
familiar drama being played out upon it, there was so much bustle from
extraneous street performers that the visual effect was distracting at best,
and damaging at worst. Ironically, the gyrating, frenetic extras were urging
the “spectators” to look at the stage all the while they completely stole
focus from our doing just that.

Ana Maria Martinez was an ideal Nedda, her urgent soprano showing real
urgency and passion. Full-bodied in all registers, Ms. Martinez especially
shone above the staff where her gleaming delivery gave much pleasure. Her
“Stridono lass˘” was a lovely outpouring of longing and lush tone. Too bad
then that she was largely upstaged by milling town folk, and had to hold hands
with, and sing her thoughts to a group of school girls. 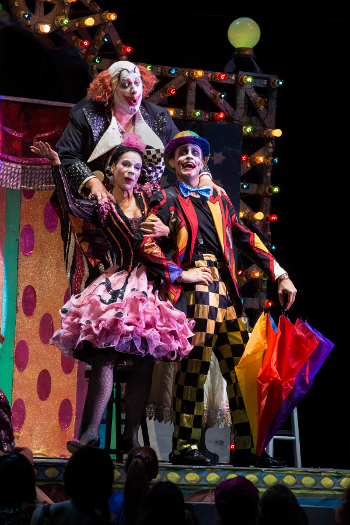 George Gagnidze (top) as Tonio, with Ana Maria Martinez as Nedda and Brenton Ryan as Beppe

George Gagnidze was in fine form as Tonio, firm of voice, and unctuous of
delivery. His prologue was commanding if a bit calculated. In the opera proper
Mr. Gagnidze found more spontaneity and color in the more conniving and
lecherous statements of his character. Liam Bonner was all that could be
desired as Silvio, tall and handsome, and possessed of a mellifluous lyric
baritone with persuasive warmth.

Young Artist Brenton Ryan’s Beppe found his vocal stride in a beautifully
judged serenade. Earlier, he took time to warm to his task and was a little
light in vocal presence.

Of course, Pagliacci is nothing without a potent Canio, and LAO was
very fortunate in its leading man Marco Berti. Mr. Berti knows every nuance in
this iconic role and his substantial tenor has an ideal heft and ring. If the
tenor sometimes pushes his pitch sharp, and sometimes overdoes sobbing
portamento effects, he nevertheless captured the empathy of the audience.
“Vesti la giubba” was the rich emotional journey it need to be, and Marco
knew just how to make each syllable count, prompting enthusiastic audience
response. But did they need to beak the spellbinding illusion Berti created by
giving him an out-of-character bow in front of the curtain right after it?

But really, that sums up this Pagliacci: satisfying singing that
succeeded in spite of a whole list of questionable staging choices that kept
yanking us away from the honest emotion and the tragic interaction of some
highly gifted performers.