Today most performances of La Vestale take place in French-speaking
countries, with profound consequences. The opera is no longer sung in Italian,
but in the original French. In contrast to the thrilling dramatic voices listed
above, singers today typically possess lighter and thinner voices, as well as
stylistic sensibilities, shaped by the Baroque opera movement. The same goes
for the weight of the orchestral sound. Historians of music often treat this
work as a transitional work: mid-20th century performances bring to
mind the new romanticism of Berlioz and Wagner, which it influenced, while
contemporary performances recall the classical tradition of tregÈdie
lyrique Spontini inherited from Gluck and Cherubini. Finally, older
performances (Visconti aside) tended to focus almost exclusively on orchestral
drama and vocal virtuosity, whereas recent performances place more weight on
the originality of the production, direction and design concepts.

This production presented by Opera La Monnaie in Brussels, co-produced with
the ThÈ‚tre des
Champs-…lysÈes in Paris (where a different cast was heard in 2013),
illustrates this shift. It starts well. The Brussels players, sounding lively
and textured under Baroque and bel canto specialist Alessandro de Marchi, make
much of the overture’s famous orchestral effects. As for the singers, a case
can be made that lighter voices and French language bring more immediacy and
elegance to sung lines than Callas and Corelli.

Still, one cannot help wondering if the voices Brussels has chosen are
entirely appropriate to the historical circumstances and style of this opera.
La vestale was celebrated in its own time for its grandeur and
heroism, which appeared appropriate to Napoleon’s empire. It was also written
at a time when French opera still employed forceful, declamatory style, just
prior to the transition to the purer and lighter Italian bel canto
style. It is no surprise, then, that in Brussels the larger, heavier and lowest
voices make the greatest impact.

The vocal star of the evening is the mezzo Sylvie Brunet-Grupposo as La
Grande Vestale. This is a young singer to watch in coming years as she assumes
more big roles in major houses. Her large and resonant (yet focused) voice
refracts wonderful colors across a seemingly limitless “falcon” range.
Compelling musical expression and clear diction bring to life Spontini’s long
vocal lines and the maternal instincts of the head priestess. Bass Jean Teitgen
is also impressive, singing with lean and elegant power, as well as fine
diction—overall combining restraint and authority in a way suited to a
Soverain Pontife. Both would be impressive in any era.

Elsewhere the cast is more problematic. The casting of Licinius exemplifies
how times have changed. In the 1950s La Scala chose the dramatic tenor Franco
Corelli, who knows how to make an appropriately heroic entry when it
matters—e.g. at the start of Act 3. Today Monnaie chooses high baritone Yann
Beuron, a French Baroque and Mozart specialist for whom even recent forays into
Debussy have proven a bit heavy. Beuron sings correctly, evenly, and with a
certain aristocratic plausibility, but he often seems overpowered by a role in
which Spontini’s contemporaries had little difficulty recognizing Napoleon.
Julien Dran similarly tones down Cinna, Lucinius’s tenor sidekick, to a
pleasant tenorino, light and a bit dry.

This leaves the French-Canadian soprano Alexandra Deshorties as the
ill-behaved virgin at the center of the plot. Deshorties possesses neither a
classically sculpted voice, nor aristocratic charm one might expect. Her high
notes are intermittently strident at forte, which she often works around by
singing high phrases pianissimo, sometimes quite incongruously. She can thus be
disappointing in roles that require vocal consistency: Konstanze in
Entf¸hrung, for example. Yet she possesses a mid-weight soprano with
a visceral edge, a body and face with strikingly angular and animated features,
and fearless commitment to musical-dramatic expression. In the right roles,
which include early 19th century heroines such as Medea ,
her vocal and dramatic qualities can ignite into a thrilling intensity
that is more than the sum of the parts.

This does not quite occur here: her assumption of Julia is solid but
something of a cypher. She is most effective when sustaining long and relaxed
legato lines in the middle of the voice at modest volume—as in the Act 3
duet—but the role does not contain enough opportunities for this. Elsewhere,
however, sustained singing varied vocal ranges, expressions and dynamics,
especially in the big arias, lead her to fragment Spontini’s nobly vocal
arcs, which sometimes extend for more than a minute. Combined with a tendency
to bail out to pianissimi on culminating high notes, this deflates the tension
of long scenes, such as Julia’s Act 2 aria,“Toi que j’implore avec
affroi.” On top of it all, she wears a mike, the purpose of which is unclear
to me. 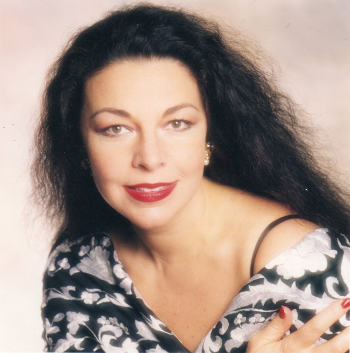 Then there is the matter of the production. Eric Lacascade, a French stage
director, has had his ups and downs in France, and this is his first operatic
effort. It shows. As is often the case these days, this production dilutes and
diffuses a promising concept through mediocre and ill-considered choices. The
basic idea is promising: the opera reenacting a timeless ritual of purification
in an amphitheater. This concept is well-suited to the plot of the opera and
the Gluckian rigor of the score. Often referred to as a poor-man’s Norma
with a happy ending, it tells of Julia, a Roman vestal virgin,
who sullies herself one night with Licinius, a heroic Roman soldier, and
thereby neglects the eternal flame, which dies out. Condemned to die by
entombment, she is reprieved when a strike of divine lightning rekindles the
flame. The score is full of self-sacrificing monologues, solemn choruses, pleas
to the gods, and curses by angry priests, most written in a spartan,
declaratory manner.

The minimalist sets are appropriate to this concept. The stage is almost
empty, without any architectural elements to signal time and place. Much of the
action takes place on or around a small raised platform in the center, on which
are placed the eternal flame in Act II and a cage for Julia in Act III. The
costumes are just right: men and women dressed in identical, quasi-religious
clothing of black and white, or muted blue and rust. Even laypeople and
soldiers blend in, even if the latter, in cheap black leather sleeveless vests
with matching wrist bands, are Hollywood B adventure movie material. This
approach also makes the most of the space: with the ThÈ‚tre de la Monnaie under
renovation, the performances take place at the Cirque-Royale, a large, steeply
raked circular space.

If the production team had stopped there and focused on Spontini’s music,
which few listeners have ever heard live, the immersion in ancient solemnity
and spectacle might make for a moving evening. Yet any prospect of this is
undermined by numberless fussy and thoughtless details. This is a widespread
problem in the opera world, which has been overrun by inexperienced theater
directors who do not really grasp the genre. Perhaps the most common error is
to direct singers to move and make gestures constantly, as if they were spoken
actors. This further encourages the production staff to clutter the stage with
irrelevant little objects as justification for the singers’ wandering
attention and random actions. In doing so, what directors miss is that operatic
music itself provides movement in another dimension, usually rendering it
unnecessary to add physical movement. Occasionally physical Often they are
distracting, and sometimes they points that run entirely counter to the score
and libretto.

La Vestale is particularly vulnerable to such irrelevant and
ill-conceived clutter, because is comprised of urgent, long-phrased,
high-minded declarations. Julia’s big Act II aria, for example, has its own
musical architecture: an earnest lament to the Gods followed by a desperate
cabaletta of internal monologue. Yet Deshortes is obliged to get up and kneel
down repeatedly, to move aimlessly across the stage, and, at the climax, to
repeatedly pick up and put down candles—as if to remind us at the moment
where her inner turmoil boils over that she is a novice in her first day of
employment with some cleaning around the temple to get done. Similarly, the
director willfully distracts the audience from Spontini’s orchestral
introduction to Act III, sending two priests wandering out to solemnly inspect
the bare stage, direct the placement of a couple of benches, and leave. What is
lost is demonstrated by an exception that proves the rule: the most sublime
moment of the evening is the Act III duet, sung entirely with Julia resting her
head in the Grande Vestale’s lap, motionless the classic pose of daughter and
mother.

These are examples of crude and thoughtless self-indulgence, but the
directorial dilettantism goes further, undermining the central thrust of the
opera. In the final scene, the sacred fire is relit not by divine lightning,
but by a match surreptitiously tossed by a townswoman. This is inconsistent
even with the director’s own concepts up to that point, which stress (among
other things) an undercurrent of male priests oppressing female vestal virgins.
In a more rigorous realization, the vestal virgins as a group, or perhaps even
the Grande Vestale herself, would have relit the flame, since for them (both
libretto and common sense make clear) the conflict between religious belief and
gender solidarity is acute and constitutive of a changed sense of identity.

But even more is at stake here. This cute but anachronistic touch of irony
distorts the deeper central theme of this opera, which is not, as this director
seems to think, that religion is a fraud designed by and for hypocrites.
Rather, it is that religious and secular virtues conflict in ways that human
institutions can only imperfectly resolve, and thus they must change. Richard
Wagner was influenced by Spontini, and throughout his work he considered this
clash of religious and secular life the central issue in his stage works, most
notably Tannh‰user and Parsifal but also the Ring.
Wagner was a Feuerbachian, so surely he did not believe in divine
lighting, yet his attitude toward the reenactment of beliefs and myths
(e.g. divine lightning) is far less dismissive and superficial than that of
Lacascade. For Wagner, sacred myth is not simply oppressive hypocrisy, but an
essential component of human existence; its transformation is therefore always
moving, whether in a tragic or a celebratory sense.

In order to make human sense of the plot, it is thus essential that the Act
3 lightning strike be overpoweringly impressive, for it must instantly trigger
in all observers, even the vestal virgins themselves, a sincere and genuine
change in their perception of divine law (“Le ciel…manifeste ses
volentÈ!”) To portray this profound reevaluation as the result of a cheap
trick is to trivialize the plot. In the moment, it seems ridiculous that
priests and everyone else should alter their entire society because someone
tossed match. It renders the plot up to that moment inconsistent, notably the
fact that every character—but most notably Julia herself, in each of her big
arias, but also — struggles sincerely and seriously with the role of
religious belief. And it distorts the clear arc of the libretto, which traces
the dissolution and reconstitution of a harmonious community. The final minutes
of Spontini’s score brilliantly portray the intense outpouring of joy and
relief from everyone, priests included, at the reestablishment of new communal
values.