It was a remount of the Jun Kaneko production (a visual artist based in Omaha) that premiered only three and one half years ago (June 2012). All of us think that is way too soon for a repeat in an annual opera season of but nine operas. Back in 2012 the production boasted a plausible cast and conductor (see The Magic Flute in San Francisco) and was a qualified success.
Now, 2015, with the exception of veterans Monostotos Greg Fedderly and Queen of the Night Albina Shagimuratova (the usual minimal number of star turns San Francisco Opera deems necessary) it was a cast of promising young singers, some more promising than others, and some of little or no promise. At the performance I attended Mlle. Shagimuratova was said to be ill. Her replacement was a masters degree student at Florida State University, a touch that made the performance seem even more like a college workshop production.
Note that the very next night Mlle. Shagimuratova, a well known and experienced Lucia, replaced ingenue soprano Nadine Sierra for the final performance of that opera.
Make no mistake, there were some fine, youthful singers. However these were not performances by finished artists, evident not only in the voices but also in the stage comportment. This made what was perfunctory and clumsy staging seem amateurish.
The conductor was veteran maestro Lawrence Foster, now a regular in the south of France (Monaco, Marseille, Montpellier). His broadly orchestral reading was at odds not only with current Mozart performance practice but also with the expectations of these young singers, evident in the many stressed moments between pit and stage.
Note that both Mlle. Shagimuratova and Mr. Fedderly performed the same roles in 2012. It would have been interesting to observe other interpreters of these roles. 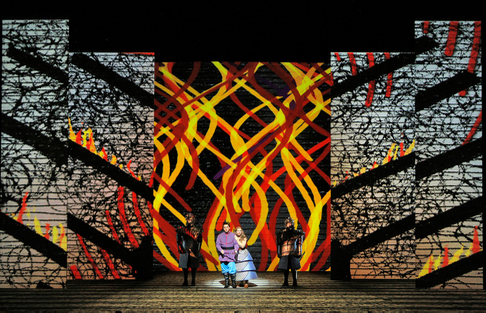 Paul Appleby as Tamino, Sarah Shafer as Pamina and the two Armored Men
The colorful, visual art (as opposed to theatrical) production was charming three years ago. Without the patina of slick performances from the stage and pit the constant visual stimulation of lines and colors was irritating rather than illuminating. The famous German libretto by Emanuel Schikaneder was rendered again in hokey contemporary American terms by San Francisco Opera General Director David Gockley, goosed up for this revival with even more topical references and jokes.
San Francisco’s opera audience deserves better. New audiences attracted to the opera house by this famous masterwork do know the difference. Just ask my neighbors.
San Francisco’s once venerable opera company has much catching up to do to again consider itself world class.
Michael Milenski