One genre is a hybrid, multifaceted art form in
which practitioners from diverse artistic and technical disciplines work together, and which communicates to its audiences by means of voice, music, text,
movement, and visual and spatial design. It is performed, these days, in venues ranging from pub basements, converted warehouses to lavish opera houses,
and, when transmitted live from grand international house, is experienced by audiences of hundreds of thousands of cinema-goers. The other is a symbiotic
fusion of word and music, performed by a singer and accompanist in inter-dependent partnership in, most commonly, intimate halls to a few hundred, or less,
focused concert-goers.

And yet in a recent article[1], John Gilhooly, the Director of the Wigmore Hall, raised several issues which
suggest that because lieder and opera vie for the same limited funding, promotion and audiences, the art forms find themselves in, if not an oppositional,
then certainly an uneasy relationship.

Despite Gilhooly’s description of the song recital as an ‘endangered species’, the Wigmore Hall itself is a bastion of art song,
staunchly defending its value and ensuring its longevity through the Hall’s committed and adventurous programming. But, one doesn’t have to
travel too far outside the capital to find another celebrated sanctuary: the Oxford Lieder Festival, now in its 14th year, runs from 16 th to 31st October in 2015, and, according to the festival’s founder Sholto Kynoch, it too has a mission to promote what is
perceived to be the neglected genre of lieder and art song. 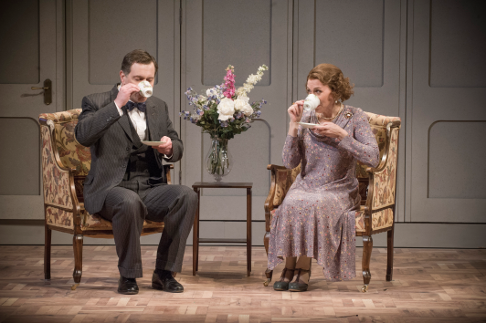 So, it seemed fitting that earlier this week I found myself sitting in the restaurant at the Wigmore Hall with baritone Mark Stone, discussing opera,
lieder and his own forthcoming recital at the Oxford Lieder Festival in which – with tenors Robert Murray and Joshua Elliot, pianist Graham Johnson,
and actor Simon Callow – he will celebrate the A.E. Housman’s collection A Shropshire Lad, with readings interspersed with musical
settings by Butterworth, Orr, Ireland, Moeran and others.

I began by asking Stone if he agreed with the doom-mongers – whose claims Gilhooly refutes in his article – that ‘the song recital is
living on borrowed time’, with ‘patching programming at leading concert venues’ and ‘ageing audiences’ inevitably signalling
the decline of the idiom, in the light of the general public’s ‘narrowing attention spans’ which make ‘deep listening to refined
settings of poetic texts’ a challenge too far for many. Stone acknowledge the problems for art song, first in economic terms. Given the small size of
most lieder venues, managements may often be under pressure to bring in an opera ‘star’ whose name will ensure a full house paying inflated
ticket prices, leading to, as Gilhooly notes, promoters scheduling ‘eight song concerts a year, four of which are given by opera singers who rarely
perform recitals and habitually take to the stage with underprepared programmes’. But, Stone looked at the issue from the other side too: a big-name
diva would inevitably be paid far less for a single lieder recital in comparison to the fee received for a long run in the opera house, and so it might be
understandable, if not acceptable, if they felt less inclined to devote as much time to the repertoire.

As for the challenges for audiences, Stone admits that these can be considerable, especially if the genre is unfamiliar. Audiences have to work hard to
understand and enjoy a song: they have to listen intently to a text, perhaps in a language not their own, and can’t just sit back and let the music
‘wash over’ them. There’s nowhere to hide in a small venue, and they can feel as much a part of the performance as the singer. It can be
difficult too, even for regular lieder attendees, to both follow a text, especially a translation, and simultaneously listen in a sustained way. The
processes of listening can get in the way of the ‘experience’ of the song. But, the rewards for trying are immense, and Stone has found that
those who are not moved, affected, uplifted and inspired by art song recitals – even if they are novices – are rare. It’s important that
we don’t pander to the lowest common denominator, and sink back gently into the hammock, dieting on easy-listening, popularist fare, but that we ask
something of ourselves as listeners.

And, for the performer, too, lieder recitals make particular and not inconsiderable demands. First, in contrast to a month of more of rehearsals in the
opera house, the lieder singer may have just a couple of rehearsals with his or her accompanist. And, the size of venue is as significant a factor for
performer as for listener: intimate settings instigate and require intense relationships between singer and audience – the singer may even feel that
he or she is forming an individual relationship with each listener – and these must be sustained, not just through musical expression but also
through eye contact. A singer can be sensitive to any movements or changes of mood among the audience in a way that is not the case in a large concert hall
or opera house, where both performers and audiences are to some extent ‘protected’ by the distance between them. Stone tells of an occasion
when, aware of a slight tension to one side of a small hall, he wondered what was wrong and whether there might be some dissatisfaction with his
performance, only for an explosive sneeze to burst forth from the fidgeting listener! But, there are advantages of this intimacy too: one can modulate and
manipulate one’s voice with much more nuance and subtlety than in larger auditoriums; Stone draws a parallel with public speaking, citing the
difference between giving a lecture to a grand hall seating 2000 and speaking to a small gathering of only 50 people. Most of the venues at the Oxford
Lieder Festival are fairly small (the Holywell Music Rooms, for example, a regular venue, seat approximately 200), and thus afford singer and listener the
opportunity to share the experience of the song with concentration.

Then comes the thorny issue of language. Stone himself prefers to perform in English, or rather to perform English songs. He argues that no matter how good
a non-native-speaker’s English may be, it will still not be ‘perfect’, and thus such a singer will not communicate expression and meaning
as directly and truthfully as a native speaker; and, so, the same must be true of English singers performing in foreign tongues. Or, to put it another way,
pronunciation is part of the ‘meaning’. We reflected on how the 19th century was such an important period for the development of the
German language, and the national identity associated with it, in ways which were not true of English at this time. Perhaps such matters account for the
discrepancy in musical and compositional activity and achievement during this period?

Yet, English is an immensely rich language, although it is difficult to pronounce. But, other nations think similarly about their own languages. Stone
recalls performing The Merry Widow in France, in French, and – despite his own anxiety when confronted with the lengthy spoken dialogue
– being reassured after a performance by an audience member’s praise and insistence that he should sing more French opera. Stone’s
intimation that he would like to tackle Pelléas et Mélisande one day led his new ‘fan’ to depart promptly, without comment.
Moreover, audiences are amenable to performances of opera in translation if the original language is Italian or German, but less tolerant of English
translations of Russian or the Scandinavian languages. Interestingly, when Stone’s own recording company – which has released CDs of songs by
Quilter, Ireland, Orr and Havergal Brian among others – issued recordings of songs by Delius, those songs with Scandinavian lyrics were performed in
English translation. How would Stone judge the result? They sound unusual, a little strange. Clearly, there are no unequivocal answers to these issues.

Text and language are at the heart of this year’s Oxford Lieder Festival. After the Herculean presentation of the complete songs by Schubert in 2014,
this year the Festival programme is led by the poets and entitled: ‘Singing Words: the poets and their songs’. Certainly, without poetry there
would be no lieder: Stone remarks that on occasion the poem seems primary – he has sometimes performed a song by, say, Quilter and rejoiced,
‘What a superb poem!’ rather than ‘What a terrific song’. There are also some poetic forms – sonnets for example –
which seem to need no musical representation, adornment or interpretation; indeed they seem to resist such reorientation. If a poem is
‘complete’ in itself, why add another dimension? Then, there are poems that may be assimilated into a composer’s idiom at the expense of
their own identity: some of Finzi’s settings of Thomas Hardy seem to reach to the heart of the poet’s sentiment and meaning, but there are also
songs which set different Hardy texts but which sound, employing as they do Finzi’s idiomatic musical language and voice, alarmingly similar –
despite the fact that although Hardy wrote over 800 poems, never is a form or scheme repeated.

But, despite these knotty problems, the art song seems to represent and articulate something essential about the human condition; it is, as Gilhooly
suggests, ‘more a spiritual necessity than a garden variety of entertainment’. An operatic role is ‘played’ but a song is
‘experienced’ or ‘lived’, by performer and listener alike. Stone comments, somewhat tongue-in-cheek, that an acquaintance once
remarked that when making decisions about repertoire and performances a professional singer might ask, ‘Will it bring pleasure, prestige or
profitability?’ In the case of the art song, though prestige may come to some, it is pleasure that undoubtedly takes precedent over profitability.
We’re back to the economics again. It all comes down to, then, the fact that we need to be prepared to pay for what we value. In fact, both opera and
lieder will eventually die unless we do so.

[1]
‘Don’t let the song recital become an endangered species’ was first published in Classical Music in August 2015 and
re-printed in the programme of a recital given by Ian Bostridge, Steven Isserlis and Julius Drake at the Wigmore Hall on 7 October 2015.