Just such an effort is part of the current season at Lyric Opera of Chicago as led by its music director Sir Andrew Davis and in a production designed by Sir David McVicar. The roles of Wozzeck and Marie are performed by Tomasz Konieczny and Angela Denoke, both making significant debuts in this house. Gerhard Siegel and Brindley Sherratt sing the Captain and the Doctor, roles of authority in Wozzeck’s tormented life. Andres, friend of Wozzeck, and Margret, the neighbor of Marie, are portrayed by David Portillo and Jill Grove; Stefan Vinke is cast as the Drum Major. The roles of the apprentices are taken by Bradley Smoak and Anthony Clark Evans, a Soldier by Alec Carlson, and the Fool by Brenton Ryan. Messrs. Siegel, Vinke, Carlson, and Ryan are singing in their house debuts. Vicki Mortimer and Paule Constable are the Set and Costume as well as the Lighting Designers in this new production. Michael Black has prepared the Chorus and Josephine Lee the Children’s Chorus. 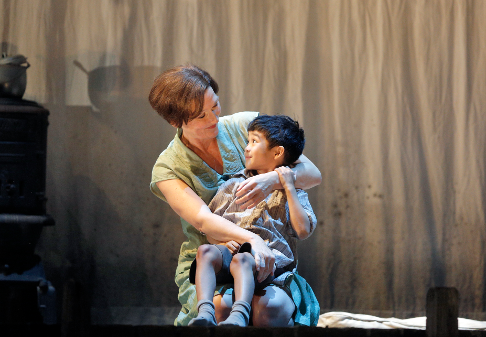