As Dutch National Opera’s most successful export ever, it gets to be the only
revival in the company’s celebratory 50th season. Eighteen
years on, it is still overwhelming.

Musically, this revival is equally worthy of the 1957 masterpiece about the
Carmelite nuns guillotined in 1794 during the Reign of Terror for refusing to
renounce religious life. The Residentie Orkest under Stéphane Denève
was nothing short of inspired. Wind solos wept quietly. The brass section,
crucial in expressing anxiety churning itself into blind terror, distinguished
itself, forgetting the odd rogue note, with honed technique and supreme
control. Mr Denève kept things transparent, in service to the words. He
conducted the interludes with elegant restraint and his graded build-up to the
final horror had the feel of a superior thriller. In fact, Georges
Bernanos’s play was written for the screen, and the opera’s
division into twelve scenes, some of which start in mid-conversation, is partly
why its structure feels so modern and familiar. No doubt Mr Denève’s
pacing was the result of long study, but it came across as instinctive and
uncontrived. 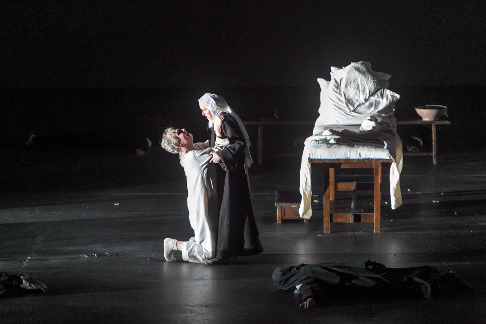 The whole cast, meticulously directed by Mr Carsen, gave theatrically acute
performances, without as much as an eyebrow raised gratuitously. All the
shorter roles were well-sung­. Michael Colvin made a convincing Chaplain.
The women of the Dutch National Opera Chorus were top-notch, joining the
soloists in a refulgent Act II Ave Maria and a note-perfect closing Salve
Regina. Jean-François Lapointe and Stanislas de Barbeyrac as,
respectively, Blanche’s father and brother, were both forceful and
vocally rock-solid. Mr De Barbeyrac’s expressive dynamics made the
Chevalier’s visit to his sister in the convent stand out as one of the
more memorable scenes.

Sally Matthews injected the fearful, hypersensitive Blanche with toe-curling
awkwardness, accentuating her self-hatred rather than her timidity. Vocally,
her middle-to-lower range sounded clotted, but her missile-like top went a long
way towards conveying the panic that has the novice nun in her grip. Michelle
Breedt’s Mother Marie was probably caught on a lesser night. Upward
climbs were marred by skidding and her lower notes did not project freely
enough for this overbearing character. Mother Marie is, after all, the one who
persuades the sisters to take a vow of martyrdom, although she herself is
denied that glory. It would be useless to analyze where Doris Soffel’s
mezzo-soprano tends to shake and spread—her Old Prioress was simply
grand, every word thrumming with meaning, her dying howls terrifying. A frail
woman brimming with tenderness one moment, a vocal tornado railing against God
the next, Ms Soffel’s moribund nun was the stuff of nightmares, and of
great moments at the opera. No less impressive was Sabine Devieilhe as that
pious equivalent of the flibbertigibbet, Sister Constance. She propelled her
laser-sharp soprano with a thrust that far exceeded its size and her text
clarity and physical energy were a complete joy. Making her DNO debut, Adrianne
Pieczonka brought vocal beauty and dignity to the role of Madame Lidoine. Her
highest notes did not always come easily, but her ariosos, wrapped in the
velvet of her luxurious timbre, revealed a deeply touching, motherly
Prioress. 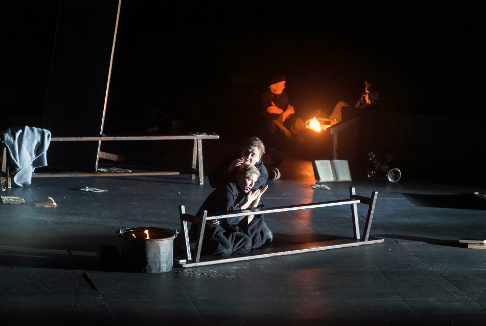 Michelle Breedt as MËre Marie and Sally Matthews as Blanche

Mr Carsen’s production affects with its simplicity, which belies a
wealth of detail. The way the nuns lie face down around Madame de
Croissy’s death bed, for example. It is the same position nuns assume
when taking their vows and here it presages their death, while drawing a
parallel between Blanche’s decision to die with them and her commitment
to the order. Mr Carsen finds true poetry in his subjects, in the draping of
their habits and the tranquil mechanics of their daily chores. As
Poulenc’s music darts in and out of their inner life, Mr Carsen confines
and opens spaces with minimal demarcations, such as spotlights and candles. The
biggest barriers are human: the row of nuns forming a grille between Blanche
and her brother, the angry crowd sweeping across the stage leaving disorder in
its wake. In the end, the safest refuge is also human, not topographical. As
Madame Lidoine says in her prison speech: “No one could take away from us
the freedom that we surrendered with our vows so long ago.” By choosing a
common destiny, the nuns conquer their fear. Despite the savage swipes of the
guillotine, their Salve Regina rises in hopeful phrases. Their final prayer is
an Ascension as well as an execution and staging it as an ethereal dance is
pure genius.

All other photos by Hans van den Bogaard