Wolf-Ferrari is better known today, though, for his series of operas in the
spirit of, or directly derived from, the plays of Carlo Goldoni — the
first of which was Le donne curiose (1903). And, on this occasion,
this battle-of-the-sexes comedy of manners was performed by the opera
students of the Guildhall School of Music and Drama which a responsiveness
to Goldoni’s ‘world’ the equal of the composer’s
own buffa sensibility. 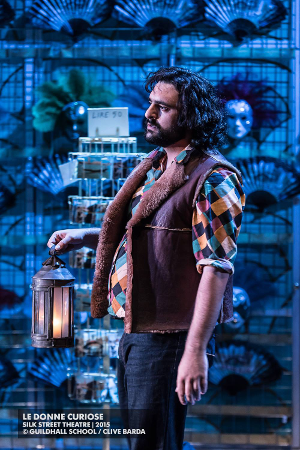 The scenario of Le donne curiose, or ‘The Inquisitive
Women’ (libretto, Luigi Sugana), is somewhat dated, though. A gaggle
of gossiping girls is obsessed by what goes on behind the doors of the
gentleman’s club which is frequented by their husbands and
fiancés. Its strict ‘no women admitted’ policy fuels their
frustration and their imaginations. Beatrice, wife of Ottavio, believes the
club is a gambling den; Lelio’s spouse, Eleonora, is convinced that
the men are indulging in occult practices and alchemy. Rosaura is tormented
by the idea that her betrothed, Florindo, is frequenting a house of ill
repute; Colombina, whose dark glasses and trench-coat suggests that
she’s watched too many episodes of Colombo, is sure
she’s solved the mystery — they are digging for hidden
treasure. Instead, over a pizza and pint, the men are simply seeking peace
from the ladies’ chattering, and congratulating themselves on their
male Amicizia, or friendship — as celebrated in the
club’s slogan. Thus, when the insatiable sinner-seekers connive a way
inside and find their men doing nothing more debauched or outlandish than
sharing the feast that Pantalone has served up to celebrate the imminent
marriage of Florindo and Rosaura, it’s a bit of an anti-climax for
them, and for us. There’s not nearly as much comic business,
particularly in the final Act, as one might expect. When their espionage is
discovered, embarrassment replaces prurience; they beg for forgiveness and
the magnanimous males oblige.

We glide into Venice — the home of the commedia —
down the Grand Canal, courtesy of Dom Baker’s screen-credit video
designs which ingeniously transform Thames Television’s
London-landmark logo into a Venetian waterside vista of palazzi and
vaporetti. (Baker is a student on BA Technical Theatre Arts at GSMD.)
Against this baroque Venetian backdrop, the cast are presented to us in a
series of ‘opening credits’, grinning and preening like
day-time soap-opera stars. This raised guffaws but did distract somewhat
from some stylish playing in the pit during the overture (which was a
shame, as there was good ensemble and some brave playing by the horns).

A tacky souvenir shop is the ‘front’ for the club, the
latter signalled only by the symbolic over-sized key-hole in the centre of
a rear door. Tourists (members of the Guildhall Chorus) wander through to
flick through post-cards and gawp at the Carnival masks and strip
gondoliers’ shirts that hang from the walls. The club interior is a
shrine to boys’ toys — football and fast cars, motorbikes and
music idols: the characters sport an eclectic array of costumes indicating
diverse musical tastes from Frank Zappa to the Bee Gees. There’s a
fantastic coup de theatre in the final Act: as the women jostle
each other to peer through the keyhole, the whole set swivels and in the
blink of an eye outside becomes inside. On the whole, the set is brightly
lit, which makes the dimmer, duskier moments more arresting.
Ottavio’s misery in Act 2, aggravated by the women’s schemes to
get him to remove his jacket so they can filch his keys —
machinations which result in him being doused in wine and catching cold
— initiates darker tones and longer shadows. The aquamarine canal,
which is projected during the Act 3 overture, ripples in the moonlight
evoking nocturnal mystery and romance. 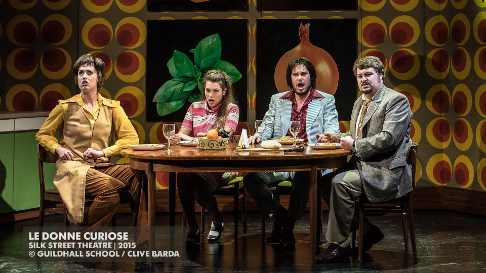 Le donne curiose , with a cast of 17, is a good choice
for a student opera and the young singers here demonstrated strong
and well-balanced vocal and theatrical skills, although some found the most
high-lying passages challenging. The ensemble work was polished and the
honours shared; no one individual dominated the crowd. On the whole, the
singers did not let the farce and foolishness distract them: the
light-hearted routines are slick — and well-matched to the music.

Thomas Atkins’ tenor has an incipient Italianate gleam and he was
a beguiling Florindo, so obviously enamoured of Rosaura and at the mercy of
her emotional mood swings. Looking as if he had strayed from the set of
Saturday Night Fever, Atkins sustained a strong tone through his
arching melodies, and showed impressive stamina in his long aria; but he
also revealed a beautifully dreamy quieter voice. His Rosaura, Nicola Said
demonstrated a creamy tone complemented by a strong low register, and she
commanded attention.

Although the scenario nods in the direction of the eighteenth century,
the opera’s score borrows from closer to home — Verdi’s
Falstaff and Rossini’s Barber of Seville and Daughter of the
Regiment’ are the most obvious fore-runners, although there’s a debt
to Mozart too, and some pastiche in the form of Handelian bravura and a
gondolier’s serenade. The musical idiom is generally through-composed
but at times arioso and conversational exchanges crystallise into discrete
numbers, the best of which are the Act 2 quartet and the beautiful duet for
Florindo and Rosaura, ‘Se in voi cotanto’. During their
expression of devotion the lighting may have been rose-tinted but the
singers conveyed a candour which aroused our own empathy, something which
the opera’s superficiality and foolishness generally banish
elsewhere. The throb in Florindo’s voice was surely genuine.

Bass-baritone David Ireland’s optimistic Ottavio sang with an
easeful flow and grace; Christopher Cull’s tenor had real power and
incisiveness, but the characterisation of Lelio was a little discomforting
— was he a buffoon, an object of ridicule, when, frequently enraged
by his wife, he readily whipped off his belt to thrash her? Or, was he a
reminder of the darker side of marital relations? Swiss bass-baritone Milan
Siljanov (winner of the Wigmore Hall/Kohn Foundation International Song
Competition in September 2015) was superb as Arlecchino, Pantalone’s
side-kick; his big aria doesn’t come until the final Act, but it was
worth the wait. Dominick Felix used his attractive tenor to suggest
Leandro’s happy-go-luckiness. Baritone Josep-Ramon Olivé made an
impact as Pantalone; though in Act 1 he was a trifle over-emphatic, he
modulated Pantalone’s contemptuousness and bitterness
subsequently. 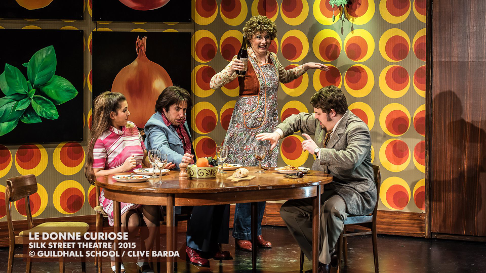 The women formed a well-balanced quartet. Bethan Langford conveyed
Beatrice’s indignant exasperation through both the richness of her
mezzo soprano and the violence that she inflicted on Ottavio’s pasta
supper. In Act 1 I found that Jennifer Witton, as Eleanora, let theatrical
exaggeration (there were shades of Hyacinth Bucket) overpower her vocal
focus; but she quickly re-established her control, and in Act 2 she
delivered elegantly shaped phrases, with soft effortlessness. Katarzyna
Balejko was the instigator of much of the farce — and showed her
comic timing when spilling liquids and swinging doors.
‘Disguised’ is an Italian football fan, sporting the national
kit, this Colombina nevertheless found her way to Arlecchini’s in the
final Act.

Conductor Mark Shanahan ensured that proceedings breezed along
charmingly, but there’s quite a bit of padding in
Wolf-Ferrari’s score and the melodic invention is on the thin side.
That said, there is some imaginative orchestration and Shanahan made sure
that we heard the delicate motifs for bassoon, or other woodwind, and
appreciated the more unusually scored passages, such as the overture to Act
3.

Overall, I’d say that Barlow judged this production perfectly
— excepting one small detail. Wolf-Ferrari never quite attains
Mozartian clarity or matches the comic sincerity of Verdi’s
Falstaff, but there are intimations and echoes: these were swept
aside, however, when the cream pie fight broke out in the closing scenes.
However, Barlow and his cast made a strong case for the theatrical
effectiveness of Le donne curiose and contributed greatly to our
appreciation of its musical charm.