The atmospheres of this famous†short, deeply pseudo-psychological horror story were always present in vivid imagination even though they were seldom present in the War Memorial. The novella†is that powerful. More than an artistic event it became a mental exercise in comparing Getty with Poe, Debussy with Poe and Debussy with Getty and fitting all this into the digital visual overload created by Swiss videographer David Haneke and English stage director David Pountney for the Welsh Opera in 2014.
While the Poe atmospheres oozed in and out of your mind the Getty Usher House, libretto by the composer, elaborated the Poe narrative into a complex plot woven by an evil scheming doctor who easily defeats a Poe sicko, his sick sister and his weird friend. Getty’s music was much like recitative accompaniment though handsomely elaborated. It worked for a while. 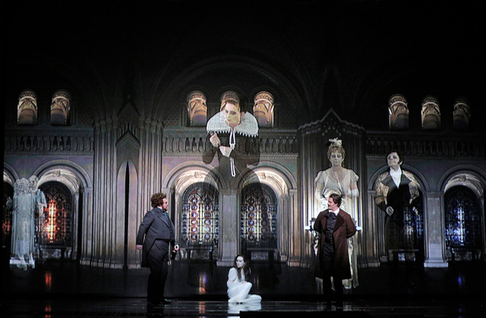 Brian Mulligan as Roderick Usher, Jamielyn Duggan (dancer) as Madeline Usher, Jason Bridges as the friend in Getty’s Usher House
Gordon Getty is better known as a philanthropist of opera than as a composer of opera. Nonetheless Usher House is real music, and the opera was not without some splendid moments, notably the danced scenes.
Debussy on the other hand greatly simplified the Poe narrative for his Chute de la Maison Usher (libretto by the composer), elaborating its atmospheres with the grotto and cave vocabularies of Pelleas et Melisande. But Debussy does not nor could he have†approached†the twisted complexities of the tale’s actors. He does masterfully build some of the House of Usher’s moods, and this alone brought great pleasure.
Debussy abandoned this, his last opera for undocumented reasons, may one surmise he sensed it was not worth finishing. But this mere sketch of an opera by one of the great composers of the early twentieth century makes it therefore of great intrinsic value. British musicologist Robert Orledge completed the opera for Debussy with such understanding and authority that you do not question its impression as pure Debussy.
†† 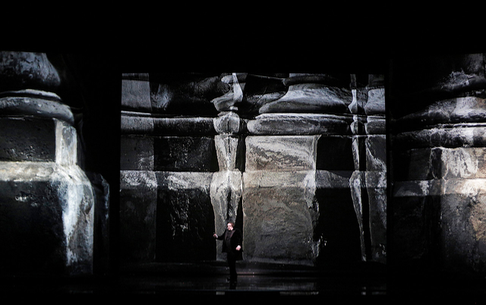 Brian Mulligan as Roderick Usher in Chute de la Maison Usher
Finally though the delicacies of the Poe malaise as respected by Getty and Debussy were bludgeoned by the huge size and overwhelming presences of the House of Usher itself, digital technology gone amuck on three huge screens that dwarfed the players. It is true that the monumental mysteries of the Usher mansion are the protagonist of Poe’s tale but these are felt, sensed mysteries that were not manifest in the huge shapes of the constantly moving, precise particulars of English maybe Scottish gothic castles. There was not a†whiff of Poe’s Boston or Getty’s Savannah, but there was a whole lot of video technology self congratulation.
Baritone Brian Mulligan sang Roderick Usher in both operas — a tour de force well accomplished to say the least. Mr. Mulligan is a fine singer who is inexplicably and relentlessly overexposed to San Francisco audiences. He does not have the artistic stature to hold the stage for most principal roles much less the stature to hold our interest and respect for two and one half hours in this essentially one man show.
Jason Bridges was effective as Roderick’s friend Edgar Alan Poe (the novella’s narrator). The crucial role of the evil Doctor Primus was thrust upon first year Adler Fellow Anthony Reed who possesses a very fine bass voice. The role cried out for personality and presence well beyond the careful studio refinements of an Adler Fellow.
Conductor Lawrence Foster conducted this Robert Orledge completed version of the Debussy at the Bergenz Festival in 2006, perhaps explaining his presence in San Francisco. Within the covered acoustic of the War Memorial the fine SFO orchestra could not project the brighter colors of the Debussy score, colors that might have helped make the evening less dreary artistically.
Michael Milenski

All photos by Cory Weaver, courtesy of San Francisco Opera.