Quite apart from the technical challenges surmounted and
the diversity of musical idioms mastered, Summerfield also proved herself to be
an excellent linguist, moving confidently from German to French, from English
to Finnish, and back to German.

This concert was one of a series of song recitals being given by past
prize-winners of the Kathleen Ferrier Award, which Summerfield won in 2015. She
began with Mendelssohn, whose ‘Hexenlied’ she had performed in the Ferrier
Award Final and which here closed a group of five songs by members of the
Mendelssohn clan. ‘Neue Liebe’ (New Love) was a difficult song with which
to begin, requiring precision and composure from the singer, who presents
Heine’s pondering on the truth of the legend that a mortal who sees the elfin
Queen will either find new love or die. Summerfield swooped and leapt
effortlessly, and with pinpoint accuracy, conveying the protagonist’s concern
that the horns and bells he hears may prove deathly, while Lepper sharply
picked out the sound of pounding hooves. ‘Die Liebende schreibt’ (The
beloved writes) was notable for the gentle phrasing of the vocal line, and the
deep, dark colours with which Summerfield imbued the protagonist’s feelings
of loneliness: ‘Enfernt von dir; entfremdet von den Meinen/ F¸hr ich stets
die Gedanken in die Runde’ (Far from you, estranged from my family, I let my
thoughts rove constantly). Lepper employed subtle rubatos while maintain a
flowing accompaniment, using the bass line to provide guiding direction,
particularly in the piano postlude. In ‘Winterlied’ (Winter song) and
‘Hexenlied’ (Witches’ song), Summerfield showed that she can tell a
compelling tale. The former had a touching pleading quality which grew to
urgency in the second stanza, as the young boy begs his mother to let him
search for his sister outside in the snow and wind. The slightest of pauses
after the line, ‘Der Wind ward still, die Nacht verging’, in the final
verse, was typical of the thoughtful gestures which gave stature and weight to
these small forms. Each verse of the strophic ‘Hexenlied’ was clearly
defined; the catalogue of gothic imagery — broomsticks, goats, dragons and
Beelzebub — took us to the realms of the composer’s A Midsummer
Night’s Dream. Fanny Mendelssohn’s ‘Die Mainacht’ (May night) gave
Summerfield the opportunity to display the glossiness of her gleaming soprano,
which slipped smoothly through the unusual harmonies of the second verse —
‘Suche dunklere Schatten’ (Seek darker shadows); Lepper impressively
negotiated the busy accompaniment, articulating the elaborate figuration
clearly but never overwhelming the voice. 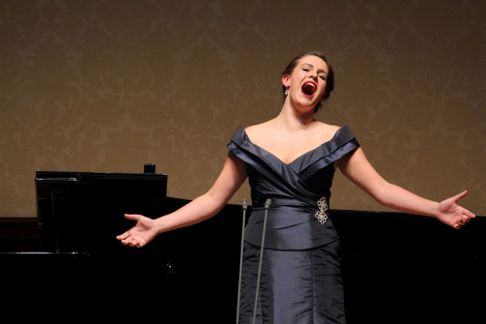 In Debussy’s Ariettes oubliÈes (Forgotten airs) Summerfield
showed a similarly acute sense of the spirit of the text, and an innate feeling
for the evocative idiom. ‘C’est l’extase langoureuse’ (It is languorous
rapture) showcased the soprano’s wonderfully burnished lower range, as she
sank sensuously through the opening phrase; she seemed to relish the chromatic
nuances and descents, particularly in the second stanza, and when the vocal
line rose to its height — ‘Cela ressemble au cri doux/ Que l’herbe
agitÈe expire …’ (It is like the sweet sound/ The ruffled grass gives out
…) — her voice had a thrilling shine, full of passionate feeling.
Lepper’s oscillating semiquavers delicately conjured the falling rain in
‘Il Pleure dans mon coeur’ while Summerfield remained focused during the
recitative-like sighs of the middle part of the song, and as the harmony
wandered through distant tonalities. In contrast, the chords which open
‘L’ombres des arbres’ were weighty and ponderous, suggesting the density
and of the ‘shadows of trees’ in the misty stream. In ‘Chevaux de bois’
(Merry-go-round) Summerfield’s vivacious voice sparkled above Lepper’s
tight trills and whirling arpeggios, and this gave the slowing of the tempo in
the pianissimo final verse a mischievous edge — a frisson which
‘exploded’ in the playful piano postlude. The complex structure of
‘Green’, with its constantly shifting tempos, was well-controlled, and the
final line — low in the voice and accompanied by tender chords — was very
lulling: ‘Et que je dorme un peu puisque vous reposez’ (And let me sleep a
while, since you rest). The final song of the cycle, ‘Spleen’, began
enigmatically, with its fragmentary piano introduction and low, unaccompanied
monotone recitation. Summerfield found a lovely veiled quality to suggest
mystery in the first couplet, ‘Les roses Ètaient toutes rouges/ Et les
lierres Ètaient tout noirs’ (All the roses were red, And the ivy was all
black), before lifting and brightening her voice for the subsequent verses. I
was impressed during these Debussy songs by how skilfully she conveyed the way
that Debussy translates poetic nuance into musical expression.

After the interval, Summerfield return to the platform alone, for a
performance of Jonathan Dove’s Ariel, in which she showed her
theatrical instinct, deftly capturing the mercurial character of the eponymous
sprite. Dove sets the three songs that Ariel sings in Shakespeare’s The
Tempest, along with other text from the play. Prospero’s isle is, as
Caliban tells us ‘full of noises, Sounds and sweet airs, that give delight,
and hurt not’, and Summerfield exploited Dove’s recreation of these
haunting, beguiling sounds to the full, with impressive technical control,
singing with great power and imagination. The score contrasts earthy dance-like
passages with long lyrical lines, and the soprano captured this duality of
idiom and personality: her Ariel was both ethereal and sensuous, defiant and
pliant. The onomatopoeic devices and effects of ‘Come unto these yellow
sands’ were executed with commitment, and the song’s rapid text repetitions
and wide range posed no problems. Summerfield used the consonants effectively
in the clanging bell mimicry of ‘I boarded the King’s ship’ — ‘Dong
dadang dong’ — her voice resonating powerfully. The vocalise ‘O, O, O’
ranged from magisterial to wistful, and Ariel’s complicated relationship with
his master — simultaneously rebellious and servile, insolent and indebted —
was effectively conveyed in ‘All hail, great master’, a song whose large
vocal leaps present their own challenges. ‘Is there more toil?’ brought
renewed freshness, excitement and wonder: ‘Where the bee sucks, there suck
I.’ In the final lines — ‘I drink the air before me!/ I go, I go, I go./
Ssshhh. Ssshhh. Ssshhh.’ — Summerfield acted impressively with her voice.
Through this demanding set of songs, she captured the strange paradoxes of the
magical slave, who is at once both deeply sensual and eerily asexual.

Summerfield not only won First Prize in last year’s Ferrier Competition,
but was also awarded the Song Prize for her interpretation of Sibelius, and it
was good to have the opportunity to hear again her engaging interpretation of
‘Flickan kom ifrÂn sin ‰lsklings mˆte’ (The girl returned from meeting
her lover), which relates the tale of the girl who, returning from an amorous
assignation, must confront her angry mother. The Romantic mode of the song was
enhanced by Lepper’s swelling, between-phrase interjections and swaying
syncopations, as Summerfield forcefully conveyed the girl’s yearning sadness
and turbulent, angry anxieties. Both ‘Vilse’ (Lost) and ‘Se’n har jag
ej frÂgat mera (Since then I have stopped asking) intimated a burdensome
weight of feeling.

The four songs of Richard Strauss’s Op.27 Lieder concluded the
programme. In ‘Ruhe, meine Seele’ (Rest, my soul!) Lepper’s dissonant
opening chords established a mood of distance and alienation which
characterised the reticent vocal line, though there were moments of
illumination, as when Summerfield traced a clear arc of ‘bright sunshine’,
‘Sommerschein’. Later, the piano’s ponderous chords punctuated a vocal
line which was weighed down with weariness. In contrast, ‘C‰cilie’
(Cecily) was imbued with impetuous capriciousness, and was sung by Summerfield
with fluency and ease. This song ran straight on into ‘Heimliche
Aufforderung’ (Secret invitation), with its delightfully rippling
accompaniment, leading to the final song, ‘Morgen!’ (Tomorrow!), the melody
of which was spun with poignant reflection.

It was good to have the opportunity to hear again a young artist of such
promise and potential. Summerfield will perform the role of Ginerva in
Handel’s Ariodante in this year’s London Handel Festival (Royal
College of Music, Britten Theatre (8-14
March) and will perform with Classical Opera in their presentation of the UK
premiere of NiccolÚ Jommelli’s Il Vologeso at the Cadogan Hall on
28 April.