Characteristically cerebral yet playful, the film opens with a logo,
‘Not Mozart’, and a Magritte-like image of Mozart’s
familiar silhouette, complete with periwig, minus his visage. The
subsequent video-collage constructs the ‘man’ and
‘musician’ through the parts, and absences, which form the
whole.

The Barbican Centre’s celebration of the music Louis Andriessen,
takes its title from Greenaway. This series of performances and events, by
the Britten Sinfonia and BBC Symphony Orchestra, similarly places
side-by-side the eclectic influences – Bach, Stravinsky, Mondrian, Dante –
from which Andriessen has drawn inspiration and reveals the
composer’s distinctive musical voice.

In La Passione, Andriessen’s 2002 song-cycle on texts by
the Italian poet Dino Campana (1885-1932), the two soloists, singer and
violinist, are both accomplices and adversaries. Though stylistically and
formally the work has more in common with Stravinsky than with Bach, there
is a nod in the direction of the latter’s Passions in the
quasi-obbligato function of the violin part, which, in Andriessen’s
words, ‘shadows the voice in a diabolic way, exploring the
threatening nature of much of the poetry, like the world of a Bosch
painting’. 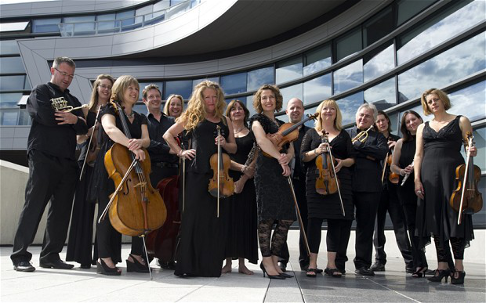 The work was composed for, and inspired by, Andriessen’s oft and
close collaborator Italian mezzo soprano Cristina Zavalloni and violinist
Monica Germino; the latter was indisposed on this occasion, but her
replacement, Frederieke Saeijs, playing with considerable virtuosity and
composure, was as immersed in Campana’s surreal hinterland as
Zavalloni. Standing to left and right of the tightly arranged ensemble, the
(amplified) soloists dramatized the poet’s mental anguish – Campana
was troubled by mental health problems and spent the last 14 years of his
life in a psychiatric clinic near Florence – Saeijs embodying a demonic
presence in the poet-speaker’s mind. Campana’s strange
symbolist texts depict an autobiographical ‘journey’ – physical
and spiritual – from Marradi, through Bologna, Genova and on to Argentina.
Zavalloni conveyed the terrors and travails of his quest for an
‘eternal moment’ which will bring peace, with visceral
engagement, entering the poet’s fantastical, sometimes gruesome,
dream-collage, with total commitment: indeed, some may have found her
flinching, swaying, kneeling and hand-gesturing to be distracting.

Zavanolli did not neglect the lyricism in the pain, the sweetness in
despair, and demonstrated enormous vocal versatility; if at times there
were shrieks or sobs, and some problems with tuning at the top, then this
did not seem out of keeping with the nature of the work. The mezzo
soprano’s constantly changing vocal colour captured the full range of
the text’s emotions, from ennui to elation, hallucination to pained
lucidity. She relished the vocal glissandi and negotiated
Andriessen’s awkward intervallic leaps, which convey the emotional
instability which both disturbs and defines the poet-speaker, with
unnerving ease.

Biting, angular brass fanfares herald the first song, ‘Una Canzone
Si Rompe’ (A Song Breaks) – and the brass form a stable core in the
instrumental sound-world, against the shifting colours of synthesisers,
guitars, pianos, cimbalom, woodwind, strings and percussion. Zavalloni was
a theatrical presence from the first, lured into the emotional drama by the
orchestra’s persuasive syncopations. ‘La Sera di Fiera’
(The Evening of the Fair) was assertive but the singer slipped into more
lyrical reverie with a memory, ‘Era la notte/ Di fiera della perfida
Babele’ (It was the night of the fair perfidious Babel), and span a
beguiling tale whose bizarre visions of ‘grotesque whistling’,
‘angelic little bells’, prostitutes’ cries and
‘pantomimes of Ophelia’ accrued a frightening, propelling
energy. The entry of the violin, slow-moving and shrouded in dissonant
harmonic arguments, exposed the poet-speaker’s vulnerability, which
comes from absence of love: ‘Eppure il cuore porta del dolore:/
Lasciano il cuore mio di porta in porta.’ Campana infused the
swelling final syllable with all the ‘pain’ which leaves
‘my heart in portal after portal’.

The wild vigour of Saeijs’ cadenza-like outburst – fiercely
punched out low tones batting with the raging of the upper strings –
embodied the ‘horned black form’ which haunts the following
song, ‘Una Forma Nera Cornuta’, the searing strength of the
violin tone calling forth an orchestra tumult. Saeijs was an eerie
interloper in ‘O Satana’ (O Satan). Zavanolli addressed her
antagonist with oratorical power, before the voice withdrew, sapped of its
strength, and – with a vocal slide that signalled the poet-speaker’s
desperation and defencelessness – called on the dark presence to
‘take pity on my long suffering!’

‘Sul Treno in Corsa’ (On the Moving Train) began with a
nightmarish melange of jerking lurches and piercing whistles, before the
rhythms acquired coherence and urgency: ‘la corsa penetrava,
penetrava con la velocita di una cataclisma’ (the motion penetrated,
penetrated with the speed of a cataclysm). Zavanolli literally squared up
to her alter ego, asking ‘era la morte?/ Od era la vita?’ (was
it death? Or was it life?) The final song, ‘Il Russo’ (The
Russian) gave a bleak answer. The text depicts the execution of an unnamed
Russian soldier. The crystalline, high violin line – almost vibrato-less,
its intensity formed by the purity of tone and the focus of the bowed
strokes – the juxtaposition of high and low wind, and the infiltration of
an array of percussive knocks and pluckings by the violins, electric and
bass guitars, and cimbalom, recreated the harrowing landscape, literal and
figurative, of WW1. Saeijs, at first soaring confidently then challenging
with vicious pizzicatos, baited the singer. But, an ‘eternal
moment’, if not peace, was intimated in stillness of the
poet-speaker’s realisation, ‘il Russo era stato ucciso’
(the Russian had been killed).

Conductor Clark Rundell was an unobtrusive yet reassuring presence,
guiding the performers fluently through the contrasting songs, which flowed
as an organic, single-movement entity. The Britten Sinfonia demonstrated
unflagging energy as they surged through the hurtling, insistent – at times
astringent – lines of Andriessen’s score.

In a concert in which percussionists and pianists dominated – there were
almost more timpani and keyboards on stage than there were string players –
the strings did ‘have their moment’, in the opening work of the
concert: Steve Martland’s Blake-inspired Tiger Dancing.
Commissioned by the Britten Sinfonia and the Henri Oguike Dance Company in
2005, it presents 10 variations inspired by William Blake’s The
Tyger, and is based on Martland’s own setting of that text.
Martland, who died in 2013 at the untimely age of 58, was a pupil of
Andriessen – about whom he later wrote and directed a television film,
A Temporary Arrangement With the Sea (1992) – and this work is
infused with Andriessen’s fervent expressiveness. The rhythmic
vibrancy of the work confirmed its dance origins, and proved infectious as
the standing string players swayed and pulsed, stirred by the propelling
energy of the jazz-tinged syncopations. Pizzicatos zinged like flashes of
light; the bright buoyancy of the score is surprising given the dark
energies and mysteries of Blake’s poem. But, the juxtaposed textures
created their own arguments, and sombreness was present in the deep
sonorities of the centrally-placed double basses whose strong, sustained
assertions underpinned vigorous development above. Incisive – especially in
the homophonic, fragmented assertions and rapid, repetitive textural
effects – but not always completely precise, the Britten Sinfonia gave an
alert and colourful rendition.

During the lengthy stage re-arrangement which followed, Rundell
commented on the expressive and structural significance of William Carlos
Williams’ poem, The Orchestra, to Steve
Reich’s 1983 work, The Desert Music. The 50-minute work,
impressively monumental even in the chamber orchestration presented here,
opposes light and creativity with human destructiveness: the
‘desert’ is both the test-ground for the first atomic bombs and
also a symbol of spiritual enlightenment. The work centres on the
poet’s alarming warning: ‘Man has survived hitherto because he
was too ignorant to know how to realize his wishes. Now that he can realize
them, he must either change them or perish.’

The orchestra’s dissonant harmonies and reverberations, the
textural contrasts and the sudden shifts of tempo seem designed to
represent mankind’s struggle to control the diverse and at times
disparate possibilities and to find order; and this is impression is
emphasised by the palindromic structure of the work. The characteristic
elements of Reich’s music are all here – the repeating patterns, the
pulsing cycles, the imitations, the fluctuating meters – but there is a
striking intensity, which is enhanced by the percussion’s almost
incessant battering and pounding. From the amplified 10-strong Britten
Sinfonia Voices – placed behind triple string quartet, four flutes,
multiple percussion and several pianos and synthesisers – fragments of
Willams’s text swelled and pulsed, floating freely. Unfortunately the
Sinfonia Voices were exposed by the amplification, individual voices at
times assuming undue prominence, and every tuning blemish writ large. The
stamina of the instrumentalists was impressive but while Rundell was again
a clear and consistent guide, the ensemble rocked at times. But, the
overall effect was persuasive, and the close, as the bass line dropped away
leaving the upper lines unsupported, was equivocal and
thought-provoking.

Cristina Zavanolli returns to the Barbican on Friday 12th
February to join the cast of Andriessen’s opera, La
Commedia, accompanied by the BBC Symphony Orchestra and conducted by
Martyn Brabbins: http://www.barbican.org.uk/music/event-detail.asp?ID=17559