He wrote La Tosca for Sarah Bernhardt who was fond of historical melodrama. It was an outstanding success at its 1887 premiere and for several years afterwards she toured major European cities with it.
Puccini saw the play in both Milan and Turin during its 1889 Italian run and he wrote to his publisher, Giulio Ricordi, asking him to secure Sardou’s permission to use the work as the basis for an opera. Puccini wrote, “In this Tosca I see the opera I need, with no overblown proportions, no elaborate spectacle, nor will it call for the usual excessive amount of music.” Sardou preferred to have a French composer set his play to music but he eventually allowed librettist Luigi Illica to write a scenario.
Illica did not think the work suitable for an opera and Sardou let it be known that he was not a fan of Puccini’s music. Puccini prickled at the insult and withdrew from the scene, so Ricordi assigned the work to composer Alberto Franchetti. Franchetti, however, was not at home with the play and in May 1895 it reverted to Puccini. Illica and poet Giuseppe Giacosa wrote the libretto and Giacomo Puccini’s Tosca was premiered at the Teatro Costanzi in Rome on January 14, 1900. 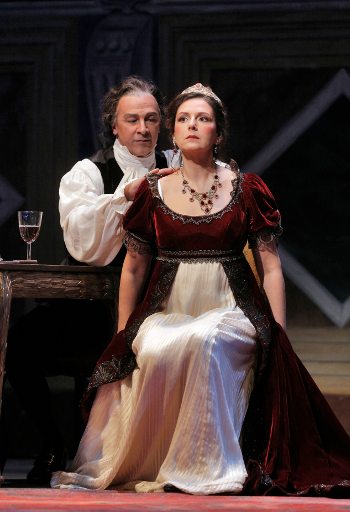 Greer Grimsley as Scarpia and Alexia Voulgaridou as Tosca
On February 13, 2016, San Diego Opera presented Puccini’s Tosca directed realistically by Leslie Koenig who paid a great deal of attention to detail regarding both the major and minor characters. Andrew Horn designed the scenery and Andrew Marley did the costumes. The sets for Act I, the church of St. Andrea della Valle, and Act II, the Farnese Palace, were absolutely magnificent in their ability to capture time and place. The Angel of the Castel in Act III, however, seemed a bit on the heavy side.
Alexia Voulgaridou was tragic and intense Tosca. Her diva was ravaged by anguish at her lover’s torture and she readily communicated her hatred of his torturers. She gave every word of her role a value. In the broader lyric passages she used a huge palette of vocal colors and, although she reserved her strongest notes for Tosca’s passionate outbursts, her tones were always replete with dramatic eloquence. She sang her aria, “Vissi d’arte,” with creamy, lyrical tones. Behind the Castel’s angel, the brightening sky showed a glowing stroke of dawn as Tosca jumped toward her meeting with Scarpia before God.
Tenor Gwyn Hughes Jones has a large voice with a smooth, bright, resonant sound. His Cavaradossi was volatile and exciting, so it was an excellent fit with Voulgaridou’s Tosca and Grimsley’s Scarpia. Hughes Jones sang the romantic “Recondita Armonia” with a joyful sound and “E lucevan le stelle” with the pathos of a man who knows how much of life he will lose.
A master of stagecraft, Greer Grimsley’s Scarpia disguised his evil passions and cynicism with a veneer of aristocratic elegance. In the first act, his voice easily surmounted the orchestra and full chorus of the Te Deum as he proclaimed that Tosca made him forget God. In Act II, he made the audience believe he was a connoisseur of fine art while he enjoyed torturing both Cavaradossi and Tosca.
Scott Sikon’s well-crafted Sacristan was outwardly pious but secretly selfish. Kristopher Irmiter’s Angelotti evoked a great deal of sympathy but later he became a frightening Sciarrone. Joel Sorensen was an obedient Spoletta and Bridget Hogan sounded like a young Shepherd boy.
Tosca is one of the most Italianate of operas and Italian conductor Massimo Zanetti brought verismo passion and a wide range of dynamics to the podium. He drew a delightfully nuanced performance from the San Diego Symphony Orchestra. On Saturday night the opera audience showed its appreciation for this rendition of the beloved Puccini favorite with a long standing ovation.
Maria Nockin
_________________________________________
Cast and Production Information:
Angelotti and Sciarrone, Kristopher Irmiter; Sacristan, Scott Sikon; Cavaradossi, Gwyn Hughes Jones; Tosca, Alexia Voulgaridou; Scarpia, Greer Grimsley; Spoletta, Joel Sorensen; Shepherd Boy, Bridget Hogan; Jailer, Johnny Bankens; Conductor, Massimo Zanetti; Director, Leslie Koenig; Scenic Designer, Andrew Horn; Costume Designer, Andrew Marley; Lighting, Gary Marder; Chorus Master, Charles Prestinari.
.