It premiered at Santa Fe last summer and is now launching an East Coast
premiere run in Philadelphia. After nearly three hours of opera, the audience
gave the performers and composer a standing ovation.

This company has a knack for assembling superb young casts. Every member of
the cast—most of whom premiered the opera in Santa Fe—are
comfortable in the roles, look the parts, sing well, and render the words
clearly enough to render supertitles superfluous.

Two stand out. Tenor Jay Hunter Morris’s full voice, menacing aspect
and Georgia drawl fit the villain Teague, and he finds a way to inflect each
line with distinctive emotion and musicality. Young baritone Jarrett Ott, a
local Pennsylvanian, recently replaced Santa Fe’s Nathan Gunn as W.P.
Inman, the Southern deserter around whom the plot turns. Ott delivered a
remarkably assured and characterful opening night performance, with no sign of
nerves. If he lacks a bit of Gunn’s vocal splendor, his slightly thinner
voice at the top gives Inman an appropriately vulnerable aspect. 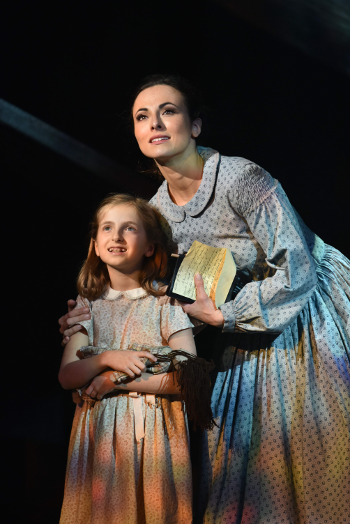 Ada (Isabel Leonard) and her daughter Grace
(Francesca Luzi) in the epilogue of the opera, which flashes
forward nine years.

The rest of the cast is uniformly strong. New Yorker Isabel Leonard, a
rising star singing lyric mezzo roles at major houses worldwide, looks every
inch the lovely Southern belle. She portrays Ada Monroe with an even tone
throughout and occasional flashes of emotion. Cecelia Hall, who comes by her
North Carolina accent honestly, wove a distinctive and believable country
counterpoint to Ada. A host of ensemble singers, many doubling parts, created
memorable cameos, not least the veteran Anthony Michaels-Moore. Music Director
Corrado Rovaris kept the band together.

Yet, unlike many who were there, and despite the fine technical performances
from the singers, I found the evening disappointing, even dull. Morris aside,
no one conveyed real emotional connection with the music. The fault lies not
with them, but with the work itself. This relentlessly functional treatment of
Cold Mountain just does not succeed as a music-drama. Overall, the
result recalls what often occurs when Hollywood tries to film a popular epic
book, like the 19-½ hour Tolkien series. Almost invariably such films
become overlong collections of telegraphic scenes, each underwritten and
underacted, held together only by the audience’s prior knowledge of the
plot.

So, too, with Cold Mountain. In this case, the problem lies both in
the libretto and the music. Many lines in the libretto are evocative and
beautifully written for voice. Yet its overall structure is at once bland and
cluttered: a three-hour slog, dialogue-by-dialogue, through the epic plot, with
surprisingly few semi-arias or ensembles. What thereby goes missing, especially
in Act I, is any serious engagement with the deeper emotions below. 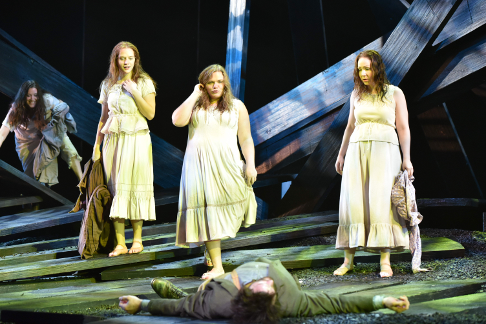 Cold Mountain is a profound tale—like the Odyssey,
on which it is loosely based—about how extreme hardship forces us to
distill our lives down to the simple thing, horrible and wonderful, that
matters most. In adversity, we reveal who we really are. Such a plot should be
tailor-made for an operatic libretto. After all, opera excels—and differs
fundamentally from spoken theater—in its unique ability to expand
interior moments of self-discovery into extended musical monologues of uncommon
expressiveness. Just think of the Shakespeare operas of Giuseppe Verdi,
who—despite a boundless admiration for the Bard—ruthlessly trimmed
and revised major his plays into tight libretti. The result: arias and
ensembles like Otello’s “Dio mi potevi!” Iago’s
“Credo,” and Desdemona’s Willow Song. Or consider the operas
of Benjamin Britten, in which the monologues of Peter Grimes and Lucretia let
us glimpse into their souls.

The libretto of Cold Mountain goes through the motions but makes
almost nothing of such moments. When Inman resolves to free himself from
chains, Sara shoots the fleeing Union soldier, Ruby realizes that she loves her
father, and Ada and Inman reconcile… critical moments pass in a blink of
an eye, are hijacked for other purposes, or receive a clichéd
treatment.

Jennifer Higdon’s bland musical score compounds the lack of dramatic
focus. Higdon, who teaches at Curtis Institute, is a polished and prolific
composer of concertos, chamber music and orchestral pieces. She has a flair for
crafting slowly evolving mélanges of musical color and texture. Yet this
is her first opera, and the challenge seems to throw her for a loop. 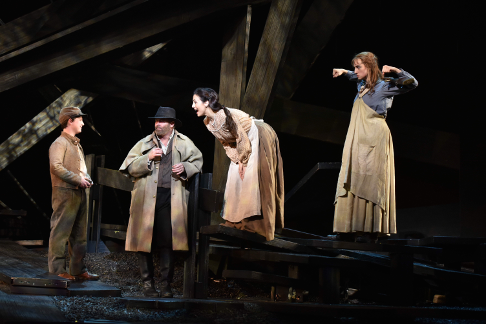 Most of Cold Mountain is written in a recitative or
parlando dialogue, which hardly sustains much dramatic punch. Only a
few arias or ensembles appear, and those that do lack melodic, harmonic or
rhythmic novelty or focus. Higdon’s style is a (now conventional) mix of
atonality and popular genres, in her case mostly open intervals (fourths,
fifths and various intervals in diminished modes) somewhat uncomfortably mixed
with traditional Southern themes. Her attempts to characterize more intensely
generally take the form of giving different characters and moods their own
colors. Soft strings provide a background, Ada gets woodwinds, Ruby gets
percussion, Inman (and others) gets spiky agitated brass when he is upset,
Teague receives ominous bass instruments, and so on. At best these efforts
produce musical effects—some interesting, some pleasant (as with several
horn ensembles) and some fleeting emotional flickers—but they create no
overarching dynamic tension or flow, as an opera score should, let alone
insight into the emotional or dramatic circumstances.

Even Higdon seems to realize this. Half-way through the second act, at a
critical dramatic climax when soldiers come back to life to sing of the war,
she throws in the towel and inserts an utterly traditional 19th
century gospel chorus. This “Ken Burns moment” is by far the most
successful musical coup in the opera, yet its utter incongruity begs the
question of what the rest of the music is meant to achieve. The end of Act 2
takes a stab at a few unpersuasive ariettas and duettinos,
only to let the opera peter out almost accidently, with Ada in seeming
mid-phrase. Throughout, the music seems incidental and emotionless, as if it
were written as a movie score.

The staging, also shared with Santa Fe, exacerbates the lack of clear
dramatic focus. Also in this way recalling the Odyssey, Cold
Mountain turns on the contrast between the unknown and dangerous world far
away and the special place we call home. Inman wanders endlessly through the
varied and hazardous landscape of the wartime South, while Ada remains fixed in
a bucolic Southern country valley. It is a valley with a snake, of course, but
the plot ends by restoring a familial utopia free not just from war, but from
sexism, racism, class prejudice and personal anxiety. The unit set—a
gloomy pile of scattered timber and coal—does not do justice to either
major theme. Its static, unvarying enclosed darkness gives little sense of a
hostile wartime world, while it also resembles in no way the potential Garden
of Eden that is Cold Mountain. The production is somewhat improved visually by
uncommonly clever lighting, which permit characters to come and go through a
veil of light, and scenes to change quickly during a long evening at the
opera.