We caught the London premiere of the opera on 3 February
2016 at the Peacock Theatre
whenMichael Rafferty
conducted the Music Theatre Wales Ensemble withNicholas Sharratt as Richard,
Ben McAteer as James,Rachel
Kelly as Catherine andSteven
Page as the Old Man and a Vagrant. The director wasMatthew
Richardson with design bySamal
Blak, and lighting by Ace
McCarron.

It is clear from the programme notes that the opera is very
much a collaboration and that Louise Welsh (best known for her
novels) did not simply write a text and hand it over to Stuart MacRae.
The piece they have crafted is wonderfully thrilling and gripping, with a
plot updating Robert Louis Stevenson’s story The Bottle Imp to the
21st century. Richard (Nicholas Sharratt) and James (Ben McAteer) are lost
in the mountains, the come across a mansion owned by an old man (Steven
Page). The man reveals the secret of his wealth, a magic bottle which
contains an imp which will fulfil all your wishes. The only drawback, the
owner’s soul is damned to Hell if they own it when they die, and they can
only get rid of the bottle by selling it for less than they paid for it. At
Richard’s urging, James buys the bottle. 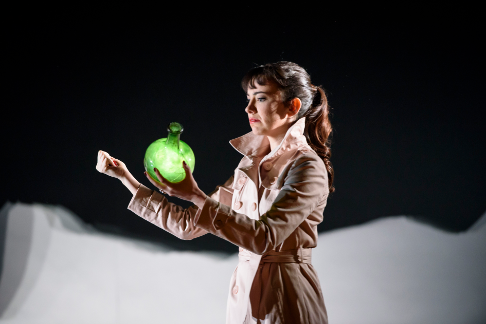 The remainder of the opera examines Richard and James’s
attitude to and need for the bottle and its imp. James eventually sells the
bottle to Richard, and acquires a wife Catherine (Rachel Kelly) but they
have need again when Katherine is diagnosed with a terminal illness. James
has moral objections to the bottle, wondering whether good can come out of
evil, whilst Richard is addicted and becomes like an addict who fails to
cure his addiction.

The final scene, on a Pacific island where James and
Catherine try to sell the bottle (now worth virtually the lowest coin
possible) is rendered morally ambiguous by the participation of Richard who
makes a final buy of the bottle, for one last wish. The result is an opera
which has elements of the dark thriller. Stuart MacRae and Louise Welsh
really make you invest in the characters and what might happen to them. But
woven into this are the themes of morality, moral ambiguity and addiction,
as well as the transformative power of love.

Stuart MacRae is clearly a writer of orchestral music of
great talent, his orchestral score for The Devil Inside doesn’t so
much accompany the singers as surround the vocal lines with a magical web
of sound. The music moves flexibly between dissonance, tonality and
atonality and the instrumental musicians made use of quarter tones too.
This was most noticeable in the music for the bottle imp (the imp never
singers but MacRae gives the orchestra a distinct and magical cast). It was
a complete sound world which drew you in and carried you to the end. 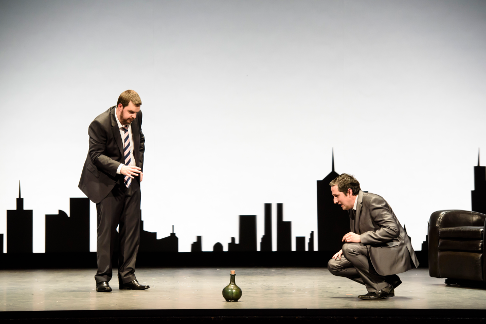 Ben McAteer as James and Nicholas Sharratt as Richard

The opera had hardly a spare moment, its seven scenes
encompassed 110 minutes of music, and Louise Walsh’s taut libretto uses
very much a spare demotic style which is not without poetry. She is clearly
aware of the need to leave space for the music.

The only aspect of the opera which worried me was the vocal
writing. Stuart MacRae has clearly worked hard to make the vocal lines
singable and of interest. But there seemed an insufficient distinction
between different emotional states so that the overall tint of the vocal
writing came over as too uniform. I wanted the more straightforward
conversational moments to be far more differentiated from the complex
emotional passages. It seemed to be only in the final scene that he ratched
things up a notch. But this is a first full length opera and an enormous
achievement so I look forward with interest to what Stuart MacRae and
Louise Welsh will do next.

Ben McAteer and Nicholas Sharratt formed a wonderful double
act throughout the opera. Nicholas Sharratt’s Richard started off nervy and
excitable and then gave a stunning descent into addiction. By contrast Ben
McAteer’s James was the more stable and solid one, but constantly worrying
about the moral qualities of using the bottle and disturbed not by
addiction but by conscience. The two characters were profoundly disturbed
by the moment when they asked the bottle imp to show itself. Though here, I
wanted something more n the music, a sense of greater otherness. Ben
McAteer’s James also struggled with the transformative power as love as
Rachel Kelly’s Catherine came into James’s life. Kelly gave a lovely
portrait of someone carefree coming to terms with the grim realities of
life (childlessness possible lack of love and death). Both McAteer and
Kelly’s characters endangered their souls for the sake of the other, in a
depiction of love which wonderfully avoided the stickily sentimental.
Steven Page gave to different yet vivid performances as the old man who
sold the bottle at the beginning, and was gleeful to be relieved of it, and
of a vagrant at the end.

Michael Rafferty conducted the 14 players of the Music
Theatre Wales Ensemble who gave a dazzling performance of Stuart MacRae’s
often seductive and always fascinating score. The players were called upon
to give us some interesting doublings, not just bassoon and contra-bassoon,
but the oboist also plays a bagpipe practice chanter, and the violins play
harmonicas at one point. They all brought an incisive precision to the
music. Neither the instrumental ensemble nor the capable cast gave any hint
that this was the first run of a new opera, so natural did the performance
feel.

Matthew Richardson’s production and Samal Blak’s designs
were imaginatively minimal, throwing focus on the performers and making us
care for the characters. Blak’s designs made striking use of projection,
with a minimum of props.

I am not sure that the Peacock Theatre was the ideal venue
for the performance; many venues on the tour are smaller. But this was a
vividly gripping evening of opera which certainly made me look forward to
more.