Director Henry G. Akina has skillfully crafted an unfussy, straight
forward, tightly organized production of A Midsummer Night’s
Dream, that offered few surprises but ample delights. Mr.
Akina’s clarity of story-telling is a welcome asset, and he moves his
performers around like the seasoned pro he is, with utmost clarity of
purpose.

Mortals, gods, and rude mechanicals alike are well-characterized here,
not only as definitive, identifiable groups, but also as highly
individualized components in the story. Some whimsical touches drew audible
audience appreciation, whether it was Tytania playfully wriggling her
behind onto a hammock; Puck’s astonishing defiance of gravity with
weightless leaps and jetées; or Lysander’s and Demetrius’
use of Helena as a human rope for an amorous tug-of-war. 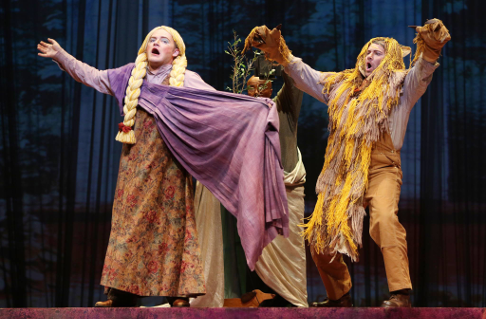 Peter Dean Beck’s set design was highly efficient: a workable
center stage unit set of platforms and stairs that provided an ideal
environment for varied scenes and locales. This unit was beautifully framed
by a diaphanous “forest” of legs and borders on which were
projected a spectacular series of images, masterfully designed by Adam
Larsen. The constantly modulating, universal woods changed seasons, changed
climates, and conveyed a well-calibrated sense of the passing of seasons.
The ‘autumn’ leaves falling as the lovers transitioned was a
feat of potent and moving imagery.

Mr. Beck complemented Mr. Larsen’s projections with a carefully
considered lighting design: atmospheric, moody, and always well-judged. The
simple addition of a set of “tree trunks” (in the form of
stylized drapes that flew in and out) was all that was needed to complete
the magical playing space. That said, I do wish that actors hadn’t
kept bumping into those fabric “trees” causing them to jiggle.
There was a cleverly crafted hammock for the Fairy Queen, and a simple
workbench on saw horses was smoothly schlepped in and out by the rude
mechanicals. In total, Beck contributed a practical environment of scenery
and lighting that was admirable for its visual economy.

Helen E. Rodgers has contributed a commendable cornucopia of fantastical costumes with her inspired design, aptly defining each divergent group, while simultaneously dressing each individual in apparel distinctive to their function in the story. Rick Jarvie’s and Sue Sittko Schaefer’s imaginative, spot-on wig and make-up design was a critical component in the success of the production, enhancing the performers in making their full effect.

Best of all, singing was of a uniformly high standard throughout. As
Lysander, John Bellemer displayed a compact, pliant, gleaming lyric tenor.
He was well complemented by Joshua Jeremiah as Demtetrius, whose warmly
appealing, burnished baritone was wedded to exceptional diction. Both cut
strapping romantic figures. 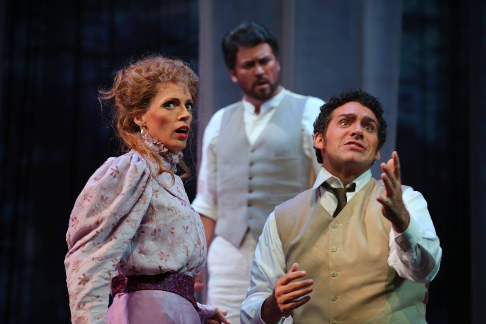 Rachelle Durkin was a commanding presence as a delightfully daffy
Helena. Her accurate, laser-focused coloratura was counter balanced by
evenly produced melismas, vocally a cross between a tuneful yapping poodle
and a mournful lovesick spaniel. All that was wanting tonally was perhaps a
bit more womanly allure. Claire Shackleton’s smooth, ripe mezzo
gifted the role of Hermia with a luxurious lower-middle and an effortlessly
floated top. These four lovers triumphed in the great Act Three quartet,
their fresh, youthful instruments soaring, aching, and tumbling over each
other in heartfelt, overlapping phrases. It proved to be the heart of the
show and the unequivocal triumph of the evening.

Anne-Carolyn Bird and Daniel Brubeck were flawlessly paired as Tytania
and Oberon, regal, statuesque, and, oh yeah, sexy. Ms. Bird’s
silvery, shimmering soprano shows off a solid technique, alluring tonal
beauty, and supreme clarity. Her lovely appearance and regal carriage
served the role well. Mr. Brubeck’s appealing, mellifluous
countertenor was freely produced and it dripped with class, both in
richness of sound and in delivery. There could have occasionally been a bit
more point in the lower register, but his elegant singing, lanky demeanor
and ethereal movement made for a fine Fairy King.

Paul T. Mitri was near perfection as Puck. While this spoken role is
greatly truncated in the libretto adaptation, Mr. Mitri made every syllable
count and he accurately spoke his lines in synch with the musical stings.
Moreover, he was a wiry larger-than-life omnipresence owing to an
energetic, super human physicalization that leapt and tumbled and bounced
and vaulted and floated like an Energizer Bunny on Red Bull channeling
Roger Rabbit. A star turn, indeed, Paul.

Nathan Stark made an auspicious role debut as an uncommonly fine Bottom.
His stage demeanor was by turns pompous, genial, blustering, and endearing
and he captured every bit of the part’s humor, especially when
portraying the overwrought Pyramus. His well-schooled bass-baritone has a
steely thrust, and its easy amplitude allowed it to ring out in the house.
Mr. Stark’s authoritative impersonation made us love to be annoyed by
this meddlesome tinker. His loose-limbed antics as the ass were the perfect
partner to Tytania’s ‘gaga’ spooning, but did the
director have to let the “soundly sleeping” couple visibly get
up and casually exit the stage halfway through Act II?

Buzz Tennent’s stolid, resonant baritone showed great nuance and
musicality as Quince/Prologue, missing only a bit of incisive bite when the
orchestration thickened around him. Leon Williams (Starveling/Moonshine) is
a local favorite and it is easy to see why since he is a natural stage
creature and has a rich, rolling baritone, seamlessly deployed. Kyle
Erdos-Knapp’s sweet, honeyed tenor was a perfect fit for the
beardless, just-post-pubescent Flute/Thysbe. As the latter
“damsel” Mr. Erdos-Knapp flounced and minced around the stage
with great abandon, and his melodramatic stage movements nailed every
laugh.

Tyler Simpson was a definite asset to the proceedings, his bass a
pleasing addition as Snug/Lion. The dual roles of Snout/Wall were in the
capable care of tenor Nathan Munson, whose steady and secure
comprimario singing was infused with engaging personality. Mr.
Akina was especially successful in bonding this diverse band of singing
comics into a finely tuned ensemble with well-judged focus and unity of
purpose. Great team players, all. 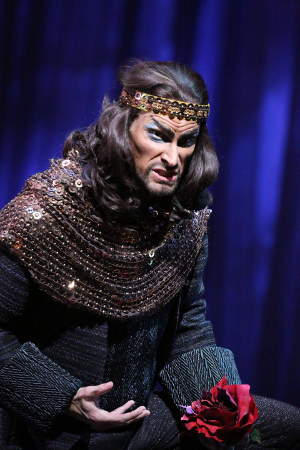 Even the very smallest roles were splendidly cast. As Theseus and
Hippolyta, Jamie Offenbach and Katharine Goeldner come onstage very late in
the evening, but when they did it was no holds barred. Mr. Offenbach has a
height and noble bearing that warrant attention, and his penetrating, dark
baritone scored with the riveting outpouring of every phrase. Ms.
Goeldner’s imposing, evenly produced mezzo similarly weighted each
pronouncement, making her every measure a joy to hear. It is not often two
performers can come in at the 11th hour with such brief
opportunity, and momentarily take over the show, but that’s just what
they did, brilliantly. They left us wanting more. Much more.

Rounding out the cast was a simply stunning group of children as the
fairy chorus, easily the equal of any youth group I have yet heard in any
opera. Their accurate ensemble singing was surpassed only by the high
quality of the four young soloists. They were consummate professionals
throughout, executing their varied choral positions beautifully, always
mindful of the dramatic pacing, and completely focused on the task at
hand.

Benjamin Britten was a master of orchestration. He explored endless
variety of effects, combined sounds in unique and challenging ways, and
demanded virtuosic playing that stretches a band to its limit and provides
no hiding place. Even a highly skilled orchestra that plays together almost
daily is challenged by A Midsummer Night’s Dream. The
ethereal banks of shimmering strings, the unsettling portamenti,
the chattering and skittering winds, the relentless shifting percussive
effects, and the angular (dare I say, ungrateful?) arpeggiated
“fanfares” in the brass are just a few of the daunting
requirements.

If the result in the pit was not always idiomatically seamless, this was
nonetheless a very fine, accomplished effort thanks to the inspired
conducting of William Lacey. Maestro Lacey is a real find, and I always had
the secure feeling that he knew how to confidently draw the very best from
his players and his cast. He found just the right arc for each Act (not to
mention the entire evening), and while he could certainly whip up a
wickedly frenzied mosaic of sound when required, his greatest achievement
may have been in allowing just the right amount of serenity to inform the
introspective stretches, allowing them to “breathe.” He
partnered the singers expertly, wrung every bit of color out of the score,
and summoned up the comedic elements with gusto. Mr. Lacey would seem to
have a great future and boy, do we need him!

If there are easier ‘sells’ than this operatic rarity, the
Tuesday night audience didn’t seem to know or care, responding with
unbridled enthusiasm. The overall charm and accessibility of HOT’s
winningly executed production wrapped the rapt crowd in a joyous artistic
embrace. Dreamy, indeed.