Because the subject matter was considered vulgar and inappropriate for the Comique’s family-oriented audience, it was not well received. The opera’s depiction of lawlessness and immorality broke new ground in French opera. Carmen would later be considered the bridge between opÈra-comique and the verismo style of late nineteenth century Italian opera.
Although Carmen was not revived in Paris until 1883, productions outside of France drew large audiences before that and the opera was soon on its way to becoming the immensely popular work it is today. According to Operabase, Carmen is now the world’s second most popular opera. The only opera that is more popular than Carmen is Verdi’s La traviata.
On February 5, 2016, Arizona Opera presented Carmen in an updated but otherwise traditionally realistic production directed by Tara Faircloth. Douglas Provost’s functional set allowed the story to unfold in a straightforward manner. 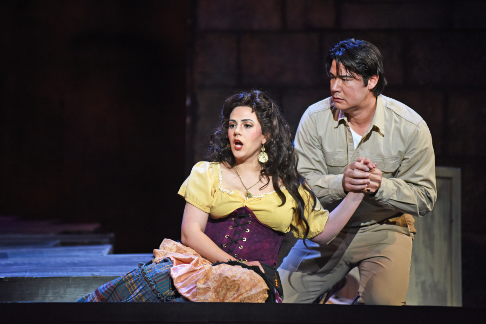 Daniela Mack and Adam Diegel as Carmen and Don JosÈ.
As Carmen, Daniela Mack sang her lines with an exquisite palette of colorations and smooth dynamic range. A singer with dark hued sultry tones, she also had a fine sense of French style. Her personality could have been more fiery and her acting more intense in the dramatic scenes, but she did keep all eyes upon her when she sang. Her renditions of the HabaÒera and Seguidilla established her passionate nature and the deviousness of her character and she continued to emphasize Carmen’s fickleness as the plot unfolded. Her Chanson BohËme showed her love of unrestricted freedom and her Card Song proved her belief in the power of fate.
Adam Diegel was a rough-edged and dramatic Don JosÈ whose burnished, virile sound rang free throughout the auditorium. He delivered his lines with dramatic conviction and his acting conveyed considerable emotional impact. The MicaÎla, Karin Wolverton was a great deal more than a simple country girl who wanted to marry a soldier. A brave and feisty young woman, she readily faced the dangers of looking for her boy friend among a band of soldiers and searching for him at night at an international border crossing. Best of all, Wolverton sang with silvery tones that blossomed into exquisite top notes. 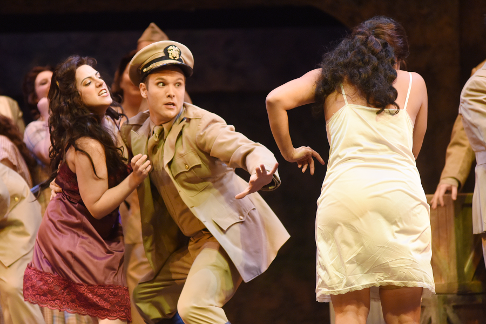 Daniela Mack and Joseph Lattanzi as Carmen and Morales
Calvin Griffin as Zuniga and Joseph Lattanzi as Morales contributed effective portraits as two of the coarse, unrefined soldiers. Ryan Kuster gave a strong impression as the handsome and charismatic celebrity, Escamillo. The difficult tessitura of the Toreador Song seemed easy for him as he sang it to his fans at Lillas Pastia’s Tavern. Amy Mahoney and Alyssa Martin as Frasquita and MÈrcËdes, Joseph Lattanzi and Andrew Penning as El DancaÔro and El Remendado handled their assignments with alacrity. Together with Mack as Carmen the group gave a strong rendition of the tricky Quintet.
Henri Venanzi’s chorus was well prepared and sang in fine French style, but they tended to move as a group rather than as individuals. Conductor Keitaro Harada gave a balanced reading of the score that had a lucidity of musical detail and a good helping of emotional tension. He gave every phrase its proper shape and drew especially fine playing from the orchestra in the delightful entr’acte that opens the third act.
Audiences never seem to tire of Carmen and it always seems to retain its power to quicken the pulse. The many bows and the standing ovation that greeted Arizona Opera’s fine cast at the end of this performance only serve as a reminder of the opera’s well deserved place in the repertoire.
Maria Nockin