Modest Mussorgsky’s byzantine Khovanshchina fictionalises
historical power struggles from which Tsar Peter, later the Great, emerges as
the victor. Its plot, a series of episodic scenes, centres around Prince Ivan
Khovansky’s attempt to topple the Romanovs and put his son Andrey on the
throne. His muscle are the Streltsy, elite guardsmen who have degenerated into
a drunken, plundering menace. The Khovanskys oppose the progressive movement,
represented by Prince Vasily Golitsin, who supports Peter’s reforms
towards a Westernised Russia. As leader of the Old Believers, the enigmatic
Dosifey also opposes religious and political reform, but abhors the
Streltsy’s excesses. Inhabiting an ambiguous moral landscape, these
characters’ motivations are often clouded, making them both intriguing
and difficult to fathom.

Director Christof Loy’s production opens with a tableau
vivant of a painting by Vasily Surikov called the Morning of the
Streltsy’s Execution (1881), which depicts Peter’s barbaric
annihilation of the insurgent militia, an event that occurred outside the
opera’s time frame. Saturated in golden light, as in the original, the
figures in the painting doff their historical costumes and become our
contemporaries. The golden light ebbs away and returns only when the painting
is pieced together again at the end. The concept lucidly connects the
17th century to our time, but relies heavily on strong singing
actors. Once the painting dissolves, the sets consist of starkly lit monochrome
walls, and three hours is a long time to be looking at vacant walls. 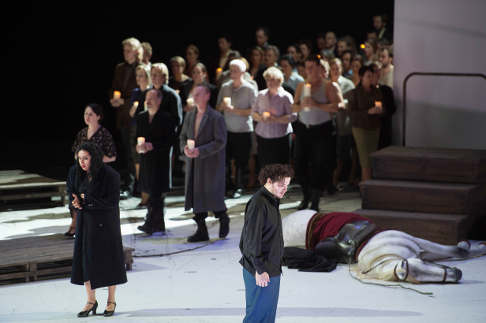 Burdened with sustaining dramatic interest, not all the singers met the
challenge. It was the insistent surge in the orchestra, who poured out delicate
and mysterious tinctures, which unfailingly kept up the tension. Conductor Ingo
Metzmacher beautifully captured both the heady Eastern perfume and the
groundswell of ancient tides in Dmitri Shostakovich’s orchestration of
the score, which Mussorgsky left unfinished. A reinforced brass section
provided excellent military display. In the stupendous choral scenes, the Dutch
National Chorus was on its best form when mixed. All-male numbers lacked a
Slavic full-toned bass and the women’s chorus entertaining Khovansky was
marred by strident top notes. In their best scenes, however, most notably as
the Old Believers, the chorus matched the orchestra in highly evocative
soundscapes.

Transplanting the action to the present worked only partially.
Khovansky’s harem as a nightclub, where underage sex slaves are coerced
into a clumsy Dance of the Persian Slaves, was compellingly disturbing. On the
other hand, a group of supposedly illiterate office workers bullying a Scribe,
portrayed with avid self-importance and reedy tenor by Andrey Popov, into
reading them a notice board, is the kind of incongruence that causes a mental
short circuit. Some symbols remained unclear, maybe on purpose. Did the
pigtailed little girl instrumental in Khovansky’s assassination personify
Russia’s innocence?

The cast was more satisfying than the staging. Well-sung supporting roles
included the orotund-voiced, boisterous soldiers of Vitali Roznyko and Sulkhan
Jaiani. Acting credibly as the drunken Strelets Kuzka, Vasily Efimov wielded a
puzzling tenor, with a breathless, small middle range and brawny loud notes.
Bass Dimitry Ivashchenko, announced as suffering from a cold, sang Ivan
Khovansky full-bodiedly and securely, but needed to tread carefully,
sacrificing a degree of expression. As his son Andrey, tenor Maxim Aksenov
started out with faltering pitch, but improved later on. Orlin Anastassov gave
a frustrating performance as the sect leader Dosifey. His luxurious bass fitted
the role like a glove, but he alternated splendid singing and vivid moments
with gurgled vocalism and monotony. In the end, his Dosifey lacked the dark
charisma that would persuade his disciples to commit mass suicide.

Bass Gábor Bretz’s first appearance as the pro-Romanov nobleman
Shaklovity was vocally prepossessing but rather featureless. Fortunately, he
caught dramatic fire in his great aria bemoaning Russia’s suffering. The
other incendiary performances came from tenor Kurt Streit as the agitated
Golitsin, his bleached high notes registering rising panic, and the three
women. Svetlana Ignatovich left a radiant impression in the short role of Emma.
Some shrillness in her high notes suited the character, who was being set upon
by the lecherous Andrey. Olga Savova was equally arresting as the judgmental
Susanna. Her confrontation with fellow Old Believer Marfa was a theatrical
peak. In fact, every scene with Anita Rachvelishvili in it set off the dramatic
seismograph. Her fascinating Marfa was complex in voice and action, and
completely mesmerising, longing for Andrey in gorgeous mezza voce, and
terrifying Golitsin in her quaking fortune-telling scene. With her voluptuous
contralto base from which her voice curls smokily up the scale, Ms
Rachvelishvili was born to sing this role. Whether she stood in front of a
black or white wall, when she sang the whole stage was aswirl with colour.