English National Opera‘s first ever production of Bellini’s Norma opened at the London Coliseum on 17 February 2016 at a time when the company is particularly in the spotlight. The production was originally seen at Opera North in 2012. Christopher Alden directed, with designs by Charles Edwards. The young American soprano Marjorie Owens sang Norma, with Peter Auty as Pollione, Jennifer Holloway as Adalgisa and James Creswell as Oroveso. Stephen Lord, the music director of Opera Theatre Saint Louis, conducted.

The challenge for any director is to find a setting for Bellini’s opera
which provides the right dramatic intensity of the struggle between Gauls
and Romans (one that with the benefit of hindsight we know to be doomed),
without the possibly risible elements that arise from doing it in togas.
Christopher Alden’s production seemed to be based in a 19th century
Amish-like sect of wood workers and foresters, with the ‘Romans’ marked out
as capitalist exploiters; both Peter Auty’s Pollione and Adrian Dwyer’s
Flavio were dressed in smart 19th century frock coats and top hats in
marked contrast to the backwoods ‘Gauls’. Charles Edwards set was an
impressive yet simple wood clad box (admirably assisting the singers), with
a huge tree trunk into which the ‘Druids’ carved runic like figures and
which, thanks to a system of pulleys, was raised and lowered. This formed
the centre-piece of the ‘Gauls’ cult which seemed to involve imbibing
narcotic fumes to induce a trance. For my taste, Alden was a little too
interested in the minutiae of the cult, with a great deal of business
around the tree, the narcotics, a bible like book and a significant use of
axes. And visually the beauties of the set did not carry over into the
depressingly sludge coloured costuming

I think the production would have been stronger if it had been more
abstract, but Christopher Alden’s productions are rarely discreet. This was
full of his usual trademarks including extremes of behaviour, a mistrust of
the stage directions which was almost wilful and a sense of expressionist
drama which, at its best, can heighten the musical experience. At the
London Coliseum we have recently seen and heard how Christopher Alden’s
approach can work wonders with composers like Janacek, but I was less
convinced by his taking this approach to Bellini. Too often the stylised
behaviour and intense violence on stage seemed at odds to the music in a
way which was distracting rather than producing creative dialogue. 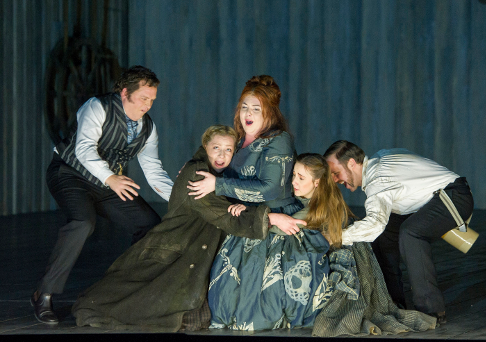 As Norma, Marjorie Owens displayed a big, bright voice with an admirable
freedom throughout the range, with only a hint of tightness at the very top
which is entirely attributable to the effects of a prominent first night.
She is a soprano in the mould of Jane Eaglen (whom I heard as Norma with
Scottish Opera), and Rita Hunter (whom I only heard on record in the role).
Currently she is singing the title roles in Aida and Strauss’s
Ariadne auf Naxos, plus jugend-dramatisch roles such as Senta
(Der fliegende Hollander).

Norma is a big sing and the soprano is rarely off the stage and much of
the drama is developed in a series of duets and trios. But the challenge
for a soprano like Owens is not just the stamina required but to be able to
sing the fioriture cleanly, evenly and expressively. Owens managed
this with creditable honours. Her opening cavatina and cabaletta (which
starts with the famous ‘Casta diva’) showed that Owens could spin a strong
line which was not a little elegant and combine power with a sense of the
shape of Bellini’s music. Perhaps the passage-work was not quite pin-point
but it was damn fine.

Another challenge of this role is to marry up the music and text with an
intensity of purpose (something which Callas demonstrated brilliantly).
Owens showed that she could do this, here scene where she contemplates
killing her children was viscerally intense with every note counting,
despite some ludicrous axe waving which was required of her by Alden.
Elsewhere, I sometimes felt that a care for the beauty of line took
precedence, and wanted her to perform with a bit more risk and a bit more
bite. She enunciated George Hall’s new translation admirably, but could
have relished the text more. All in all this was a notable assumption and a
performance which will certainly deepen and develop.

Jennifer Holloway is a lyric mezzo-soprano who has been seen at the
London Coliseum as Musetta (La Boheme) and Orlovsky (Die
Fledermaus). Not a bel canto specialist, she brought a lyric warmth to
the role of Adalgisa and a nice intensity which chimed in with Alden’s
production. She managed to create a sense of youth without seeming too
Mumsy yet not compromising the warmth of her tone. Not all the passage-work
was free from smudging, but she combined well with Marjorie Owens in the
duets. At the moment some bits seemed a little careful, but there were
enough moments of magic to make me suspect that this partnership will
flourish.

Peter Auty’s Pollione was more of an archetype than a real person. Both
Auty and Dwyer spent far more time on stage than Bellini might have
expected, providing angry, casually exploitative presences. Unfortunately
rather than seeming threatening, much of this verged on risible posturing.
Auty sang Pollione nobly and strongly, providing a firmness of purpose in
the great trio (with Owens and Holloway) which concluded Act One. Yet it
was a performance which did not quite spark to anger, and the final
denouement with Owens seem solidly creditable, but lacking just that edge
of intensity.

James Creswell was an incisive and commanding Oroveso, dominating his
fellow ‘Gauls’ yet singing with a sense of shape and purpose. Valerie Reid
as Clotilde was certainly not the callow girl that Clotilde usually is, and
Reid brought a wonderfully fierce intensity to her portrayal. Adrian Dwyer
as Flavio sang his duet with Auty’s Pollione with fine style, so it was a
shame that he was disembowelled by the ‘Gauls’ for his pains! Felix Warren
and Samuel Murray were Norma’s rather intense two children.

The chorus were on stunning form and were rightly applauded at the end.
They brought a strength and intensity to the choruses which is necessary to
make the ‘Gauls’ believable in their anger, the chorus also brought a sense
of belief in the production so that they invested Alden’s detailed action
with real purpose.

This was a big boned, traditional performance, with Stephen Lord
conducting an up front, sometimes loud, account of the score. There was no
hint of period style (such as Charles Mackerras might have brought to the
performance) and no thought at re-thinking the voice types and
relationships such as happened at Cecilia Bartoli’s Salzburg performances
of the opera. Within these parameters, Lord and the orchestra were were
fine accompanists of the singers, and brought out the marches in stirring
fashion.

George Hall’s admirably straightforward translation was clear and
direct, though it did not quite get rid of that sense of strangeness at
hearing Bellini in English. And the performance made me realise quite how
intimately Bellini’s music is bound up into the sound and the poetics of
the Italian libretto.

I do not wish to decry the performances at the London Coliseum, and I
realise that the exigencies of casting particularly in English make the
perfect cast difficult to achieve. But at a time when English National
Opera is under such close scrutiny, and at time when there is a sense of
questioning as to exactly what the company is for, it was a shame that
three of the leading roles in the opera were cast with Americans.

It was wonderful to see bel canto back at the London Coliseum, the
serious operas of Rossini, Bellini and Donizetti are no where near frequent
enough visitors. I do hope that this production of Norma returns
soon as I feel that it has the potential to grow and develop.