All this would probably remain a footnote to history except Marseille born playwright Edmond Rostand (author of the famous Cyrano de Bergerac) wrote a six act play (1900) that wrung hearts in beautiful alexandrine verse about this young man who was deluded into believing he could restore the Bonapartists to France. The fabled Austrian diplomat Metternich who in fact had engineered the marriage, raison d’Ètat, that begot the Aiglon was now a formidable counterforce for raisons d’Ètat — not to mention his young age and fragile health.
Films based on the Rostand play were made in 1913, 1921 and 1931. In 1936 composers Jacques Ibert and Arthur Honeger joined forces to create an opera (joint compositions a practice Ibert in particular pursued it seems). The libretto was created by the prolific Henri Cain (many operas for Massenet as example) based on the Rostand play, then ruthlessly modified by the composers. 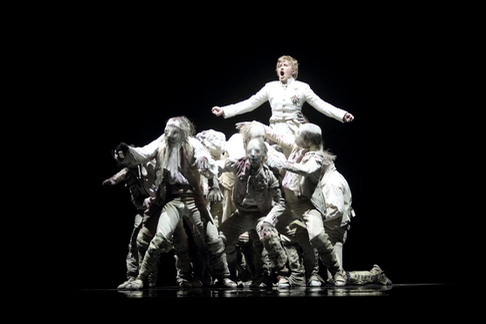 StÈphanie D’Oustrac as Napoleon II reinventing the Battle of Wagram
Ibert composed acts I and V, Honegger wrote II, III and IV, acts I, III and V are based largely on Viennese walzes much in keeping with the boulevard musical popular in Paris between the world wars. Honegger proves himself again a formidable dramatic composer in Acts II and particularly in Act IV which was an evocation of the stunning victory of Napoleon I at the battle of Wagram. Ibert interspersed some lovely airs in Act I and engineered a lovely, touching death in Act V. Both composers created sophisticated music easily accessible to a broad, early mid-twentieth century Parisian public.
The first and biggest problem of the evening was that the program booklet proclaimed no historical context for the opera. Most of us were in the dark, after all the happenings are a minor footnote to history. The program contained only the biographies of the artists plus self-congratulatory notes by the stage director. A “synopsis” stated only that the story is the pathetic attempt to restore Napoleon II as emperor of France. Period. With absolutely no context provided we were forced to keep our eyes glued on the supertitles, deciphering the alexandrines as best we could to create the story that was unfolding way down there on the stage.
And in fact it is a good story, well told by messieurs Ibert and Honegger.
Among other problems of the evening was the Aiglon herself, StÈphanie D’Oustrac who was suffering from a bad cold. In spite of this Mme. D’Oustrac managed a total performance, creating the youth, vulnerability, idealism, naÔvetÈ and delusion of the 21 year-old soldier in often very beautiful voice, and even in the passages in which she was vocally restrained the poetic voice of the Aiglon was never lost. It was a tour de force performance by a very special artist.
The remainder of the cast did not achieve the stature sufficient to support such a performance. There were those who were viable and those who were not, those who could sing and those who could not, those who were too young or too old for their roles. In particular the role of Flambeau, the faithful footman who naively deludes the young soldier, demanded an artist of accomplishment and stature. Such an artist was not provided. 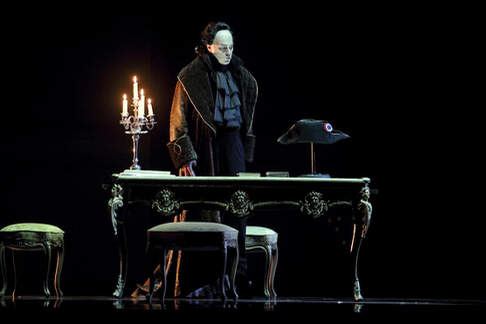 Franco Pomponi as Metternich
This was a remount of a 2004 Marseille production by the metteur en scËne team Moshe Leiser and Patrice Caurier. It is typical of their style which is quite spare but very precise both in decor and by focus of light — characters are placed in specific shafts, lines and pools of light for specific and powerful moments of revelation. It can be very effective. The remount by former Marseille Opera directeur gÈnÈral RenÈe Auphan did not effect the style, hampered by poor casting as well as by attempting to recreate such a precise production so long after it was fresh.
If anything went right it was the pit! Conductor Jean-Yves Ossonce coaxed the Marseille orchestra to beautiful playing, capturing the spirit of the waltzes, the sweetness of the airs, and the dramatic force and colors of the Honegger acts. The pit did indeed make a fine recommendation for this piece to find its way occasionally onto repertory starved, adventurous stages around the world.
Michael Milenski