Puccini and librettist Giuseppe Adami later wrote in Il Tabarro: “Chi ha vissuto per amore, per amore si mori. (Who has lived for love, dies for love).”
American lawyer John Luther Long wrote the original short story, Madame Butterfly based on the recollections of his sister who went to Japan with her husband, a Protestant missionary. Another influence on Long’s story was the 1887 novel, Madame ChrysanthËme by French naval lieutenant Julien Viaud writing as Pierre Loti. He tells of a naval officer and a geisha who were temporarily married while he was stationed in Nagasaki. Most likely Puccini heard French composer AndrÈ Messager’s 1893 opera, Madame ChrysanthËme, based on the Loti work. We know that when the Italian composer was in London he saw the turn-of-the-century play David Belasco based on Long’s story, Madame Butterfly: A Tragedy of Japan.

Ana Maria Martinez’s interpretation demonstrated to audience members that she studied her character thoroughly from both a musical and a dramatic point of view. Her vivid portrayal showed details in pose, gesture, and expression that made Butterfly a flesh and blood woman. Martinez completed her characterization with brilliant vocal artistry that included clear, well-focused tones replete with emotional color. Thus, her aria, “Un bel di,” became part of a continuous action propelling her toward tragedy.
Milena Kitic was a warm voiced, dramatically believable Suzuki who sang meaningfully and with beautiful tones that blended sensitively with the voice of her mistress. Stefano Secco’s Pinkerton was a thoughtless oaf who never considered the feelings of anyone but himself. He sang with a warm Italianate voice but his tones were a bit tight at the very top of his range. 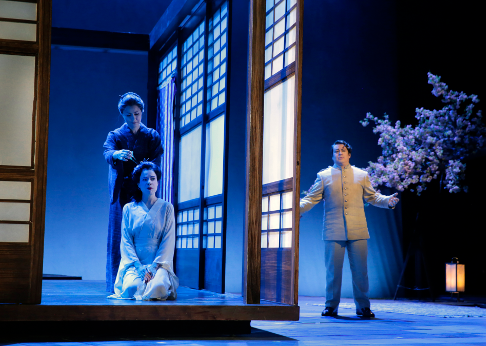 Ana Maria Martinez (kneeling) as Cio-Cio-San, with Milena Kitic as Suzuki and Stefano Secco as Pinkerton
The surprise of the evening was Domingo-Colburn-Stein Young Artist Program (YAP) member Kihun Yoon who brought distinction to the role of Sharpless with his strong, resonant voice and his characterization of the American consul as a sentient human being. As Cio-Cio San’s uncle, the Bonze, Nicholas Brownlee (YAP) was an outstanding actor. Keith Jameson was a persistent marriage broker who pestered Butterfly on behalf of Daniel Armstrong’s assiduous Prince Yamadori. Watching Secco’s Pinkerton, one wonders how long he would stay married to his new wife, Kate, whom Lacy Jo Benter (YAP) played as an innocent young woman.
No matter how many times I’ve heard an opera before, when James Conlon conducts it I hear new sonorities and gain new insight. On Saturday evening he played Butterfly’s “Japonaiserie” with clarity and lyrical beauty. He imbued every phrase with meaning and produced a performance of consistent musical and dramatic values. Under his leadership, Madama Butterfly was a masterpiece of musical theater.
Maria Nockin