Indeed, the
‘Fireside Pantomime’ indulges in fiancé-swapping and satirical
scepticism about love and faithfulness which would not be out of place in
Così fan tutte.

So, we should not be surprised that Sir Nicholas Jackson — composer,
organist and harpsichord — has recognised in the text’s wit,
burlesque, swift character-sketching and dramatic vignettes, the perfect
ingredients for an opera. (In fact, Thackeray’s satire had previously
caught the attention of the English pianist, conductor and composer Ethel
Leginska, who conducted the premiere of her second opera, The Rose and the
Ring (1932) in Los Angeles on 23 February 1957, though I could find no
evidence of the work having been performed subsequently.) Sir Nicholas’s
The Rose and the Ring will receive its first performance at the
Drapers’ Hall in the City of London on 4th May. 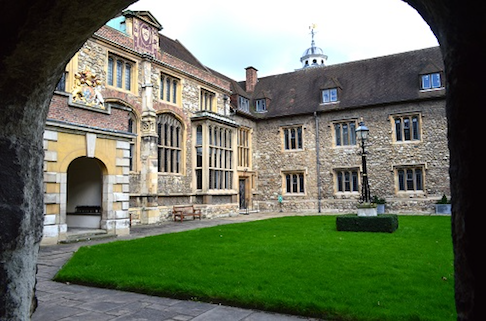 In conversation, Sir Nicholas explained that the origins of the project lay
in coincidental but fortunate happenstance. Sir Nicholas’s grandfather,
the nineteenth-century architect Sir T.G. Jackson — responsible for
landmarks such as the Bridge of Sighs in Oxford and Radley Chapel — had
known Thackeray’s daughter, and when rummaging through some books that he
had inherited, Sir Nicholas came upon a copy of The Rose and the Ring
and was instantly struck by its irresistible charm. Having recently made an
arrangement for wind quintet and harpsichord of a sonata by Domenico Scarlatti,
it seemed to Sir Nicholas that the juxtaposition of the rhetoric of
eighteenth-century musical virtuosity and nineteenth-century literary enchant
would have piquant, invigorating results. So, he set about identifying sonatas
by Scarlatti that might be appropriate for adaptation and orchestration.

As an internationally renowned harpsichordist, Sir Nicholas has had a long
association with Scarlatti; he has performed and recorded about 40 of the
composer’s 555 sonatas and is familiar with many more of
Scarlatti’s works for keyboard. This suggests that selecting the specific
sonatas apt for transformation would have been a straightforward task; but, Sir
Nicholas explained that, although he initially had strong and clear views about
which sonatas would ‘work’, he repeatedly found that his
expectations were mistaken.

The prevailing binary form sonatas proved less suitable than some of the
less well-known longer works and it took some time to determine those ripe for
adaptation. One imagines that the compositional complexity of the works might
also present problems, but listening to the afore-mentioned Sextet (
Nimbus NI6301) I found the conversational character of Sir Nicholas’s
arrangement inherently dramatic, as the woodwind instruments first punctuated
the cadences of the keyboard’s intricate lines, then nonchalantly ran
away with the melodic threads, spinning their own elaborations —
mimicking Scarlatti’s own unconventional voice-leading. The nasal quality
of the deep bassoon offered a characterful bass, and I was reminded that
despite the apparent simplicity and limitation of Scarlatti’s resources,
the composer employed an extended compass and mined a variety of sonorities and
textures. The Rose and the Ring will employ both woodwind and strings,
arranged antiphonally, thereby enhancing the dialogic nature of the score.

The swiftness and athleticism of Scarlatti’s music would seem to endow
it with inherent dramatic properties but a high proportion of Scarlatti sonatas
are fast and Sir Nicholas explained that this presents the singers with several
challenges, not least fitting in the text. In addition, the original keys have
been preserved with the result that at times the vocal lines lie quite high.
But, listening to the Sextet it seems to me that Scarlatti’s use of
repetition and rhetorical pauses, allied with harmonic audacity and far-flung
modulations will prove a perfect match for the ingenious twists and turns of
Thackeray’s absurd plot.

Indeed, as Sir Nicholas recalled, the esteemed Scarlatti scholar Ralph
Kirkpatrick remarked that ‘[Scarlatti] has captured the click of
castanets, the strumming of guitars, the thud of muffled drums, the harsh
bitter wail of gypsy lament, the overwhelming gaiety of the village band, and
above all the wiry tension of the Spanish dance’, adding that the
composer’s music ranges ‘the courtly to the savage, from an almost
saccharine urbanity to an acrid violence. Its gaiety is all the more intense
for an undertone of tragedy. Its moments of meditative melancholy are at times
overwhelmed by a surge of extrovert operatic passion’.

In preparing the libretto, Sir Nicholas endeavoured to retain as much of
Thackeray’s text as possible. To assist an audience possibly unfamiliar
with the tale, Sir Nicholas’s wife has ‘coloured’ several of
the drawings with which Thackeray — who had once intended a career as an
illustrator and who contributed regularly to Punch — had himself
illustrated his novel, and these will be projected during the performance. In
addition, some of the 24 scenes will be linked by narration, delivered by the
actor Tim Pigott-Smith.

The cast of exciting young singers comprises several graduates of the
International Opera School at the Royal College of Music, including 2012
Kathleen Ferrier Award finalist soprano Robyn Parton —the current holder
of the Helen Clarke Award from Garsington Opera, who in September 2015 made her
main stage debut as Barbarina in the ROH’s Le nozze di Figaro;
bass-baritone Edward Grint, a London Handel Competition finalist in 2014, and
Scottish mezzo-soprano; and, Katie Coventry, who is currently training at the
International Opera School with Tim Evan-Jones. They are joined by fellow RCM
graduates tenors Peter Aisher and William Morgan (the latter is National Opera
Studio young artist in 2015-16) and Scottish-Iranian bass-baritone Michael
Mofidian, who is studying at the Royal Academy of Music.

The singers will be accompanied by Concertante of London, the baroque
ensemble which is led by violinist Madeleine Easton and of which Sir Nicholas
is director. Indeed, the instrumentalists (who will perform on modern
instruments) form a body of players with considerable experience of performing
Sir Nicholas’s reconstructions and arrangements, having previously
presented his ‘completion’ of William Lawes’ masqueThe
Triumph of Peace and his realisation of Bach’s Musical
Offering for four players ( SOMMCD 077).

Following the Drapers’ Hall performance, The Rose and the
Ring will receive a public performance on 5th May at The
Charterhouse — and it will undoubtedly be a ‘merrier’
occasion than Thackeray’s own ‘first night’ at the school in
1822, when he encountered ‘hard bed, hard words, strange boys bullying,
and laughing, and jarring you with their hateful merriment’. Following
the Charterhouse performance, the proceeds of which are being donated to the
Charterhouse Charity ( Suttons Hospital) , the
cast will gather on 7th May to record the work for release later in
the year.

The Rose and the Ring is not Sir Nicholas’s first opera. In
1995 The Reluctant Highwayman was performed at Broomhill; subsequently
revised, the three-act work employs similar forces to The Ring and the
Rose. Excerpts have been recorded (
Nimbus NI6301) and Sir Nicholas hopes that the opera might be recorded in
its entirety in the future.

But, before that we have the premiere of The Rose and the Ring to
look forward to, and I anticipate an entertaining and thought-provoking evening
in which social short-comings and human vanity are set alongside the sorrows
attendant on love, and presented in striking music which is both elegant
lavish.