On April 1, 2016, Arizona Opera presented Falstaff by Giuseppe Verdi (1813-1901) and Arrigo Boito (1842-1918) in Phoenix. It was General Director Ryan Taylor’s farewell production because he is moving on to head Minnesota Opera. During his time in Arizona, Taylor helped to ensure the company’s financial security and brought an appreciation of new works to Arizona’s audiences.
Although Boito based most of his Falstaff libretto on Shakespeare’s The Merry Wives of Windsor, he used material from Henry IV as well. Verdi wrote the music when he was close to the age of eighty. He was concerned about his ability at that advanced age, but he was immensely pleased with Boito’s libretto and decided to compose his second comedy despite the fact that his first, Un giorno di regno, had not been successful. On February 9, 1893, the Teatro alla Scala premiered Falstaff, the last of the composer’s twenty-eight operas.
Falstaff’s contrapuntal, harmonic, and rhythmic textures make this opera one of the all time great pieces of musical theater. Verdi’s ebullient musical farce gives a perfect description of the shenanigans in which Shakespeare’s oversized and overconfident knight engages. Making his Arizona Opera debut at this performance, conductor Eric Melear wove a web of intricate sound with his baton while remaining sensitive to the needs of the singers and paying close attention to musical and dramatic nuances.
Director Chuck Hudson effectively depicted the action according to Verdi’s libretto and the story could easily be understood without reference to the supertitles. His production gave the twenty-first century audience the illusion of sitting in Shakespeare’s Globe Theater. Douglas Provost and Peter Nolle’s set resembled the Bard’s theater. It seated a few members of the audience on the stage and placed a few more in balconies above. 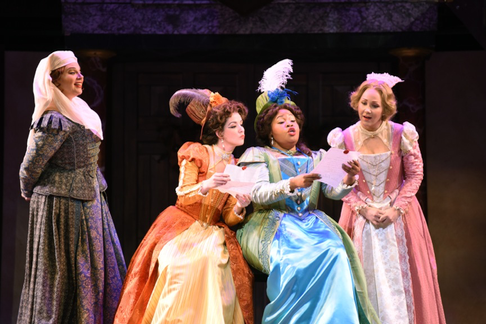 Dana Beth Miller as Dame Quickly, Alyssa Martin as Meg Page, Karen Slack as Alice Ford, Heather Phillips as Nanetta
Cece Sickler’s costumes were attractive, colorful and absolutely correct for the period. Falstaff, his girth maximized by huge pillows, dressed for his assignation with Alice in an orange and green outfit accompanied by a bright red codpiece. Selected on-stage audience members participated in the comedy at various points and cast members skillfully guided their participation. Two notable examples were the well deserved dumping of Falstaff into the River Thames, and the concluding masquerade into the woods beneath Herne’s Oak.
Bass-baritone Craig Colclough sang with excellent diction and a skillfully controlled voice all evening. He interpreted his role visually with exquisite comic timing and aurally with a wide range of dynamics and luminous bronzed vocal tones. His was a moving and sympathetic, but broadly drawn, portrayal of the fat knight. As Alice, Karen Slack sang with poise and radiant sound. Slack’s amply blooming high notes were especially brilliant. She and Heather Phillips, who sang Nanetta, stole the show as far as the women were concerned. Phillips did her best singing above the staff. These two women produced some of the sweetest notes and most finely shaped phrases of the evening.
As Ford, David Adam Moore sang an impressive monolog and created a realistic portrayal of the willful husband and father who capitulated when he realized his daughter was truly in love. Kevin Newell sang Ford’s choice for Nanetta’s groom, Dr. Caius, with burnished tones. Visually, Javier Abreu was a fine Fenton but his sound was a bit dry.
As Dame Quickly, Dana Beth Miller sang a resonant “Reverenza” that was a perfect response to Falstaff’s invitations. Alyssa Martin was an enticing Meg Page who sang with well-placed higher tones. Andrew Penning and Calvin Griffin, created the spirited characters of Bardolfo and Pistola with vocal charm and plenty of hijinks. Falstaff was a fun evening and a fine send-off for Ryan Taylor.
Maria Nockin