The Atrium Theater is a huge square room with overwhelming neoclassical architectural elements, said to seat 300. It sits atop the Veterans Memorial just next door to the War Memorial Opera House. The theater is a daunting space, posing enormous challenges to producers. Its possibilities are exciting and limitless. May the new management of San Francisco Opera rise to the occasion!
Obviously it is an impossible space for a natural acoustic to exist or to be consistent. Thus the room has been acoustically engineered to the ‘nth degree with all sorts of advanced technologies. Based on this performance of Svadba the sound was entirely satisfactory, if manufactured. 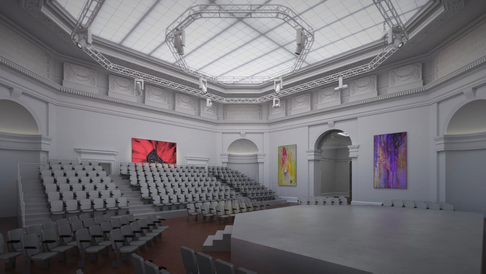 The Dianne and Tad Taube Atrium Theater in theater configuration
Svadba (2013) is a brief (55 minutes) opera by Serbian composer Ana Sokolovic (b. 1968). She lives in Canada. “Svadba” means marriage in Serbian, a slavic language, thus for these performances at the SF Opera Lab the title became Svadba-Wedding.
There are apparently marriage customs that straddle slavic cultures, one of which is the preparation of the bride’s hair for the marriage day, like Konstantin Makovsky’s enormous “The Russian Bride’s Attire” (1889) that hangs in San Francisco’s Palace of the Legion of Honor.†This is simply that. That Svadba is an opera is a question in itself. It may be more of a painting as there is little if any dramatic development. Mainly there is exposition of subject, like your eye following the story told in the fixed images — a painting.
The subject matter of Svadba is of far less importance than the delight you find in the way the story is told. Composer Ana Sokolovic created its seven moments with the six female voices, but they are not always a cappella. There were strategic dings of a bell, plus noises the six singers created with the few props as well as stomping, clapping and tongue clicking.
The sound world was enormous using the tones of trained voices that mostly moved in soundscapes of close intervals, though of course there was much rhythmic invention of syllables that were both nonsense and Serbian. To our Western ears the formulated voice sounds were all abstract (the sounds were so involving that we ignored the sparse supertitles). When there were melodic moments they were in the modal scales of slavic folk music, and this alone created a long ago and far away atmosphere.
There were two strategic and quite beautiful moments when the voices collided on the first inversion of a triad chord, and the grandiose final moment when the voices resolutely landed on a perfect fifth! It was good music. The six singers were superb musicians with beautiful voices.
The subject matter is essentially folkloric though its relevance surely has long disappeared. The metteur en scËne, perhaps the composer herself chose to update the imagery to contemporary dress and action. I found this disconcerting given my assumption of dated subject matter, though maybe there currently are some strange customs among Serbian women who live in Canada. However all this female maneuvering was a long haul for the guys sitting at my table (we sat on rented banquet chairs, like at a wedding celebration). We will have our male moment next month when we are offered a gang rape by stage director Calixto Bieito (Carmen, Act I).
The SF Opera Lab did not entrust the staging to a sophisticated stage director who might explore contemporary staging theories and conceptual practices, rather it was realized by Winnipeg, Canada stage director Michael Cavanagh (SF Opera productions of Susannah and Lucia di Lammermoor). Mr. Cavanagh’s concept was that we all were at the wedding resulting from the preparation of the bride’s hair. 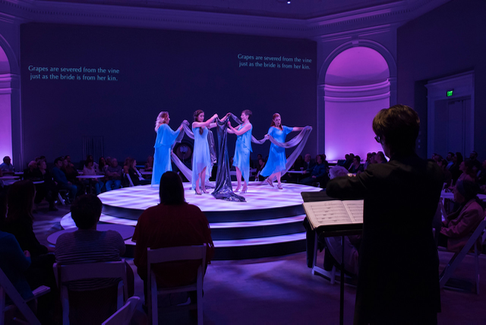 Preparing the bridal gown and audience at tables
The opera began on a platform in the middle of the room, then the action moved counterclockwise to a corner of the room, then a second corner, then the third, along the back wall, finally the fourth corner and then back to the center for the ending. It was tiresome, plodding organization.
All movement was abstract choreography in imitation of the music, often breaking natural movement into tiny bits of movement, like the fragmentary quality of the music. The lighting was sometimes fragmentary as well in flashes of pastel color. This music does not need, want or tolerate illustration, it merely requires focus and this we sorely lacked.
The magic of this splendid score was largely lost in this staging attempt. Note that the concept included champagne and wedding cake for everyone.
Michael Milenski