The productions are said to be shared with Venice’s La Fenice and Parma’s Teatro Regio. Unknown, at least unannounced is if these additional cities will have the splendid Elizabeth of now 68 year old Mariella Devia.
This incomparable diva sang Liu in Genova at age 64, followed the next year by her debut as Norma in Bologna. Her first Roberto Devereaux Elizabeth occurred in 2014 at Carnegie Hall, a performance that is nearly legendary.
Donizetti begins his opera by exposing the abilities and vulnerabilities of his queen as she threatens a terrible vengeance upon her rival for young Devereux’s love in the vocally daunting “A te svelai tutto il mio core.” Donizetti ends his opera with the emotionally exhausted old queen wreaking her vengeance in “Alma rea! Spietato core!” Finally, at her greatest anguish she abandons her throne to enter her tomb on a sustained high C. You knew it was coming, you gripped your arm rests, and with this great queen you triumphed. Well, maybe the C was a bit truncated. But it was powerful and real.
Mariella Devia’s voice is not ripe, nor is it warm. It is steely and technically sure, and fully subject to the mature musical intellect of a formidable stylist and, yes, it is the voice of a queen. These attributes determined the tenor of the performance. However it remained an opera about an over-aged singer more than an opera about an older queen inappropriately in love with a much younger man. But make no mistake, it was splendid way to spend a bel canto evening. 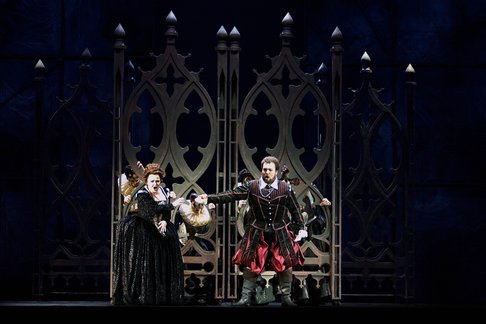 Sonia Ganassi as Sara, Stefan Pop as Roberto Devereux
Elizabeth’s rival is Sara, to whom she has confided her love of the traitor, Robert Devereux. Young Sara also loves Devereux and he loves her though Elizabeth has forced Sara to marry Nottingham who is Devereux’s best friend. You see that there is a lot to sing about. Sara was sung by esteemed lyric mezzo Sonia Ganassi, like la Devia a highly accomplished mature artist. The condemned Devereux was sung by Romanian tenor Stefan Pop who mostly confused singing with shouting, though he did offer a soft, sensitive and very beautiful “Ed ancor la tremenda porta non si dischiude?” Nottingham was sung by Korean baritone Mansoo Kim whose well applauded performance exhibited mastery of Italian style and technique in a beautiful, wooden, darkly colored tone.† 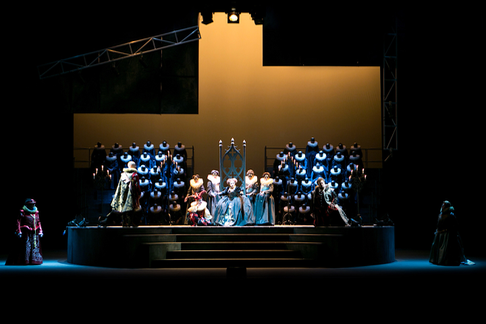 Principals on stage, Cecil and Gualtiero far left and far right in skirts
Cecil and Gualtiero are characters in the opera who facilitate some dreadful circumstances. They were confusing presences because they wore grand skirts but sang in baritonal voices. A primer on court dress of the 1600’s would have been helpful so we could have understood and maybe appreciated the self conscious exaggerations of the costumes, victims of intensely colored synthetic fabrics, outsized and distorted collar shapes, and naive gender bending. The men of the chorus were costumed in dresses as well.
The stage was minimal, only a platform on which the principals did their thing aided by six mime assistants (the chorus costumed in all black was deployed on the floor around the stage). A huge bird cage descended to be the prison in which Roberto sang his lament (bel canto like a bird singing [groan]). There were two trendy crooked trusses alluding to, surely wishing to reinforce the fact that the agonies were, after all, only theater to be lighted.
Stage director Alfonso Antoniozzi provided lots of swish. To the accompaniment of the overture’s play on “God Save the Queen” Antoniozzi dressed his queen in a huge golden imperial mantle that she would prosaically divest in the final scene, ninja acolytes raising the train to reveal a map of Europe. A singer himself Antoniozzi does in fact understand how to stage arias and numbers knowing that we do not need a lot of meaningless action to get us through ten or twenty minutes of powerful music.†
The pit was in the hands of young Italian conductor Francesco Lancillotto who could not find the breath and phrase of Donizetti’s bel canto, nor a solid, expressive ground for his accompaniments.
Michael Milenski