In these times of political madness, the new production of
Rimsky-Korsakov’s Golden Cockerel (zoloty petushok) by Oper am Rhein
in Düsseldorf arrives as a refreshingly funny opera. Dmitry Bertman
brings this political farce and sex comedy in a delightfully over-the-top
staging that made for a highly entertaining and musically engaging
production. If you happen to be in the area, it is definitely worth a trip
to Düsseldorf, as it’s also scheduled for next season.

The opera is based on a poem by Pushkin, whom Rimsky-Korsakov greatly
admired. Tsar Dodon convinces himself his neighboring country Shemakha will
attack. He summons an Astrologer, who gives him a golden cockerel to advise
him. The bird reveals the Tsarita of Shemakha desires expansion. The Tsar
sends his two sons into battle, but they come out defeated. Although in the
original libretto they die, Bertman keeps the opera light on drama and high
on comedy, so the sons return at the end. 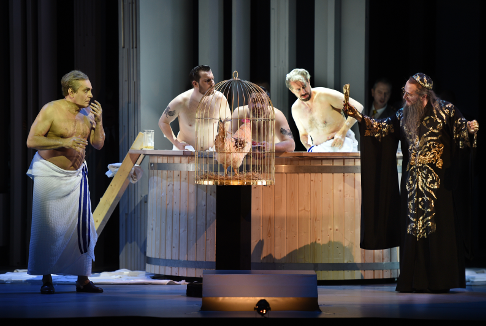 The second act takes place in Shemakha. To avoid conflict, the Tsarita
seduces the Tsar and tricks him into marrying her. While Act III is a bit
convoluted dramatically, Bertman directs it with a lighthearted approach.
The Astrologer demands the bride during Dodon’s wedding to her, but
the Tsar kills the him. Then the bird kills Dodon. In the epilogue, the
Astrologer leaves the audience with the message that everyone on stage was
unreal, except for the Tsarita and him. Make of that what you will.

Bertman’s Act I opens with Tsar Dodon, his two dunces of sons, and
his general in a hottub. The buffoonery of the royals and the incapacitated
state of General Polkan set the farcical tone for the rest of the evening.
These rampant drunks mix beer and vodka, while brawling and flashing each
other. Their behavior starts to make sense, once Tsar Dodon acts the most
devious: he feeds the unconscious General milk from a baby bottle. Bertman
included many of these suggestive moments that served as provocative
comedy..

The highlights of the evening occurred in Act II. On a comical level,
Bertman’s production made the audience laugh many times, and Antonina
Vesina enchanted with her irresistible vocal acrobatics, especially in the
“Hymn to the Sun”. She seemed to sustain her endless high notes
without any effort. Her vocal prowess is enough reason to go see this
production. The Tsarita’s knowing looks at the audience created some
tongue-in-cheek moments. 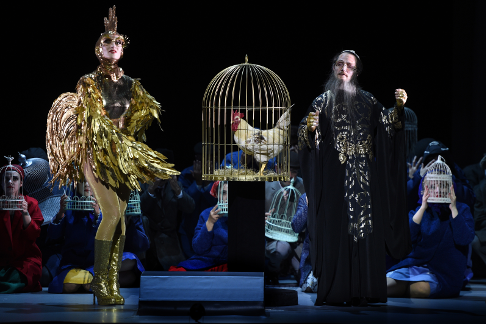 In several highly rhythmic passages, in which the Russian male
temperament seemed to echo, Statsenko kept up with the fast pace and
demonstrated intense stamina. The Russian baritone truly impressed in
Rimsky-Korsakov’s vocal demands, while delivering plenty of comedy
during his seduction by the Tsarina.

In Act III, the Tsar and his entourage return from Shemakha–in this
case with lots of tax free shopping from Paris. Bertman creates a vibrant
tableaux vivant with the choir in high gear and a full parade. Renée
Morloc demonstrated great comedic timing as Amelfa, the Tsar’s
secretary. A rich voluptuous voice with a hint of mischief. With turbo
blond hair on top of her head and a big caboose, she played off Stetsenko
in highly comedic sexual innuendo. In act III, an exasperated Amelfa
devours the now roasted cockerel; Morloc proved herself priceless in this
scene.

As golden cockerel, Eva Bodorova dressed up in flashy golden costume
that would easily seem at home in a Las Vegas show. The man behind me
gasped “geil”, a common German word to describe the
titillating. Her golden tenue reflected light as she appeared from the
sides of the balcony. With her commanding and crisp voice, she drew all the
attention to her.

Unrecognisable in his wig and wizarding tenue (one of the imaginative
and detailed costumes by Ene-Liss Semper), Cornel Frey offered a creepy,
enigmatic air to the Astrologer’s voice. Roman Hoza and Corby Welch sang
decently. Their mere presence on stage as Tsar’s bumbling offspring
added to the political commentary on royal heritage.

Conductor Alex Kober continued to propel the narrative forward in Act
III through well paced momentum in the Dusseldorfer Symphoniker.
Rimsky-Korsakov’s score consists of lots of exotic colours from the
woodwinds. His Sheherazade often came to mind.

In great detail, the conductor punctuated Bertman’s comedy,
amplifying the hilarity on stage. Kober effectively balanced the orchestra
and the singer, while allowing the choir, prepared by Edward Kurig, to
burst with invigorating energy. Although the Russian language was hard to
discern.