They added color and texture to the setting and placed the scene amid the beauty of a Japanese spring. Cio-Cio San’s red wedding kimono was a beautiful work of art, but many more of Anibal Lapiz’s costumes appeared in soft shades reminiscent of Japanese watercolor paintings. Even the usually flamboyant, swaggering Prince Yamadori wore muted colors.
Latonia Moore was a credible, poignant Butterfly who brought the geisha’s tragedy home. She has a creamy lyric voice that resounded with beauty of tone throughout the auditorium and her phrases were delivered with a quality of tone well suited to the expression of their meaning. Her acting was believable and her characterization of the abandoned young wife became totally convincing. Every woman in the audience could relate Butterfly’s plight to memories of waiting for the phone to ring.
Romanian tenor Teodor Ilinc?i has a robust voice with pleasing qualities and the right amount of heft for Pinkerton. He was virile, charming, even ardent, but uncomprehending in the first act when the voices of tenor and soprano blended with great intensity. Later, he showed real horror at what his actions brought about. Baritone Anthony Clark Evans is completing his second year at the Lyric Opera of Chicago’s prestigious Ryan Opera Center. He was a dignified Sharpless who sang with burnished bronze sonorities. 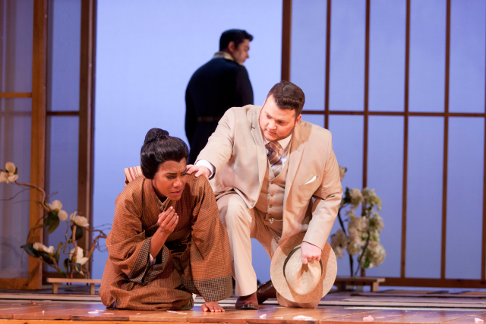 J’Nai Bridges is Suzuki, Anthony Clark Evans is Sharpless and Teodor Ilincai (background) is B.F. Pinkerton
As is usual with San Diego Opera, committed fine artists inhabited the smaller roles. J’Nai Bridges was a caring and compliant Suzuki. Joseph Hu was a thoroughly amusing Goro, Scott Sikon a frightening Bonze, and Bernardo Bermudez a pretentious Yamadori. As Pinkerton’s American wife, Kate, Katerzina Sadej, had no idea of the actual situation until she saw Butterfly. Charles Prestinari’s chorus added musical color to the scenes in which they sang. Because the second and third acts were joined, we heard some of the very beautiful music that Puccini wrote as part of the opera’s first version that depicts the night before Pinkerton returns to the home he kept for Cio-Cio San.
The San Diego Symphony Orchestra under the baton of Yves Abel performed Puccini’s score with impressive dramatic qualities. His tempi were sometimes a bit slow, but he brought out the immense pathos of Puccini’s score. This Butterfly left many patrons weeping tears of sympathy. I left the theater thinking of C. S. Lewis’s comment, “Tragedy is more important than love. Out of all human events, it is tragedy alone that brings people out of their own petty desires and into awareness of other humans’ suffering.”
Maria Nockin