The company’s brave and bold choice to end its 43rd season
with Carlisle Floyd’s Of Mice and Men based on John
Steinbeck’s classic novella is the latest in that canon, with the
145-minute production stage directed by Winnipeg-born Michael Cavanagh held
April 23, 26 and 29, at the Centennial Concert Hall. 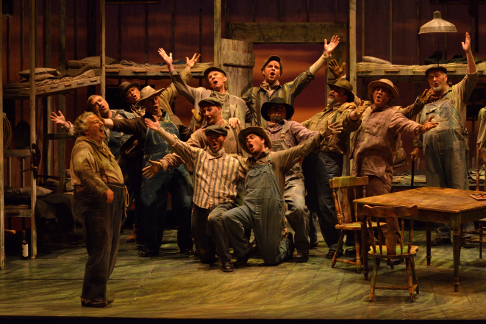 Set at the height of the Great Depression, Steinbeck’s 1937 tale
(later morphed into a play and film) tells of two migrant workers, George and
Lennie, who dream of owning land until the latter’s penchant for stroking
soft rabbits, puppies and baby mice literally to death ultimately leads to
tragic consequences. Like shucking an ear of corn, Floyd has stripped
Steinbeck’s text to its core essence, while adding poetic license to his
operatic version that premiered in 1970.

Marking his MO debut, Michael Robert Hendrick’s deeply compassionate
portrayal of the hulking Lennie, described in today’s kinder, gentler
terms as a person labeled with an intellectual disability, perfectly balanced
his character’s raw emotional vulnerability with volatile, brute
strength. Hendrick resisted all temptation to fall into easy stereotypes, while
also nailing Floyd’s wide dissonant leaps and melting lyricism as he sang
of “living off the fat of the land,” projecting both heartbreak and
eternal hope.

Winnipeg’s Nikki Einfeld appearing as the attention-starved, aspiring
Hollywood starlet simply called “Curley’s Wife” brought
prismatic colour to her tarty role, slinking about the stage and wheedling the
lusty ranch hands for sex that made the bunkhouse hotter than a heat wave in
July. Her impeccably controlled, flexible soprano voice impressed as she
artfully shaded her dynamics on her uppermost notes. 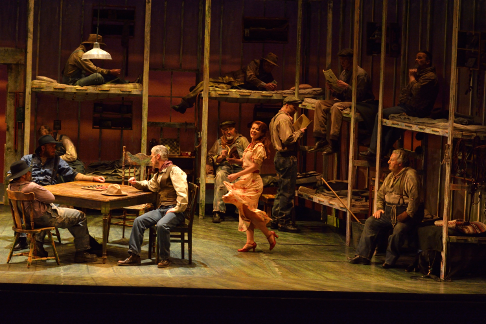 Former Winnipegger Gregory Dahl also delivered a strong performance as
George, with his robust baritone matching Hendrick’s vocals note for
note. His Act I solo in which he tells how his life “would be so simple
by itself” created soulful, introspective counterpoint to Lennie, and
particularly when he sings “One day soon” during their subsequent
duet.

Also making his MO debut, American tenor Joel Sorenson plays the sadistic
Curley like an explosive powder keg ready to blow. However, had we been shown
more emotional undertow and multi-layering with his characterization, his
whip-cracking fury would have become more potent by contrast. Less is often
much, much more, and the brief moments during Act II in which he (almost)
becomes pulled in by his wife’s seductive ways provided critical sub-text
— albeit all-too-fleeting. Relationships are paramount in opera, and too
often these rang hollow.

The libretto’s pacing is somewhat challenging, and the opera teeters
toward melodrama. The narrative’s relatively scant action only diluted
the dramatic tension and overall forward thrust. The opening scene, in which
police sirens wail, and blinding searchlights penetrate the darkness, is
ironically more powerfully urgent than the show’s climax in which George
ultimately pumps a bullet into Lennie’s head as an act of mercy.
Strangely, Curley’s rabid lynch mob falls (mostly) silent when they
should be reaching a fevered pitch during the finale.

Still, Steinbeck’s timeless tale about shattered dreams still
resonates nearly 80 years since first penned. Kudos to MO for choosing
lesser-performed works, and giving voice to those who once held — or
continue to do to — their own wistful longings for home.