This opera semi-seria also has a counter-element in the form of
Bellini’s only comic operatic role, although just as much laughter is
generated by the more farcical improbabilities of the melodrama — a knife
swung in a desperate frenzy gets caught in a cloak and misses the heart; a
lover prepared to kill himself in unrequited misery is cured of his infatuation
in the twinkling of an eye.

If the comic and serious elements don’t knit into a coherent whole,
the fault probably lies with the minor French writer François-Thomas de
Baculard d’Arnaud (1718-1805) whose novella Anecdote anglaise
provides the raw material for Tottola’s libretto (which had previously
been used by Valentino Fioravanti for the Teatro dei Fiorentini in Naples in
1816). D’Arnaud’s sappy text is less a narrative than a series of
implausible episodes but it is typical of the sort of sentimental drama so
popular in Neapolitan theatres during the early nineteenth century —
indeed, several of d’Arnaud’s novels and verse dramas were the
sources for opera plots, including Donizetti’s La Favorite
— and we should probably not judge librettist or composer too
harshly for the undeveloped characterisation and haphazard dramatic
development.

As always, Opera Rara deserve credit and gratitude for once again
mining the archives in order to resurrect forgotten works of the past and
allowing us to re-assess composers’ reputations and development. This
fine performance at the Barbican Hall, with the BBC Symphony Orchestra
conducted by Daniele Rustioni, has resulted in the production of a new critical
edition using Bellini’s original score. And, the concert staging revealed
a young Bellini keen to impress the Neapolitans — his teachers, fellow
students and, he hoped, the paying public — absorbing elements of the new
‘Rossinian’ style and showing distinct, if only intermittent, signs
of his own musical voice and of the long-breathed melodic curves that would
earn him the nickname, ‘the Swan of Catania’. 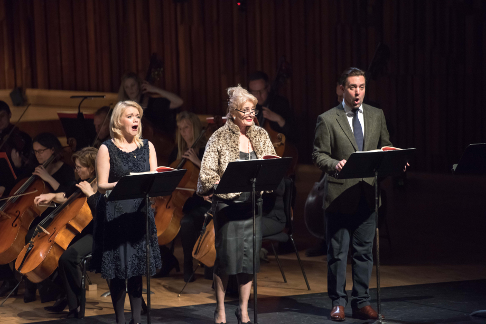 Bellini must have had high hopes for this ‘graduation piece’ for
the Real Collegio di Musica di San Sebastiano in Naples. Performed originally
by an all-male cast — even though there are three female roles — it
proved so popular that it was reprised at the Conservatory every Sunday for a
year, and the Intendant at the Teatro di San Carlo was prompted to commission
Bellini’s first professional opera. It has also been suggested that the
opera was also designed to impress the parents of Maddalena Fumaroli, a singing
pupil of the composer, whom he hoped to marry.

There was disappointment all round though: the Fumarolis were not moved by
the opera’s success and Bellini’s attempt to secure a professional
production proved fruitless. He revised the original three-act score (which was
never published), creating a two-act opera buffa version which
remained unperformed. Bellini must have recognised the work’s musical
merits though, for he plundered it, cherry-picking some of the best bits for
re-cycling in later works. So, Salvini’s cabaletta turns up in Il
pirata, the cantabile interlude ‘Ecco signor la
sposa’ from the Act 2 finale was recast for La straniera, and
Nelly’s romanza ‘Dopo l’oscuro nembo’ was
reshaped into Giulettia’s ‘Ah, quante volte!’ in I
Capuleti e i Montecchi.

The action is set in seventeenth-century Ireland and concerns the melancholy
Lord Adelson and his impassioned protégé, the Italian painter
Salvini, whom Adelson has befriended. Unfortunately, back on
M’Lord’s Irish estate Salvini becomes starry-eyed when he meets
Nelly, Adelson’s betrothed. Nelly’s exiled uncle, Colonel Struley,
uses Salvini’s adoration as a means to get revenge on his
‘enemy’ Adelson: while the latter is in London, the first of
several false letters arrives. Apparently written by Adelson’s father, it
tells of Adelson’s impending marriage to a London noblewoman. Salvini,
who has been charged by his master with the care of Nelly, tries to comfort her
in her distress but as his ardour grows he becomes increasingly distraught,
bordering on insane. With the help of Adelson’s unscrupulous servant,
Geronio, Struley attempts to abduct Nelly so that he can force to her wed a
rich French friend. Salvini foils his plot but during the chaotic kidnapping
and chase, fears that he has killed Nelly. Adelson’s return ensures a
happy ending. Despite Salvini’s fears, Nelly is safe and sound and
preparing to marry Adelson. Salvini, miraculously purged of his romantic
fixation, is given an allowance and despatched back to Italy. He vows to return
in a year, to wed his young pupil, the orphan Fanny — his compensation
prize. 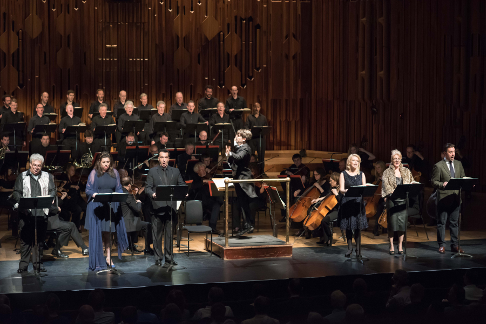 There were several changes of cast from the originally advertised line-up,
but fortunately Italian bass-baritone Maurizio Muraro stepped into the shoes of
Salvini’s servant, Bonifacio, as planned, for he instantly leapt
light-footedly to life and created a three-dimensional character whose
irreverent pragmatism in the face of the prevailing over-emotionalism was
entirely winning. Bonifacio sings in Neapolitan dialect and Muraro relished the
text, dealing deftly with the patter in his Act 1 cavatina, ‘Bonifacio
Beccheria qui presente’ and resonantly questioning why Salvini believes
he’ll never find another girl as sweet and beautiful as Nelly. After all,
whether named Nell-y, Mariann-y, Ros-ì, Pepp-ì, Che-cchì Fann-y,
or Caro-lì … all those who end with ‘i’ are equally
devilish [diavol-i]! Muraro’s full-voiced artistry was as subtle
as his acting; this was a superb performance.

Replacing Lawrence Brownlee as the would-be Werther (Goethe’s
eponymous novella was published two years after d’Arnaud’s
Anecdote), Italian tenor Enea Scala was fittingly handsome and ardent,
but he didn’t get into his stride until the second act. Perhaps this is
forgivable for Salvini is introduced to us in a wickedly stratospheric
cabaletta which forms part of a duet with Bonifacio — but which is the
first full solo statement for the lead tenor and so functions like an entrance
aria — and which includes an outlandish surfeit of high Cs, Ds and even
an E. Scala nailed them all and the hypersensitive painter’s
extravagant vocal roulades — ‘Pietà crudele!’ —
but not without some strain and a rather hard edge to the tone. The elegance of
line required rather more mellifluousness.

However, the tension in Scala’s tenor lessened markedly once the
testing opening was under his belt and his Act 2 duet with Simone
Alberghini’s Adelson, ‘Torna, o caro, a questo seno’, was
moving and dramatic: unaware that they are rivals in love, Adelson asks Salvini
to safeguard Nelly in his absence while the painter is increasingly
destabilised by the thought of the forthcoming nuptials. Best of all was the
Act 3 aria in which Salvini begs to be killed; this number was meltingly
beautiful and utterly entrancing, and Scala revealed a greater flexibility and
polish than Act 1 might have led us to imagine he possessed.

Alberghini (who replaced the scheduled Nicola Alaimo) initially lacked vocal
colour and impact, and he did not seem entirely comfortable embodying an Irish
patrician, but the Italian baritone was technically secure: muscular in the
broader phrases, nimble in the more elaborate passages.

Daniela Barcellona was a gentle-natured Nelly. She sang her Act 1
romanza with delicacy and a soft-grained mezzo which, while beautiful
and affecting, needed greater ampleness to travel through and over the
orchestral fabric. Barcellona was quite subdued, too, in more florid passages
but she imbued the role with great dignity.

In the minor roles, bass David Soar (Geronio) and Russian baritone Rodion
Pogossov (Struley) were a dastardly pair whose characterisations were
energetic, but whose attractive tone and vocal restraint prevented them
slipping into parody. Mezzo-sopranos Kathryn Rudge (Fanny) and Leah-Marian
Jones (replacing Patricia Bardon as Madam Rivers) had little to do except
satisfy the conventional balance of vocal forces but they both acquitted
themselves well.

The (scaled-down) BBC Symphony Orchestra were on sparkling form under
Daniele Rustioni’s baton, playing with impressive rhythmic bite, bright
tone and varied colours, obviously inspired by their conductor’s lively
engagement with the drama. The playing of the four horns particularly
impressed: we were treated to spot-on intonation, appealing tone, impressive
clarity and subtle pianos. Rustioni bounced and bopped on the podium,
constantly involved with the characters, glancing over his shoulder to cue,
coax or embolden his cast. The overture was full of interest — harmonic,
rhythmic and dynamic. Rustioni demonstrated equal instinct for the eloquence of
the bel canto idiom and the score’s Rossinian gestures. The
graded crescendos and hastenings were perfectly judged, though at times I felt
that the conductor wanted to push even harder on the accelerator pedal, but was
sensitive to his singers. The male voices of the Opera Rara Chorus (replacing
the BBC Singers) were strong of tone as Adelson’s servants, and if the
basses and baritones tended to out-sing the tenors, then the ensemble had been
well-marshalled by chorus master, Eamonn Dougan.

This was a concert staging, but stage director Kenneth Richardson’s
slick managing of the singers’ entrances and exits created a sense of
dramatic continuity that would not have been achieved had the cast been seated
on stage — and which was often not present in the libretto! Somewhat
oddly, Bellini chose to employ the French opéra comique
convention of spoken dialogue rather than secco recitative, but with
the majority of the spoken text delivered by native Italians, dialogue director
Daniel Dooner must have had a fairly easy task.

Bellini’s score may be a rather loose dramatic concoction and have
more than a few melodic clichés but it contains much of interest too. It
points intriguingly to the composer’s all too brief future career. And,
with only ten other operas for the Bellini aficionado to enjoy, it’s good
to add another to the list.