The political situation made the legendary opera house’s new
production of Paul Hindemith’s Mathis der Maler (Matthew the
Painter) all the more urgent. This intellectually stimulating, musically
enthralling, and utterly exhausting experience, made for a rare, highly
enriching and unforgettable trip.

Though a popular composer with the avant-garde youth in Germany during the
interbellum, Hindemith’s eleven operas are nowadays rarely performed. You
might recognize the opera’s title from the composer’s instrumental
precursor Symphony: Mathis der Maler. For the opera, he wrote his own
libretto. Instead of Acts, Hindemith structured his magnum opus in seven
Bilder (paintings).

Inspired by a visit to Isenheim and the altarpiece of “The Temptation
of St. Anthony” by painter Matthias Grünewald (1470-1528), Hindemith
identified the Nazis’ artistic oppression of him with the painter’s
struggle against the powers that be during the Great Peasants’ War–the
largest uprising against the aristocracy before the French Revolution. Later,
the Nazis would ban Mathis der Maler. Propaganda strategist Heinrich
Goebbels declared Hindemith an “atonalen Geräuschemacher”
(atonal noisemaker). 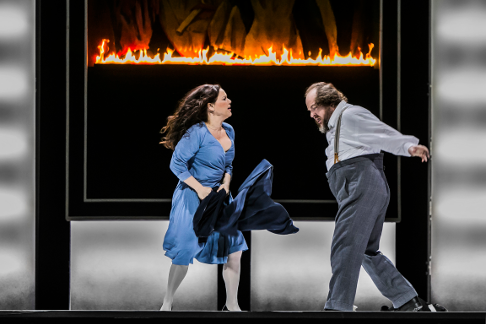 With the scope of grand opera, Hindemith’s libretto nearly
mythologizes the painter. Although the Cardinal protects him, Mathis joins the
peasant cause and helps its leader Schwalb and his daughter Regina escape from
religious persecution. Even though conflicted, Cardinal Albrecht is financially
broke, so supports the wealthy. In the massive choral scenes, a book burning
leads to a peasant uprising, then an aristocrat is publicly lynched, when the
law ends the uprising with a public massacre.

There is also romance. Mathis has an unfulfilled love for the Protestant
merchant Riedinger’s daughter Ursula, who must marry Cardinal Albrecht.
They don’t, because Albrecht recognises her true convictions. After
Schwalb’s death, Ursula ends up caring for the dying Regina. Mathis
rejects Cardinal Albrecht’s offer for renewed protection. In the end, the
painter bids farewell to all. The story and Hindemith’s industrious score
make for consuming opera.

There was a dark, sarcastic undertone that reminded of director/provocateur
Calixto Bieito’s unsettling ambiences. Biganzoli portrays the powerful as
corrupt, sinful hypocrites through Gestapo leather kink, and a philandering
Cardinal. Also, during the peasant uprising, a body hangs dangling from his
feet upside down over the stage till the scene ends. A bit too abrasive for my
taste. 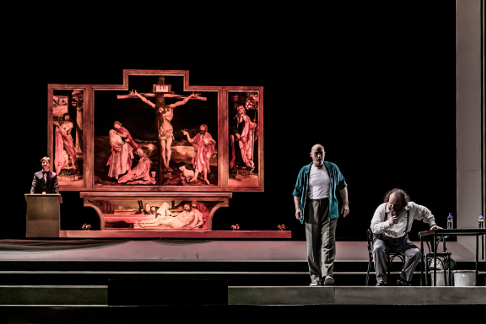 The last piece is Hindemith’s own rejected opera. After a recording
with Goebbels speaks out against (I assumed) Hindemith at the beginning of Bild
7, the final statement involves a stage with a missing orchestra. The topic hit
close to home with the current lack of political support for orchestras. This
felt particularly urgent concerning the EUYO.

Markus Marquardt triumphed in the technically demanding lead. He offered a
human take of the womanizing heroic artist. With his first aria “Sonniges
Land” Marquardt demonstrated his wide range and stamina. Such power! His
conflicted duet with the fierce Kremer enflamed Bild 3. They produced
the highlight of the evening in a battle of frustrated romance presented with
refined agita and impossible stamina, resulting in exhilarating chemistry. In
Bild 5, Kremer had another showstopper with Daszak. Utterly displeased with the
Cardinal, Kremer fired up her voice matching Young’s orchestral
intensity.

Herbert Lippert put down a decent Schwalb with a depth that generated a
protective vibe. Emily Dorn distinguished Schwalb’s daughter Regina with
a resilient vibrato that perforated the orchestra’s volume, while
retaining a vulnerable, touching, and utterly virtuous presence.

Simone Young made her debut at Semperoper. She produced a muscular sound
from the Dresden Staatskapelle. While Hindemith’s score contains drab
passages, Young produced a relentless momentum. Sometimes her forte
fortissimo conducting led to overpowering volume that occasionally
eclipsed the vocals, though most of the time, the soloists fit in Young’s
musical fold.

This demanding production of Hindemith at the Semperoper should be commended
for its audacity. This rarity must be brought back, because opera fanatics
deserve to hear such an intelligent and provocative production of
Hindemith’s masterpiece. Impressive how the Semperoper made such a big
risk pay off.