Such was the production mounted by Opera ParallËle, an ambitious San Francisco operatic enterprise that offers two productions each season in theaters appropriate to specific repertory. The Lighthouse took place in the Mission district’s 300 seat, very arty, black box Z Space. Earlier this season Champion, an Opera in Jazz was performed at the SFJAZZ Center.
Peter Maxwell Davies (pronounced Davis) became resident of the bleak Orkney Islands above Scotland’s most northerly coast a few years before composing this bleak operatic masterwork about three real-life keepers who vanished from a lighthouse on a bleak island far off Scotland’s west coast. These Scottish extremes remained in fact a powerful Davies muse, interweaving climatic challenge with emotional isolation. A huge body of affective and very effective music results from these complementary components.
The Davies stage pieces, The Lighthouse in particular is not a narrative, rather it is like an ABA musical form: exposition, development and recapitulation (with a twist). The musical forces (12 fine instrumentalists) mustered by Opera ParallËle succeeded in creating climatic and emotional chaos, transforming it from time to time into ballads and hymns that organized the inherent despair of the lighthouse keepers. Crucial to the success of this production was the presence of the musical ensemble on the acting stage itself, this immediacy infused an almost overwhelming musicality into the performance. 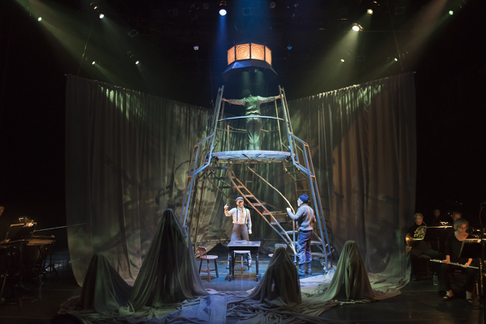 The percussion sat stage right, the balance of the ensemble and conductor were stage left enveloping within the music the three singers and the lighthouse of skeleton steel with its huge beacon lamp. The supply ship relief crew were at once the lighthouse keepers and the demons that inhabited and destroyed this troubled humanity. The final wallop, and it was complex and huge, happened when the chaos of all unknown and unsolved mysteries erupted into a final hysterical hymn.
Stage director/designer Brian Staufenbiel used no more than the named props — a table and two chairs, a lighthouse, and the sea. The sea itself was created by four ninjas who brandished poles of gauzy cloth and who themselves became the rats of the libretto. The three singers were always positioned or moved musically rather than dramatically. Costuming and lighting fulfilled a cool professional production standard.
All three singers were impressive, baritone Robert Orth added histrionic depth, bass-baritone David Cushing brought rich, evangelist tone, and tenor Thomas Glenn found true beauty of tone in his love song.
Conductor Nicole Paiement ably kept the complex musical forces together, coaxed careful, fine playing from her ensemble and drove the Davies score to a searingly effective climax.
Michael Milenski